I Dream of Jeannie Slot 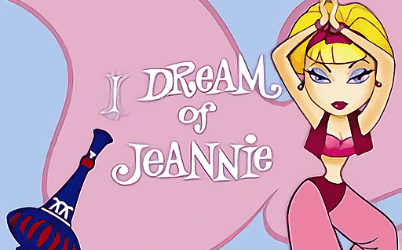 Game Provider: IGT
1
Play I Dream of Jeannie For Free!
Bookmark It For Later
Demo Not Available, Use The Offer Below To
Play for Real Money Now!
Showing , United States
EDIT LOCATION
locale:
Loading...

I Dream of Jeannie Slot Review

I Dream of Jeannie is one of the most successful games in the huge range of slots from IGT. It’s based on the classic TV show and despite the fact that the series ended in 1970, its popularity has made the slot machine a hit years later. If, like the majority of slots fans, you play from home, then it’s bad news. Unfortunately I Dream of Jeannie is only available at land-based casinos.

But if you like to play at real casino sites, then this slot is sure to one of the games attracting the most attention. The popularity of the I Dream of Jeannie slots game isn’t just down to the fact that it’s based on one of the biggest TV shows. This game also comes with amazing 3D graphics that make the magic-themed symbols seem to pop out from the screen.

That’s a whole lot of bonuses, but only good to you if you are at a physical casino. We would love to recommend the very similar Bewitched slot machine, and while it’s a great game, this another IGT title that’s only found at land-based sites. However, our ever-resourceful team have found a fantastic slot with a similar look and feel that you can play at some of the top online casinos, and even on Android or iOS mobile devices.

Setting Up I Dream of Jeannie

I Dream of Jeannie follows the classic five-reel, 30-payline format. You win by landing three or more of the same symbols across a payline from left to right. You can play for stakes of between 0.50 and 6.00 per spin, making this a slot aimed at casual players and not for the high rollers among you. IGT like to make it as easy as possible to get started on their slots, and I Dream of Jeannie uses simple plus and minus buttons to adjust wagers.

There’s also the option to spin the reels automatically, which gives you time to just sit back and relax while the machine does all the hard work. Jeannie used her magical powers to make her life easier in the TV show, so why shouldn’t you?

If you want to see how much each symbol pays out when it crosses a line, just click the paytable button and all is revealed. The table also outlines how bonuses work, but because there are so many in this game you could spend quite some time reading it. Perhaps it’s easier to just spin the reels, as any time you trigger a bonus round instructions pop up on the screen anyway.

I Dream of Jeannie uses symbols based on the cartoon characters that you see in the opening credits of the show. It’s perhaps a shame that you don’t get real images of the cast, which included Barbara Eden as Jeannie and Larry ‘J.R. Ewing’ Hagman as her long-suffering husband, Major Anthony Nelson.

Cartoon symbols or not, this is one good-looking slot machine. The 3D effects are fantastic and help to bring the reels to life. Along with magic carpets, genie bottles and Arabian-style shoes, you will see playing card symbols making up the lower-value but more frequently seen combinations.

What you really want to do is trigger the various bonus features, as these can make all of your wishes come true. Well, maybe not all of them, but they can certainly add lots of cash to your bankroll.

A wild symbol acts as others to complete combinations, while the main bonus symbol appearing in any three or more places brings a special fortune wheel into action above the reels. This randomly picks a bonus round when it comes to a rest.

Extra features include 'A Blink of Jeannie’s Eye' where during the next five spins, up to 15 symbols are transformed into matching icons. 'The I Dream of...' feature has you picking characters from the show. You earn win multipliers when the characters don’t match and once you uncover two of a kind, you win a prize. It’s a great round where you want to find as many un-matched symbols as possible, earning more and more multipliers before matching any characters.

The best round, however, is the 'Progressive Pick' round. You simply choose from the symbols lined up to uncover any of the five progressive jackpots. Like all good genie’s, you get three chances to find your dream prize in this exciting round.

The Verdict and an Online Game to Play

We loved the I Dream of Jeannie slot game, although if you are not a fan of the show, then the style might not appeal to you. The bonuses will appeal to anyone though, as IGT have worked their magic on this game and bottled up a huge range of extra features into it.

If you want to try out a similar game at some of the top Pennsylvania slot sites or top New Jersey slot sites, take a look at Witch Pickings from NextGen Gaming. It comes with some glamourous cartoon witches and lots of exciting bonus rounds. Stacked symbols, expanding wilds, free games, win multipliers and more have made Witch Pickings a hugely popular game.