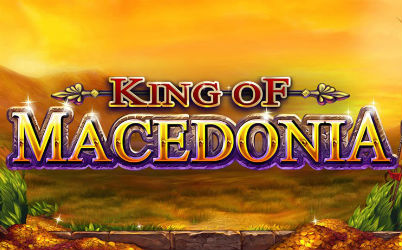 Game Provider: IGT
Play King of Macedonia For Free!
Bookmark It For Later
Demo Not Available, Use The Offer Below To
Play for Real Money Now!
Showing , United States
EDIT LOCATION
locale:
Loading...

King of Macedonia is a historical-themed slot game from IGT that’s filled with images of vases, musical instruments and treasure chests from times gone by. A royal couple help you out by paying some of the top prizes and launching some awesome bonus rounds.

For a bit of background information, if you have ever studied ancient history, you will know that Alexander the Great was the King of Macedonia. He conquered much of Europe, North Africa and Asia before he was even 30 years old. Although he was never defeated in battle, he didn’t live long enough to enjoy his reign, dying aged just 32.

That’s enough history for today, so let’s get back to the King of Macedonia slot game, which you will find at some of the best online and mobile-compatible casino sites. IGT have lavished plenty of color and detail on this great-looking online video slot.

The symbols include a beautiful Macedonian Queen, while Alexander himself is an imposing figure who triggers some of the special features that have made this game so popular.

Giant wild symbols, win multipliers of up to 10x and a special free spins game with locked wilds are all features that are designed to boost bankrolls. If you are playing at the maximums stakes, you could be claiming wins of up to 20,000.00 when the best possible mix of symbols and multipliers are landed.

Whether you like history or not, the potential rewards on offer have made the King of Macedonia a slot game that you shouldn’t miss.

King of Macedonia is a 5-reel, 40-line game. You don’t have to play at the maximum stakes to enjoy all the rewards of this game and can spin the reels from as little as 0.80. That makes it suitable for players who just want to risk small stakes, but high rollers can wager a massive 1,600.00 per spin, with plenty of options in between these limits for the rest of us.

You win multiples of the per line bet, or 1/40th of the total stake, when 3 or more of the same symbol land across a payline starting from the left side. It’s a standard way of landing wins that will be familiar to anyone who has played slots before, but don’t worry if you are new to these games, as it’s very easy to understand.

To make the King of Macedonia slots game even easier to follow, just open up the paytable via a button above the reels. This lists how much each combination is worth to you, while also featuring details of how the bonuses work. With unusual features such as locked wild symbols and Gigantic Wilds appearing, it’s worth checking it out.

You get to enjoy all the features and impressive visuals of the King of Macedonia slot when you play on a desktop computer, Android or iOS mobile device. It’s one of the reasons why this has become such a hugely successful game for IGT. The mobile version even carries over options such as Autoplay, which sets the reels spinning on their own for as long as you want. The game might be set in ancient times, but the way it works is right up to date.

A bright blue and purple color scheme gives the King of Macedonia slot game an opulent style, fitting for the subject matter. A backdrop of rolling fields and mountains helps to set the scene and the soundtrack adds a dramatic touch to the action on the reels.

Symbols are equally impressive, with scrolls, vases, treasure chests and a black horse all appearing. The beautiful Queen pays up to 200x your line stake when she crosses the reels. Any win will be randomly multiplied by 2x, 3x, 5x, or even 10x over if the golden shield bonus symbol lands on the left side reel.

The imposing figure of the King himself helps out in a couple of ways. He’s a wild symbol, able to act as all except the shield if he can complete runs of matching symbols. To help him complete his task, IGT have made this a so-called Gigantic Wild, which is 2 reels wide and 3 rows high. If you’re lucky, he will cover 2 entire reels, leading to lots of cash awards in a single spin.

The main bonus feature, however, is the King Free Spins round. If the golden shield lands on the left reel at the same time as a Gigantic Wild symbol, you are awarded 8 free games. Any wilds that were seen in the triggering spin will stay locked in place throughout the feature. That can lead to win after win if you had a couple of wilds in view.

Our Verdict and a Similar Slot to Try

IGT have pitched the King of Macedonia slot at a wide audience and seem to hit the bullseye. It follows a popular topic, looks fantastic and has some nice bonus features. It’s a medium volatility slot, so you should land wins fairly frequently, and has an average return to player percentage of up to 96.1%.

For a change of scenery, why not take a look at King of Atlantis? This slot is actually part of the same family, with identical gameplay and bonus rounds, but moves the action to a mythological underwater realm.

The graphics are just as impressive, so whichever you decide to play, you will be able to enjoy great-looking games. Why not join any of our top New Jersey slots sites or top Pennsylvania slots sites and play them both?