Play Lost Island For Free!
Bookmark It For Later 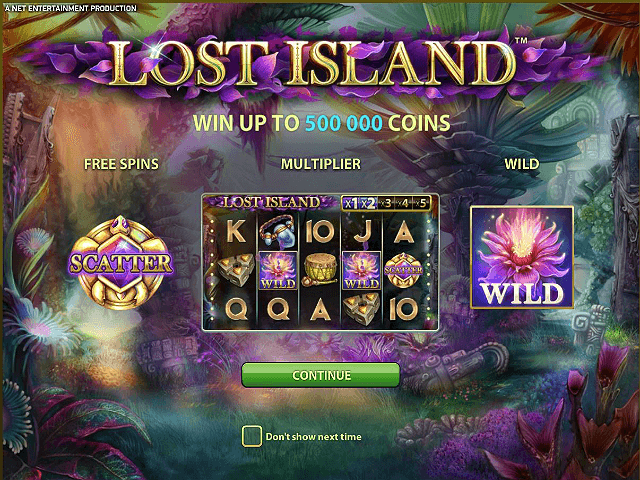 Explore the mystical beauty of a lost island with this mysterious slot game from NetEnt, available to play now at bgo Vegas. The inviting Lost Island is littered with the ancient relics of a forgotten tribe, so it’s the perfect setting to spin those reels while hunting for hidden treasures.

As you'd expect from the world-leading game supplier, NetEnt’s Lost Island has great graphics, a fun theme and an attractive storyline. The tranquil vibe and easygoing island music makes it feel as if you’re on a refreshing tropical retreat.

This easy-to-play slot has three rows, five reels and 20 adjustable paylines, with players able to bet from 1p to 50p per line. In addition, players can select one of the 10 betting levels to increase their stake even more. The slot also boasts handy features such as Quick Spin, Auto Play and Max Bet buttons to speed up the gameplay. Requirements can be set to manage your budget.

As you spin the reels, you'll aim to collect three or more matching symbols, with winning combinations valid from left to right. The symbols range from the standard 10, J, Q, K and A to glittering treasures like blue crystal jewellery and a green drum. The highest paying symbol is a mysterious golden mask surrounded by red jewels.

NetEnt wouldn’t be NetEnt if it hadn’t included several rewarding bonus features. In addition to the main symbols, players should keep an eye out for the Wild multiplier, which is a glowing purple flower. Wilds can appear anywhere on the reels during the main game and substitute for all symbols except the Scatter. Up to five Wilds can appear at once, multiplying your win by up to five times.

At the beginning of the Free Spins bonus a Wild symbol will appear in the centre of reel three. The symbol will remain there until the end of the feature. This is great bonus, giving you a higher chance of bagging those big wins. In addition, Wilds can appear as single symbols or in stacks of two or three during your Free Spins.

With an amazing theme, captivating graphics and so many amazing and rewarding features, NetEnt shows that it might not be so bad to be stranded on a Lost Island. When can we go?