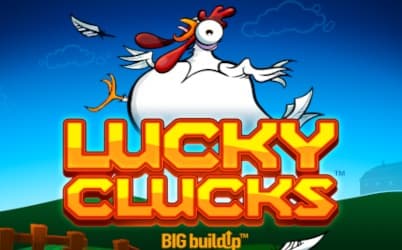 The Lucky Clucks slot is a fun, cartoon-style game set in a barn, where chickens lay valuable eggs worth up to 3,000x your wager at the top New Jersey online casinos or the best Pennsylvania online casinos. It’s a desktop and mobile game from Crazy Tooth Studios and Microgaming with a high level of volatility and average returns of 96.19%.

Crazy cartoon chickens and ears of corn help you to build multipliers and can extend the reels with extra wilds. There’s also a free spins bonus feature where wilds remain active for several rounds, making it easier to feather your nest with big wins.

How to Play the Lucky Clucks Online Slot

If you enjoy cartoons, then you’ll love the animated characters featured across the reels of the Lucky Clucks slot. Crazy cows, silly sheep, and bug-eyed birds appear on a 3-4-4-4-3 symbol grid, within the walls of a traditional red barn. Colorful playing card symbols and lucky horseshoes also appear, along with a star wild symbol that can act as others to complete or improve wins, and a bonus symbol that trigger free spins.

There’s a lively soundtrack to match the cartoon style and all of the looks, sounds, and features are the same across PCs, iOS, Android, and Windows versions, so you can play without compromise on any device.

Lucky Clucks uses what Microgaming term an ‘Adjacent Pays’ system, where you win with 3, 4, or 5 examples of the same symbol on connected reels from either the left or right sides, and there are 576 different ways for them to line up. You can play for between 0.15 and 15.00 per spin and select wagers via a tap on the Poker chip symbol on the controls.

The same panel holds a circular arrows button that starts the reels spinning automatically, and the double arrows that speed them up. The 3 lines button opens a paytable, which lists how much each symbol is worth and how the ingenious bonus features, such as the expanding reels, work. You win up to 0.73x your total wager from animal symbols across all 5 reels.

Chickens can appear above the game, with a mother hen always sitting on her nest at the top of the middle reel. Whenever chicken symbols land on the reels, they contribute to a Big Buildup feature, where chickens lay eggs above, and they add multipliers, wild symbols, or award a Mother Hen prize.

The Lucky Clucks slot machine also has a stand-alone free spins bonus feature, which triggers with 3, 4, or 5 bonus scatter symbols landing at once. Depending on how many scatters appear, you get 5, 7, or 9 bonus games, and during these, at least 1 chicken will feature in each spin, to expand the reels. Wilds also remain active for several free games, as they move one row down on each spin.

With a big enough multiplier, the Mother Hen prize can hit 3,000x your total wager, or 45,000.00 at the highest stake of 15.00. That’s quite low, and Microgaming are clearly looking to attract casual players to this game, rather than experienced gamblers looking for huge wins.

It’s a high volatility slot, so tends to pay out less often than lower variance games, although prize values can be high ratios of the stake to compensate. There’s a long-term payback percentage of 96.19%, which is also on the low side for a highly volatile slot.

The cartoon style and often hilarious animations ensure that the Lucky Clucks slot is great fun to play across desktop and mobile platforms. Expanding reels, multipliers, and Mother Hen jackpots are unusual features, and perhaps at odds with the low staking options that are aimed at less experienced players.

But if you don’t mind playing for 15.00 or less, and the 45,000.00 maximum isn’t an issue, then it’s a hugely enjoyable slot with lots of entertaining gameplay and features. Crack open the Lucky Clucks slot machine at the best Pennsylvania and the best New Jersey slots sites and be sure to claim their welcome bonus deals when you join.

What is the Mother Hen feature of the Lucky Clucks slot machine?

A hen sits at the top of the middle reel of the Lucky Clucks slot. Chickens can appear above other reels, and they add multipliers to a jackpot value under the Mother Hen. A Big Buildup feature can award her prize, which can reach 3,000x your wager.

Does the Lucky Clucks online slot have a free spins round?

Any 3, 4, or 5 bonus scatter symbols will trigger 5, 7, or 9 free spins respectively. At least one chicken appears in each game, to add multipliers, or expand the reels with wild symbols. Wilds drop down one row in each free game.

What is the minimum wager on the Lucky Clucks slot?

The minimum stake on each spin of the Lucky Clucks online slot is 0.15 and you can raise this to a maximum of 15.00, with several levels in between. It’s quite a limited wagering range, which might not suit higher stakes players.

How many paylines does the Lucky Clucks slot have?

Instead of fixed paylines, the Lucky Clucks slot uses an Adjacent Pays mechanism, where you win from 3 or more matched symbol on any 3 connected reels. There are 576 different ways to line them up for a win.

What is the RTP of the Lucky Clucks online slot?

The RTP (Return To Players) percentage of the Lucky Clucks slot machine is 96.19%. Over the long term, for every 100.00 placed in wagers, it pays back 96.19, but this will vary over the shorter term, and you are unlikely to hit this exactly.

Can I play the Lucky Clucks slot machine on a mobile?

You can enjoy the Lucky Clucks slot on an iPhone, iPad, Android, or Windows-powered device at our recommended mobile casinos. Some of the controls are moved for ease of use, but this aside, it’s the same as the desktop game.

What symbols feature in the Lucky Clucks slot?

The Lucky Clucks slot has a farmyard theme and cartoon style. You’ll see cows, sheep and various chickens on the reels, along with horseshoes, playing card symbols, wilds, and bonus scatter icons.

Are there any games similar to the Lucky Clucks slot?

There’s more cartoon farm animals in popular games such as The Great Chicken Escape slot from Pragmatic Play and Piggy Bank Farm by Play’n GO. You can enjoy these and more at our recommended casinos.

The Lucky Clucks slot comes from Microgaming and Crazy Tooth Studios. It’s a successful partnership that has seen the release of games like Queen of the Crystal Rays, Banana Drop, 3 Devils Pinball, and The Incredible Balloon Machine.

When was the Lucky Clucks online slot released?