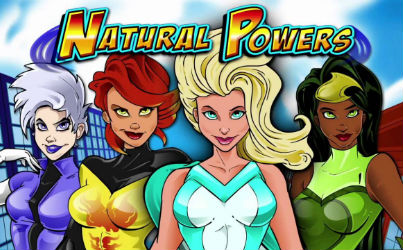 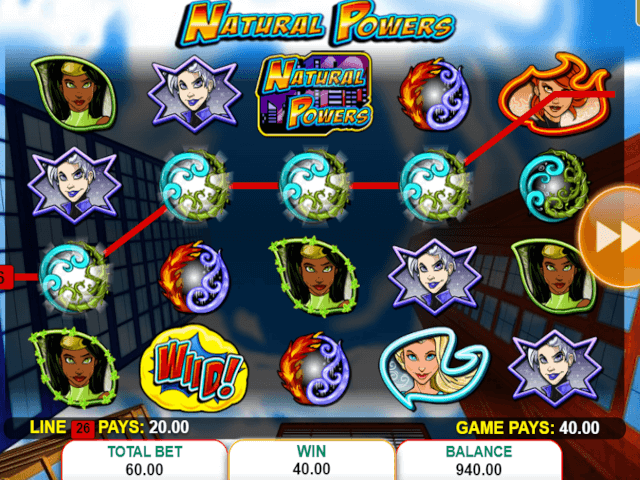 Although some slots are based on famous characters such as Superman and Wonder Woman, IGT have invented these girls specifically for the game. But the slot has been superbly designed and has some fun animations to make it even more entertaining.

The special features are pretty entertaining as well. Winning combinations of symbols will vanish to give you the chance of further wins, there’s a wild symbol that helps to complete extra lines and it comes with a free spins game with prize multipliers. On top of this, any of the superheroes can randomly use their powers at the end of a spin, giving you yet another chance to claim prizes.

All of the super features have helped Natural Powers to become one of the top slots in the IGT range. There’s the potential to win a prize of 40,000 coins, or 400,000.00 at the maximum stakes, so let’s put on our best superhero outfit and meet the Natural Powers team.

Setting Up The Natural Powers Slot

Natural Powers is a 5-reel, 40-payline slot where you win prizes by landing 3 or more of the same symbol across a line from the left side. Because there are so many features, instead of staking 1 coin per line, which is the usual format, you actually play the 40 lines with 60 coins. An easy to use control panel let’s you adjust the value of a coin from 0.01 to 10.00, with lots of options in between.

You can spin the reels for up to 50 times in Auto mode and there is also the option to play a superhero-type soundtrack or mute it. We quite liked the music as it fits in perfectly with the cartoon style, but the choice is yours. IGT designed Natural Powers to work just as well on Android and iOS mobiles as it does on a desktop PC or laptop, so wherever you are, you can join these supergirls in their adventures.

Be sure to take a look at the paytable before playing. Natural Powers is as action-packed as any superhero story and it’s best to see what each symbol pays out and how the multiple bonus rounds work. Just click the Paytable button below the reels to open it up.

The towers of a fictional city rise up behind the reels of Natural Powers. The symbols are clear, bright and great to look at, although just 7 main symbols are used. One is the high-paying game logo, 4 of these are the Earth, Wind, Fire and Water characters and the other 2 are lower value emblems representing 2 elements each. There is also a wild symbol that acts as others if needed.

As soon as you land a winning combination, POW!, you’ll unlock the Freefall Symbols feature. Any symbols that were part of the win will vanish and those above drop down to fill the gaps. If this makes a new win, these symbols also disappear, and so on until no new wins are seen.

After any random spin, or Freefall, ZAP!, a Mystery Feature can be awarded. Wind blows any Fire and Ice symbols off the reels, while Fire blows Earth and Wind symbols away. Earth removes a random pattern of symbols and Ice freezes symbols. Each of these can easily lead to new wins appearing.

If the whole Natural Powers team appear together, then SHAZAM!, a free spins round is triggered. Any 3 or these bonus symbols in view at once will automatically trigger the free games as well. Before they begin, you get to pick how many spins play out, along with any multipliers that will be applied to wins during them. The options range from 15 free games where wins are multiplied by between 2x and 4x, to just 5 spins, but any wins get boosted by between 8x and 10x over.

Our Verdict and an Alternative Game

We loved the Natural Powers slot machine. It looks good and will appeal to anyone who likes the superhero genre. But even if you don’t care much for the style, the bonus features are amazing, and you should still take a look.

It’s a game that appeals to anyone happy to stake at least 0.60 per spin and the maximum of 600.00 should suit high rollers. A low volatility equals regular prizes and a return to players percentage of 96.47% is very generous. Natural Powers has been a big hit at some of our best-rated online and mobile casinos, so register at a recommended site and be sure to any collect special bonuses on offer.

If you want to spin the reels of a slot based on a well-known hero, then Superman: The Movie is one of the biggest games around. This Playtech slot has photo images of the cast from the classic 1978 film, who land over 5 reels and 100 paylines. Features such as win multipliers, free spins and locked wild symbols are just some of the bonuses that have made the Superman: The Movie slot such a super-hit.