Ned and His Friends Online Slot 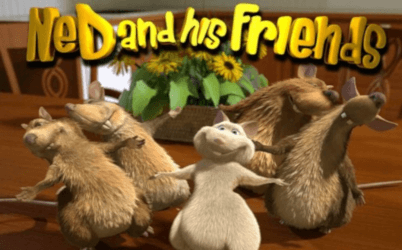 Game Provider: Betsoft
Play Ned and his Friends For Free!
Bookmark It For Later 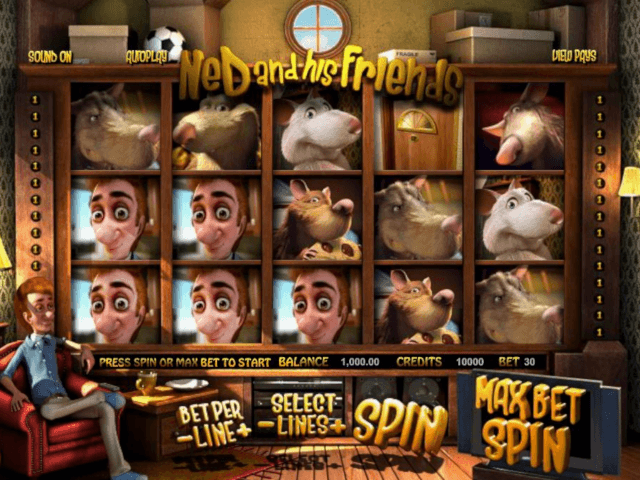 With the help of some happy little rodents, you may win up to 75,000 coins per round while playing for real cash, but only as long as you play on a Flash-enabled device.

Featuring the 3D characters and cinematic presentation that Betsoft is known for, Ned and His Friends can be really fun to play. What's better than its looks or animated symbols is the list of bonus features, which includes both click-me cash games as well as some amusing free spins rounds.

How to play Ned and His Friends Online Slot

Ned and His Friends comes with a crystal-clear display that's neatly organized and equipped with intuitive controls. Even if you're a first-time slot player, this game shouldn't be that hard to play. Begin on your far left to choose your preferred coin size and then move on to the "bet per line" and payline controls to set up your stake. Turn everything down to a minimum to play for only 0.01 credits per round or push all the controls upwards to play with a max bet of 150 credits.

The main characteristic that sets this slot apart from many other online slot machines is that it has active paylines. Thanks to this feature, you can pre-select which paylines you want to pay for in order to lower/increase your stake. You'll find all the paylines outlined inside the game's paytable where you'll also see all the symbols and their payouts. The prizes are always shown in coins and they can be won with seven picture symbols, some of which even pay when you collect only two of them in a sequence. When you play for real cash with the lowest bet per line, the payouts range from five to 500 coins. If you stake five credits per line, you'll see the prizes increase up to a max of 2,500 coins per sequence.

Ned and His Friends by Betsoft is also available for mobile playing, but only on mobile devices that support Adobe Flash. Sadly, this game wasn't repackaged by Betsoft in a To Go version but can be mostly played on desktop computers and laptops.

Ned and His Friends Features and Free Spins

Prizes at Ned's apartment are given for any sequences of two, three, or more matching symbols that are collected on an active payline, in a left-to-right direction. To get the biggest payouts while playing with real money, you'll need to collect some of the Ned symbols. These icons can pay up to 2,500 coins for a five-of-a-kind win and they can also pay for two matched symbols, along with three other rat icons.

Being a Betsoft slot game, Ned and His Friends also features some cinematic bonuses you can win by collecting special symbols. Get three of the mouse hole symbols in any position to trigger a click-me feature where you'll pick a rat tail to win yourself an instant prize. Get three girlfriend symbols, on the other hand, and you'll jump straight to the main bonus where you'll choose the rats that sing to Ned's girlfriend. You can collect prizes with each pick you make until she finally wakes up and the rats run away.

Another very amusing and rewarding feature is the free spins bonus. This bonus is triggered by three black rat/white rat symbols and it always gives a random number of free spins. If you activate it, you'll see the rats walk out to the middle of the apartment floor to start singing and dancing as the free spins play out in the background. Get the same combination of symbols again during the feature and you can re-trigger your bonus.

Ned and His Friends Maximum Win, RTP and Volatility

Betsoft makes most of its slot machines to attract a broad range of players and Ned and His Friends is a good example of this "motto". The game's variance is medium and it also comes with multiple bonuses, a diverse selection of bets to play with, and prizes that can attract all. With real money payouts going up to 75,000 coins per round and a gameplay that is exceptionally fun, Ned and His Friends will speak to anyone who likes engaging, balanced, and profitable slots. It will particularly appeal to players who like less volatile slots since the hit ratio is quite high, producing payouts very often while you play.

Ned and His Friends Verdict and Similar Online Slots

If you don't mind playing more volatile games for a shot at more profits, you also have plenty of other high-variance slots online that you may find more attractive. Try out Play N' Go's Book of Dead slot for a notoriously volatile game with bigger prizes, or check out Betsoft's Great 88 and Stampede slot machines for games that can pay way more, close to 1,000,000 credits per round. Pay a visit to some of the top-rated online casinos on our website to find even more high-volatility games but also claim an exciting welcome that's available to newly registered players.