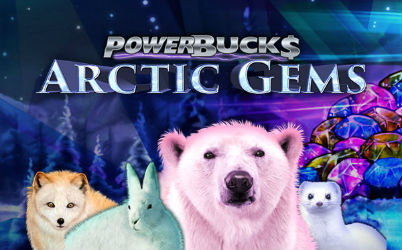 If you like wildlife-themed slots, then the cute critters that populate the reels of Arctic Gems will certainly appeal. This online slot comes from International Game Technology (IGT) and they have turned it into a hugely-popular game, not only because of the adorable animals, but also thanks to some equally adorable bonus features.

Win multipliers, symbol replacements, free spins and a unique Polar Picks round that can lead to progressive jackpots are just some of the extra rewards. The Powerbucks Arctic Gems online slots game is one of a series that are linked together, with a small portion of all bets put aside into a massive jackpot prize.

The reels of this winter wonderland can be spun for minimum stakes of 0.75, which might be a bit too much for low-limit gamblers, but the 150.00 maximum wager should be enough for most high rollers. If you want to get your hands on $1 million+, it’s worth noting that the chances of landing a jackpot goes up in line with the size of the bet.

You can play Powerbucks Arctic Gems at some of the top online casinos and enjoy the action on desktop PCs. Android and Apple-powered devices. Try it out in freeplay mode on this page or aim for some huge payouts when you play for cash.

This is a 5-reel slot, which has 50 paylines running from left to right across it. All lines are active, which means that all you need to decide is how much to stake in total. There are lots of options between the low and high limits and a click on the bet button reveals a list of all possible wagers. You always play with 75 coins and wins are calculated as the number of coins paid out for each combination.

IGT generally like to keep things nice and easy, which makes their games ideal for inexperienced players. However, the Powerbucks Arctic Gems online slots game has more features and bonus rounds than most, so you might want to review the paytable before you begin.

A tab above the reels opens the paytable up, where you can see how many coins are won when you land matching symbols across a line. There’s also details about how the features are triggered and what you need to do during each. The win multipliers and symbol replacements are great ways to grab extra rewards, but the Polar Picks round is the real highlight.

Whether you play online or on Apple and Android mobiles, all the style, features and betting options are the same. As more players can access the Powerbucks Arctic Gems slot, the amount set aside for the jackpot goes up as well, and it’s the vast potential prize that attracts even more people to the game. It’s a win-win for IGT and any lucky individual who manages to scoop the progressive prize.

The graphics in this game are outstanding. IGT have crafted a slot that looks great on any device, with a beautifully designed image of a wolf in a frozen landscape sitting next to the snow-covered reels. The colorful Northern Lights twinkle in the night sky and a haunting soundtrack adds another dimension to the gameplay.

The symbols are in two main groups, with Native American patterns paying smaller prizes, and bigger wins coming from animals like the Polecat, White Rabbit, Arctic Fox and Polar Bear. The bear pays up to 550 coins, but look out for jeweled multiplier symbols that be overlaid on an animal symbol. If the animal then becomes part of a winning combination, the payout is boosted by 2x, 3x, or 5x, depending on which gem was seen.

Howling wolves are a wild symbol that acts as others if it then completes a win for you, and a free spins snowflake symbol triggers 8 bonus games when seen in any 3 or more places. During the free spins, the lower value symbols are removed, so it’s easier to land the animal symbols across the game for some big payouts.

In any spin, it’s possible for random symbols to transform into multiple examples of an animal, and while this isn’t guaranteed to create a winning sequence, in practice, it often will. The main feature, however, is the Polar Picks round, which is awarded at random in any spin where a gem multiplier is seen.

The Verdict and a Similar Slot to Play

If you are happy to stake at least 0.75 per spin, and realize that the maximum jackpot is only claimed at higher stakes, then you should enjoy the many features and stunning images in the Powerbucks Arctic Gems slot machine.

The Northern wildlife theme is very popular, and you will find lots of other games that are filled with some of the creatures that live in these frozen worlds. In fact, one of the best comes from the same developer. Siberian Storm is another game where the reels are encased in snow and set against a chilly backdrop. A White Tiger is the star of this 5-reel game that uses the MultiWays Xtra system to give you 720 different ways to line up symbols.

See what chills these slots can give you when you play them at some of the best-rated top New Jersey slots sites or top Pennsylvania slots sites. The ones that we recommend will welcome you with lavish bonuses when you join up.