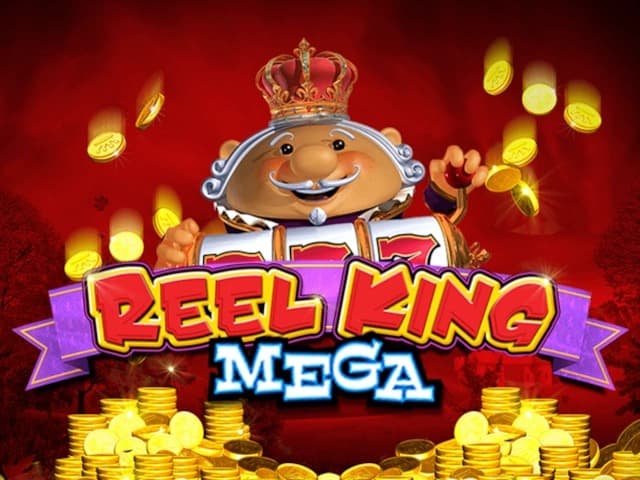 Reel King Mega is part of a hugely successful range of games themed around the same royal character. It’s s 5-reel, 20-line desktop and mobile slot from Red Tiger, filled with playing card symbols, cherries, and bags of gold. Wild symbols help out in the main games, and the King pops up at random to award guaranteed wins on mini 3-reel games.

Help the King to find his crown, as it bounces around the reels turning random symbols into extra wilds. Reel King Mega has a low volatility, but higher than average returns of 96.17%, which make it outstanding value for your money. Line the ideal combination of symbols across the game to win up to 500x your wager at the best New Jersey and Pennsylvania online casinos!

How to Play the Reel King Mega Slots Game

In common with the rest of the range, the Reel King Mega online slot has fairly basic graphics that keep it looking like an old-style fruit machine. Cherries, plums, and bags of gold feature here, along with the card emblems 10 through to K, and a wild jester hat. A red-tinted scene of lakes, tress, and mountains sits behind the 5x3 symbol grid and a pile of gold coins below hints at the potential to win prizes from the King.

Reel King Mega uses the standard Red Tiger controls, which are nice and easy to understand across PCs, iOS, Android, and Windows mobile platforms on all the top New Jersey and Pennsylvania slots sites. The Stake button reveals a generous spread of wager options from 0.20 to 200.00 for each spin. The Auto tab spins the reels for up to 100 times, but you’ll need to set a loss limit first.

Click the Pays button and you see how much each symbol is worth when it crosses any of the 20 lines from left to right. The bag of gold pays 5x, 10x, and 25x your wager for 3, 4, or 5 on a payline.

The wild jester hat isn’t worth anything on its own, but has the power to act as others if it can then complete wins. Occasionally, a crown appears, and it moves around the Reel King Mega symbol grid transforming standard symbols into extra wilds. It makes it easier to get a winning combination, although it won’t always help.

The main bonus feature is another random event. The reels turn gold and up to five examples of the cheerful Reel King jump into the grid, each with a 3-reel slot for a body. Colorful 7s feature on the reels and they spin for a guaranteed win.

The mini games continue to spin for as long as you land winning 7s, and with a little luck, each King will award several prizes in a row before they vanish. Payouts vary from 2x your wager for a mix of red, blue, and yellow 7s, to 25x for a full set of red 7 symbols.

An exciting Gamble option lets you spin a dial and boost the win if it stops in a green section. If the dial lands on red, you lose the prize.

The maximum win from the Reel King Mega slot is 500x your wager, or 100,000.00 at the highest stake of 200.00. That’s quite low, but this is a low volatility game that has a tendency to pay smaller prizes, but more consistently than higher-variance games.

The average payback percentage of 96.17% is better than most low volatility slot games. You can play the Reel King mega slot machine for longer, with less risk to your bankroll.

The straightforward graphics, and jolly King character, are the same across the Reel King range. It looks bright and cheerful on desktop and mobile platforms, and there’s a classic fruit machine soundtrack to go along with it.

The low volatility won’t suit everyone, and it’s not a game that offers exceptionally high payouts, but if you want plenty of smaller wins, then it’s ideal.

The random bonus features add plenty of excitement to the gameplay, and you never know if the crown or King are going to leap into action at any time. Guaranteed wins from the King are the highlight, and the mini reels can often spin several times before a non-winning round.

Play the Reel King Mega slot machine at the best Red Tiger sites and see if you can scoop some royal rewards while taking advantage of the best welcome bonus offers.

Which is the best casino to play the Reel King Mega slot?

We have full guides to the best online casinos where you can play the Reel King Mega slots game. These sites also feature games from other top developers, plus fantastic bonus deals, secure deposit and withdrawal facilities, and unrivalled customer service.

What is the mini-game feature of the Reel King Mega slot machine?

The Reel King himself can appear at random, and he has a 3-reel slot for a body. These reels feature red, blue, and yellow 7s symbols which spin over and over until a non-winning combination appears. Wins are guaranteed from this fun and rewarding feature.

Does the Reel King Mega slot have a good range of wagering options?

You can play the Reel King Mega slot for as little as 0.10 per spin to as much as 200.00, which gives you an excellent spread of options. It’s an easy game to play, and you simply click the ‘Stake’ button, then select a level to suit your budget.

Can I play the Reel King Mega slots game on my mobile device?

You can play the Reel King Mega slots game on Android, Windows, and iOS-powered phones and tablet computers. All of the features are the same as you find in the desktop game, so you enjoy this game from wherever you have a mobile connection.

How volatile is the Reel King Mega slot?

This is a low volatility game, which pays out quite often, but prizes are usually quite low when compared to higher volatility slots. The Reel King Mega slot machine is ideal for anyone who likes lots of steady wins.

How many paylines does the Reel King Mega slot have?

The Reel King Mega slot machine is a 20-line game. In the base games, you win by matching 3 or more symbols across a line from the left side, but in the bonus round, single-line slots come into play, thanks to the generous King.

Is the Reel King Mega slot a popular game?

The Reel King Mega slot is a hugely popular game. It’s part of a whole range that features the same character, and each has its own special features. The easy gameplay and fun bonuses have ensured that Reel King Mega is among the most successful in the series.

What other games are in the Reel King Mega slot series?

Other games that you can play alongside the Reel King Mega slot include Reel King Megaways, where you have up to 117,649 different ways to line symbols up for a win. The original Reel King online slot remains just as popular as it ever was.

Reel King Mega comes from Red Tiger. This popular developer has an impressive range of high quality games at our favorite casinos, with slots such as Gonzo’s Quest Megaways, Dragon’s Luck, and 777 Strike in their collection.

When was the Reel King Mega slot machine released?