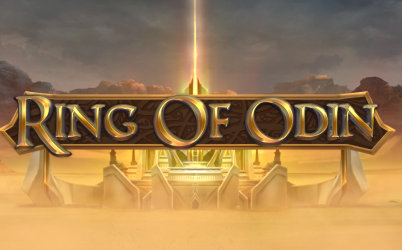 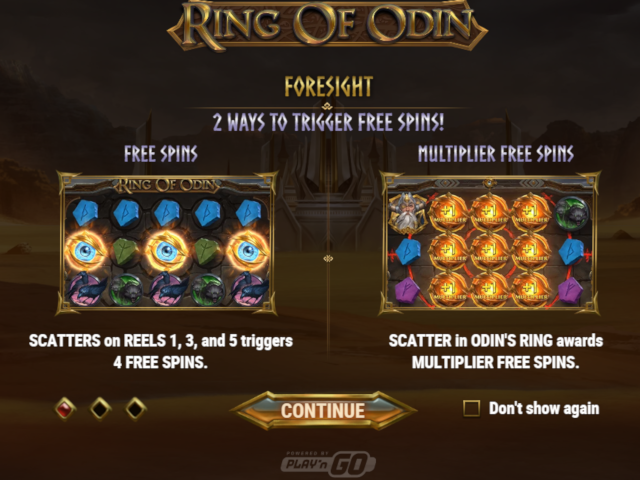 A Look At Ring of Odin Online Slot

The mythological Norse and Germanic sovereign Odin and the Kingdom of Asgard share the spotlight in the new Ring of Odin online slot powered by Play'n Go. The Ring of Odin is 5-reel slot machine with 10 paylines. The theme of this game is focused Odin’s mystical and powerful ring Draupnir. Forged by elves, this ring has the power to multiply itself into nine rings every ninth night. Odin’s character deals with the world of death, healing, wisdom and royalty. This game mixes spectacular visuals with a fun experience for the novice and skilled player alike. The medium-variance Ring of Odin game has an RTP rate of 96.27%.

Similar to other Play'n Go games, the Ring of Odin online slot is built for the mobile player and can be played on any Android or iOS device. The many bonus bonus features will give you even more rewards. Among the symbols, players will find ravens, hounds, horses and several rune stones, in addition to Odin himself. The game area is guarded by stone statues on each side. The overall design carries a gloomier feel given Odin’s characteristic. The visuals are vibrant and strong. You can play the Ring of Odin online slot machine or try a free demo to get a test out its various features.

How to Play Ring of Odin Online Slot

If you like top slots that offer the experienced player a chance to win on many different levels, the Ring of Odin online slot is for you. The line wagers range from $0.10 all the way up to $100. Ring of Odin delivers a top jackpot of 5,000x the line wager, which would mean a top potential payout of $500,000.

Odin’s ring - Drupnir - uses its mighty powers to multiply into nine rings that fill the three middle reels of the screen. Players will be rewarded with a re-spin while the game triggers the Drupnir re-spins mode – up to 9 re-spins for each symbol. The previously chosen symbol from Odin’s Ring grows into one Mega Symbol. These sticky Mega Symbols remain in the central section until the re-spins finish.

For players who like to gambling on their smartphone, the Ring of Odin slot machine from Play'n Go is available in a smartphone version that works flawlessly with nearly any iOS or Android device and carries the same automatic controls. Players can use regular spin button to wager manually or engage the Auto Play mode to take a break from tapping the screen.

The Ring of Odin online slot features standard and multiplier free spins, wild symbols, bonuses and the thrilling Draupnir respin. The wild spin feature offers players an additional chance to create a winning combo. The strength of this feature from the fact that it adapts to the symbols which are found on the same lines as it is, and it can be part of several types of combinations at the same time.

This game has some solid bonus features, much like the Annihilator online slot. Odin’s Ring - Drupnir - is a random bonus feature, which can be triggered at any point as you’re playing this game. It will have an area, in which symbols that land become chosen. For the next respin, these rings will be present in the game area with the hope that the chosen icon lands in one of them. If it happens, then Draupnir respins are activated, with a maximum of 9 possible. The feature triggers cover the reels 2, 3 and 4.

Here, players can benefit from a generous winning multiplier worth up to 9x their stake. Extra free spins are available for players during this bonus game with every extra scatter symbol. Lastly, the Ring of Odin online slot from Play'n Go is includes another bonus mode called Foresight Free Spins feature will be triggered when players land on a minimum of three scattered Odin’s Eye symbols - located on reels 1, 3 and 3 - on the same spin. Players will then earn 4 free spins once they reach this level.

Click here: to play real money slots at BetAmerica Casino and get a 25% deposit bonus up to $500.

The RTP of the Ring of Odin online slot from Play'n Go is 96.2% and the maximum possible payout could be 5,000 x times of your stake. The medium-variance game comes in with the free spins feature which if activated will get you up to a 9x multiplier.

Players seeking the best New Jersey online casinos or the top Pennsylvania online slots won’t do much better than Ring of Odin. Mythology is a very popular subject for Play’n Go and Ring of Odin joins the long line of inspirational games. There are plenty of stories to be told. This game ranks among the best offerings by the producer, given its multitude of features. Whether you’re on a big or small budget, Ring of Odin will deliver an experience that is worth the journey. The game gives you some very attractive free spins games with the added benefit of expanding symbols and non-adjacent payouts.

Ring of Odin joins several other successful Play’n Go titles built upon this similar theme. Viking Runecraft is another interesting choice for players who prefer a medium- variance slot and one that takes you into the world of Norse mythology. For even more great slot machines from this studio and some tempting welcome bonuses, feel free to visit any of our reviewed Play'n Go casinos!