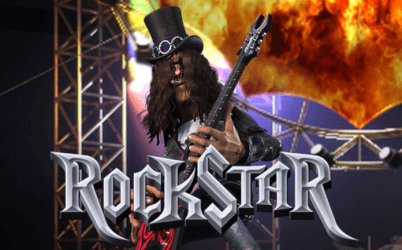 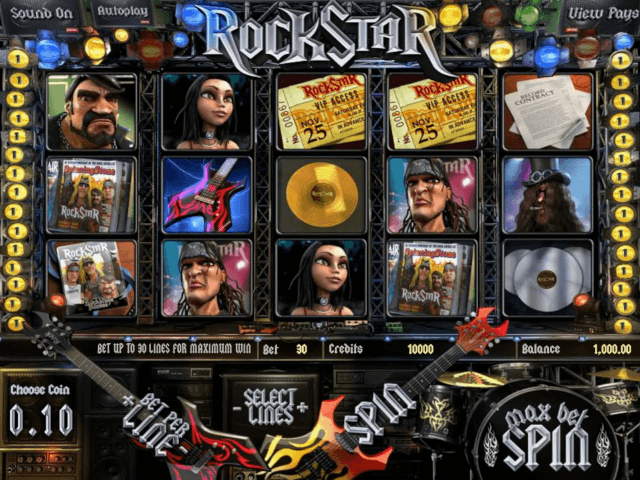 Featuring that well-known 3D look and animated bonuses of a Betsoft slot machine, Rock Star will give you a realistic taste of the thrills and riches that come with being in a popular rock band, but only on devices that support Flash. Offering you 30 active paylines and thematic features that'll let you earn more without investing more, this slot is capable of paying up to 150,000 coins per round when you play through a real money casino!

Rock Star is exceptionally fun to enjoy, not only because of its unique presentation but also because of the bonuses built into it. Starting with wilds that multiply prizes and continuing with cinematic bonuses where you'll shred solos and perform live to win some instant payouts, this slot gives you plenty of fun ways to earn something.

Even if you're quite new to playing slots, enjoying Rock Star shouldn't be hard because the game comes equipped with a full range of on-screen controls. Before you start the rock show and begin spinning away, first use the three leftmost controls to select your coin value, number of paylines you want to pay for, but also the size of your bet per line. You have an option to play with a really wide range of bets, from a minimum of 0.01 credits to a max bet of 150 credits per round.

Once you start playing for real money, it would be up to nine picture symbols to trigger your payouts. You can see all the available symbols inside the paytable where every other feature of the game is explained in more length. All of the icons in the slot pay prizes in coins which can vary according to your bet per line. So if you play with only one coin per line, the payouts will start at two coins for a three-symbol sequence and go up to a maximum of 100 coins for a five-of-a-kind. If you bet more money and play with the maximum bet per line (five), those prizes will look much better, ranging between 10 and 500 coins per sequence. Even if these prizes feel small, remember that the slot also has some profitable multiplier symbols you can collect, which will give you a unique chance to boost those payouts up to several times.

If you like playing on a tablet or a smartphone, you won't be able to use this slot machine unless your mobile device supports Flash. Unlike many older Betsoft games, Rock Star wasn't redesigned in a To Go version, as it can mostly be played on desktop computers or laptops.

Earning money in the Rock Star slot is not only possible by playing guitar but also by collecting matching symbols. The slot will pay you for each sequence of three or more identical symbols you collect on a payline, beginning with the first reel on the left. The best symbols to collect are the rock stars, starting with the singer who can pay up to 500 coins per sequence and continuing with the guitarist, bassist, and drummer, all of which can pay up to 400 coins.

To earn more while you play for real money, look for some of the bonus symbols. For starters, you have two wild symbols in the game that look like gold and platinum records which can substitute for all base symbols and multiply your prizes. Collect a win with either of the symbols and get your payouts multiplied by 2x-5x or combine both wilds together to boost your prizes up to 10x! There's also the guitar symbol, three or more of which on an active payline can unlock a bonus feature where you'll get to play epic solos and collect instant cash prizes along the way.

Last but not least, you have the special ticket symbol. Get three or more of the symbols on an active payline and you can win access to the main bonus round. This bonus is a cinematic feature where you'll play songs just like in Guitar Hero, winning prizes for each correct note you hit.

Rock Star is a very fun slot, one that you can easily play for hours thanks to its immersive presentation and medium-variance gameplay. If you like slots that can pay balanced returns or casual games that you can play throughout long sessions, spending only a penny per round, you'll find Rock Star up for the task. Not only does it have really wide betting limits but the game also features quite profitable extras, ones that could end up getting you up to 150,000 coins per spin. The hit ratio is certainly high enough to give you plenty of prizes, although not as often as a low-variance game would.

If you'd rather play something with a different volatility, you have other slots from the software studio that you may find more alluring. For something more challenging with much better prizes, you can try Betsoft's high-variance Stampede slot which offers you 1,024 ways to win and a jackpot of 769,500 credits. At the other end of the spectrum you have the SugarPop slot, which instead offers you a Candy Crush-inspired low-variance gameplay with regular payouts and prizes up to 25,000 coins. For more slots from Betsoft and other popular game providers, make sure to browse around some of our top online casinos where you can pick up a nice welcome bonus if you're a new player.