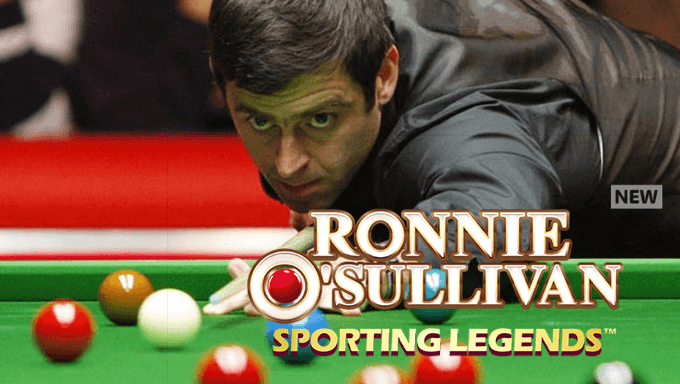 Ronnie O’Sullivan’s Sporting Legends is a unique take on a traditional slot, blending snooker-driven thematic visuals with classic gameplay in a solid bid to blur the lines between the felt table and the casino floor.

Of course the game has a snooker theme. With an adoring crowd packed into the backdrop, each reel is splayed vertically along a green snooker table. While the slot does not feature 3D graphics it maintains a clean and slick visual presence - undistracting from the exciting action afforded to players with each spin.

The game is a 5 reel, 25 payline jackpot slot. It retains everything great about progressive slots, while including some awesome new additions - such as the 147 Maximum Break Free Games feature where you can cue up free spins with multipliers right up to 7x.

Ronnie O’Sullivan Sporting legends can be played from £0.25 to £50 per spin on mobile and desktop. Free gameplay is also on offer, providing snooker and slot fans with the ability to play and understand the game at different coin levels before putting up their own money.

Symbols on the reels in-game include A to 10 cards with coloured snooker balls on them. Also include are black and white balls, racked red balls, chalk and two images of Ronnie - one in action and one posing. The posing Ronnie is the one you want to see - getting 3, 4 or 5 of these will give you 5, 20 or 100 times your stake respectively, something to keep in mind as a part of your slots strategy.

The Championship bonus symbol will trigger if it lands on reels 1 and 5 sending you into a tournament phase of the slot. From this point you pick from 5 balls which give you cash prizes. Here you can also reveal ‘Win All’ which gives you all prizes or ‘Collect’ which finishes the feature. If you decide to go for a cash prize or ’Win All’ you move to the next round where more prizes are available. There are 5 rounds to play meaning there’s plenty to win if you hit a lucky streak.

As a part of this slot, and others in the Sporting Legends series, there are Daily, Weekly and Mega Sporting jackpots available to win. These are triggered randomly on any spin. A unique feature included by Playtech is the timeframe which is displayed at the top of the slot. The Daily and Weekly jackpots have to be won within their respective time frames however the Mega Jackpot can continue to grow (and is the biggest jackpot of the three). If you’d like to see other slots included in Playtech’s rapidly expanding portfolio, check them out here.