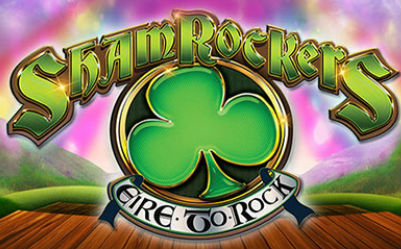 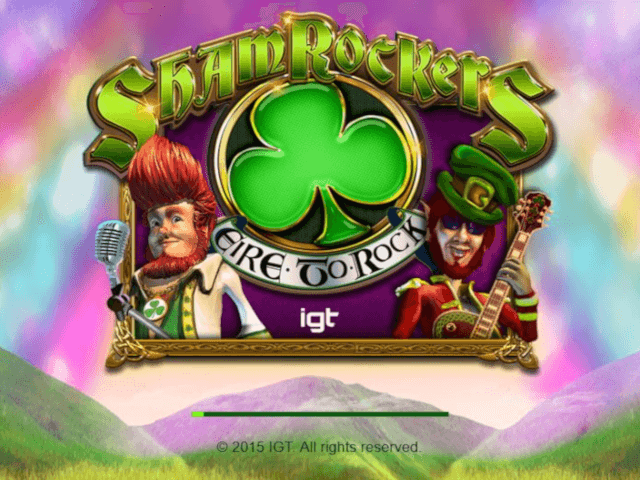 Slots themed around Irish culture are hugely popular, but International Game Technology (IGT) have taken a whole new approach with their Shamrockers Eire to Rock online slot. Instead of rainbows, pots of gold and pints of dark beer, this game features a band of leprechauns playing traditional Irish music. The style is a refreshing change and has helped Shamrockers Eire to Rock to become one of the top online video slots in the whole IGT range.

The fact that you can play this game on a desktop computer, Android or iOS-powered mobile device is music to our ears, and it looks great on all platforms. The features could have you dancing a jig, as a lucky clover wild symbol helps to complete combinations, symbols appear stacked and there’s a free spins round with richer reels. A unique Encore feature adds even more bonus games to the total.

Wins of up to 625x your stake, or 250,000.00 at the maximum bet, are waiting to be claimed. So, get ready to party Irish-style with the leaping leprechauns of Shamrockers Eire to Rock, in freeplay mode here, or for real cash at some of the best online casinos.

Setting up Shamrockers Eire to Rock

This is a 5-reel, 20-payline slot, where all lines are permanently active. You win multiples of the line stake when 3, 4, or 5 matching symbols land across a payline from the left side. It’s a classic format that makes this game easy for inexperienced players to learn, and familiar to more seasoned punters.

You can spin these reels from as little as 0.20, right up to the high limit of 400.00, with lots of options in between, so it’s a game for all budgets. The Shamrockers give you a warm Irish welcome, with a high return to player percentage of 96.20%.

If you open up the paytable, via a button at the bottom of the reels, you will see how much each symbol is worth and how the bonuses play out. Playing card icons in a Celtic style are the lower value, but more frequently seen symbols. The 4 Shamrockers pay out higher prizes, with 15, 60, or 500x your line bet to collect when the lead vocalist lands on 3, 4, or all 5 reels across a payline.

All the control options and features, including the free games and Encore round, are common across desktop PCs and mobiles. It’s this cross-platform flexibility that has opened the Shamrockers Eire to Rock slots game up to such a wide audience.

Although we said there were no rainbows in this game, there is still a multi-colored sky in view behind the reels. No Irish-themed slot could be without at least a hint of a rainbow. A decorative gold frame borders the reels, helping to turn the Shamrockers Eire to Rock online slot into a great-looking game.

The cartoon-style characters have been expertly designed, with slight 3D effects and nice animations added. They each do a little dance when becoming part of a winning combination, accompanied by a lively tune.

Shamrockers Eire to Rock comes with IGT’s Dynamic Stacks feature. A random symbol is selected before each spin to be stacked several high on the reels, boosting the odds that it will create a win for you.

A lucky four-leaf clover is the wild symbol which can act as all others, apart from a ticket to the concert, which is a bonus scatter symbol. When this bonus symbol appears in 3 places anywhere on the middle reels, you get paid a prize equal to twice the stake, followed by 4 free spins.

Although 4 spins are fewer than in most games, the Shamrockers are guaranteed to appear as Dynamic Stacked symbols in the round. The fiddle player is stacked on the first spin, then it’s the turn of the female leprechaun drummer to be stacked. On the third free spin, you will see the guitarist stacked and finally, the lead singer, with his hair in a spectacular red quiff, is stacked.

If a golden ticket is seen in the last free spin, the special Encore feature retriggers the round, with the same Dynamic Stacked Shamrockers appearing. The ticket becomes an extra wild symbol for the Encore spins, although it only appears on reel 5, to the right side.

Our Verdict and a Similar Game

Anyone who like Irish-themed slots, (and let’s face it, that’s most of us), will love the Shamrockers Eire to Rock game. It’s filled with fun characters, entertaining animations and the Craic of a night out with a band of leprechauns.

Be aware that it’s a high-volatility game, so you might have to spin the reels a few times before collecting a win. But the pay-off is that the prizes tend to be relatively high in value, so it can pay to be patient.

Look out for the Leprechaun Legends slot from Genesis Gaming. This popular game features another band of musical characters playing traditional tunes. The 5 reels are crossed by 50 paylines and along with the band, you will once more see a lucky clover wild symbol and playing card icons.

Pots of Gold pay out instant cash awards of up to 10x the total bet, while the Luck O’ The Irish feature locks high-paying scatter symbols in place as the rest of the reels respin. In the free spins round, leprechauns can become locked wild symbols, leading you to your own pot of gold before the games end.

These hugely entertaining slots are both big successes at some of our top New Jersey slots sites or top Pennsylvania slots sites. Follow the rainbow, (or our links anyway), to the sites and see if you have some of that famous Irish good fortune when you play these games.