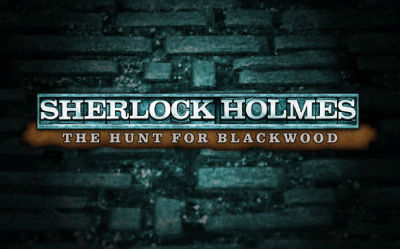 Game Provider: IGT
Play Sherlock Holmes: The Hunt for Blackwood For Free!
Bookmark It For Later 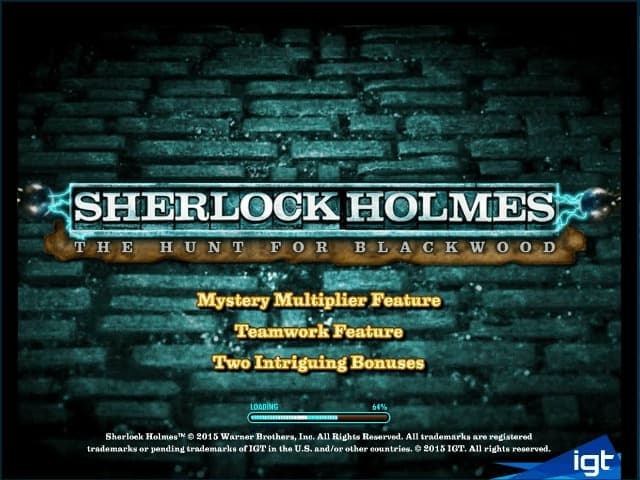 Help Holmes and Watson solve a dastardly case of murder and intrigue as you spin the reels of Sherlock Holmes: The Hunt for Blackwood slot from International Game Technology (IGT). This online and mobile compatible slot is based directly on the 2009 Sherlock Holmes movie and showcases members of the cast and events from the film.

It’s a 5-reel game that has 30 paylines and as you uncover the secrets within, special features such as multipliers, combined symbols, a prize-picking round and a unique bonus wheel are all waiting to be discovered.

The impressive features and fantastic design of the Sherlock Holmes: The Hunt for Blackwood online slot have made this game hugely successful. IGT have a number of slots based on famous films, TV shows and people, but almost all of them are confined to land-based casinos. But we’re pleased to see this one can be enjoyed online, on Android and iOS mobiles at some of the very best casinos.

We’re also very pleased to reveal that you can find wins of up to 50,000.00 when the perfect mix of symbols and multipliers appear. If you liked the hit movie, join Holmes and Watson on this adventure by heading over to a recommended site where you can crack the case to collect the top prizes.

Setting Up Sherlock Holmes: The Hunt for Blackwood

IGT have aimed the Sherlock Holmes: The Hunt for Blackwood slot at players who like lots of features. If you have never been near a slot machine before, there’s no need to worry as on-screen guides help you through each bonus round and in the base games, it works just like most other slots. You win by matching 3 or more identical symbols from left to right across any of the 30 paylines, collecting multiples of the per line stake.

How much you win depends on which symbol lands, with all images on the reels linked to the film. A curved pipe, magnifying glass, pocketwatch, violin and bulldog each pay up to 30x when filling a line. Higher value symbols are images of Inspector Lestrade, Watsons’ fiancée, Mary Morstan, Jude Law as Watson and of course, Robert Downey Jr as Holmes himself.

These last two each pay up to 100x the line stake. The game logo is a wild symbol, substituting for others to complete combinations and paying up to 500x the line bet when it crosses all 5 reels.

Click the Paytable button below the reels to discover the full breakdown of what you win with each combination, along with details of the numerous features, including that special bonus wheel.

You can stake as little as 0.60 or as much as 300.00 on each spin of the reels. Whether you play the Sherlock Holmes: The Hunt for Blackwood online slot on a desktop computer, laptop, Android or iOS device, all of the gameplay, features and betting options are the same.

Winning prizes as symbols line up across paylines is all well and good, but what we really want to do is trigger the vast number of extra features that make the Sherlock Holmes: The Hunt for Blackwood slot such an exciting game.

Some of these features will appear at random in any spin. The Mystery Multiplier simply boosts a win by between 2x and 10x. If Holmes and Watson symbols are seen in the same spin, they can combine into a joint symbol that pays up to 300x the line bet, which makes it easier to land a high-paying combination from this duo.

A bonus symbol takes you to Holmes’ room at 221b Baker Street. In this untidy environment, you will need to select objects to collect win multipliers, extra picks, entry to a free spins game, or a chance to spin the wheel in the Blackwood Wheel Bonus.

This wheel has 3 active pointers and you have 10 spins during which you need to evade the nefarious Blackwood, (played by Mark Strong in the movie.) Wedges on the wheel contain prizes, Blackwood, or Sherlock.

On the 4th and 8th spins, the wedges on the wheel change to higher-value prizes, but more Blackwood wedges are added, increasing the chances that he will end the round by deactivating wedges. If you land on a Sherlock section, all wedges are restored. Should you still have active pointers at the end of the 10 spins, all wins from the feature will be doubled in value.

It sounds a little complex, but trust us, once the Blackwood Wheel Bonus is triggered, you will be following the action quite easily.

The Verdict and a Similar Slot

This is a medium-volatility game that has an average return to players percentage of 94.82%. If you liked the films, then the Sherlock Holmes the Hunt for Blackwood online slot is one that you should definitely try out. The photo-images, film clips and stunning features all come together to make this one of the top games to have ever been released by IGT.

If you don’t like the movies, then try to ignore the graphics and just enjoy the gameplay. You will find the Sherlock Holmes the Hunt for Blackwood online video slot at some of the top New Jersey slots sites or top Pennsylvania slots sites. Check out our recommended casinos on this page, and don’t forget to collect welcome bonuses when you join up.

For a similar experience, try out the Sherlock Mystery slots game from Playtech. This uses cartoon characters instead of real actors, but has some almost identical features, such as Holmes and Watson as a high-paying joint symbol, as well as a prize-picking round.

Why should you play these games? It’s Elementary, my dear Reader. They are thrilling slots that will keep you entertained as you join the adventures of the most famous detective of all.