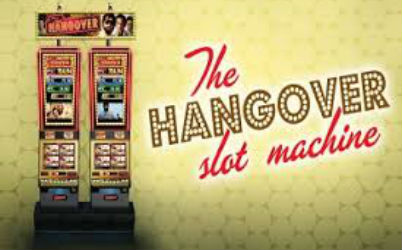 Game Provider: IGT
Play The Hangover For Free!
Bookmark It For Later
Demo Not Available, Use The Offer Below To
Play for Real Money Now!
Showing , United States
EDIT LOCATION
locale:
Loading...

Get ready, as the Wolfpack are back in a slot machine from IGT based on the hugely successful Hangover film series. It’s a game filled with images of the cast and events from the movies. The Hangover slots game also crams in plenty of bonus rounds, such as free spins and an interactive game where you pick teeth for prizes. The Hangover slot also comes with four progressive jackpots. We’ll drink to that!

While it’s a great slot machine, the real headache is that it’s only available at land-based casinos. You can’t play The Hangover online or on an Apple or Android mobile device. It’s quite literally a case of ‘what happens in Vegas, stays in Vegas.’

If you don’t happen to live on the Vegas strip, there are still a couple of similar games to play online and on mobiles. We’ve found slots based on other popular comedy movies for you to have a shot at.

Let’s take a closer look at The Hangover slot machine first, then we’ll come back to some of the best alternatives that are found at our favorite online casino sites.

Setting up The Hangover

IGT has used a standard gaming cabinet to house this slot machine. The reels are bright, clear and colorful while a big panel above them advertises the game, along with the progressive jackpot levels.

This is a five-reel slot, crossed by 30-paylines. All lines are active, and you just need to decide how much to wager on each line, with options ranging from just 0.01, which gives minimum stakes of 0.30 per spin. The maximum stake of 30.00 per spin could be a little too low for high rollers, but it’s fine for the vast majority of us.

Other control buttons launch an auto-play function and you can check out the paytable to see what each symbol pays out. This table also outlines the various bonus rounds, including how the progressive jackpots are triggered.

A simple user interface ensures that The Hangover slot will appeal to the broadest possible range of players, including casual visitors to the casino and gamblers looking for a feature-filled game.

Gameplay and Features of The Hangover

Unlike many slots which pad out the reels with standard playing card symbols, IGT have linked everything to the films. A chicken, the baby, a tiger and lots of drinks are seen, along with the main cast members.

Mr. Chow shouts out instructions in his manic voice, congratulating you on winning spins, or telling you how unlucky you are on losing spins. It adds a nice bit of humour to the gameplay, helped by lots of video clips taken directly from the best bits of the film. Many of these are set in casinos, cleverly linking the slot to the surroundings. Even Mike Tyson makes an appearance, delivering a knockout punch to Alan, and revealing that a series of knockout bonus features are available.

The Villa game gives players the chance to collect winnings as they pick from a range of objects on the screen. It’s a progressive round with guaranteed payouts that can include the jackpots when the right objects are found. In Stu’s Pick a Tooth feature, you select from blood-covered teeth to reveal any of five different prizes.

The 'Stun Gun' game is another feature linked directly to the films. Players click the trigger of a gun, and the more times it gets fired before the round ends, the more credits can be won. If the Mr Chow free spins are awarded, bonus games play out using different symbols that help to complete more winning combinations.

The Verdict and Online Alternatives

With a fun soundtrack, fast gameplay and so many extra features, it’s no wonder that The Hangover slots game has become so popular. But unless IGT release it online, which is very unlikely, most of use won’t be able to play it.

That’s where slots such as Bridesmaids and Ted come in. These movie-themed slots not only bring a bit of R-rated entertainment to your desktop PC’s, Android and Apple mobiles, but also come packed full of their own bonus features.

Bridesmaids is a Microgaming slot (although unusually, IGT actually have a version that’s restricted to land-based casino sites.) You join Lillian, Annie, Helen, Megan, Rita and Becca over five reels and 40 paylines, finding bonus rounds such as free spins with stacked symbols. Another free spins round sees winning symbols vanish and multipliers on any subsequent wins as new symbol replace them. Real images and scenes from the film have turned Bridesmaids into a huge hit for Microgaming.

Ted features everyone’s favorite foul-mouthed, pot-smoking magical cloth bear. The slot from Blueprint Gaming stitches together an hilarious film with a bonus-filled game. Beer, bongs and beautiful women are some of the high-value symbols, while Ted himself is wild, acting as others to create extra winning combinations for you.

The 'Thunder Buddies' bonus takes you up a ladder to any of five extra features. Psychedelic Super Spins, a Beer Shuffle, Lazer Gun Wilds and TV Streak can all be enjoyed at some of the best online and mobile casinos. Head over to our recommended slots to check out these games.