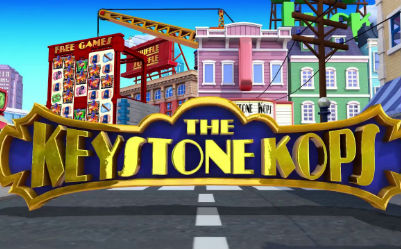 Game Provider: IGT
Play The Keystone Kops For Free!
Bookmark It For Later
Demo Not Available, Use The Offer Below To
Play for Real Money Now!
Showing , United States
EDIT LOCATION
locale:
Loading...

Check out an arresting game from International Game Technology (IGT) and enjoy the krazy kapers of the Keystone Kops online. This is a 5-reel, 30-payline game that uses high-end computer graphics to bring a cartoon adventure to life.

Randomly awarded mini features can turn any spin into a bonus game, while you will also discover 2 separate free spins rounds, symbol upgrades and even progressive jackpots. The multiple bonuses features and hilarious style have turned the Keystone Kops online video slot into one of the top games in the IGT range.

You can join in the fun on a desktop computer, iOS or Android mobiles at some of the top slots sites. Will the Keystone Kops slot machine lead you to hidden loot? Read our review to find out.

Join the Keystone Kops and help them out with their misadventures at online and mobile optimized casinos that feature the IGT range. You won’t have to do any detective work to find a site, as we’ve found a couple of link_text_goes_here or top Pennsylvania slots sites such as those featured on this page.