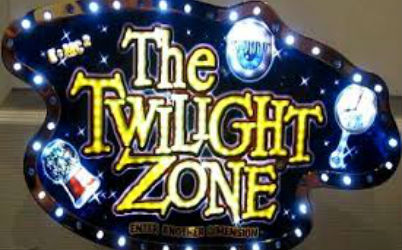 Game Provider: IGT
Play The Twilight Zone For Free!
Bookmark It For Later
Demo Not Available, Use The Offer Below To
Play for Real Money Now!
Showing , United States
EDIT LOCATION
locale:
Loading...

Casino Games developer IGT are the experts in delivering slots themed around famous movies, people and TV shows. The Twilight Zone slot machine is among their most successful, particularly in the USA, where the original TV series has a massive cult status. The Twilight Zone slot from IGT features lots of iconic images on the five reels, and plenty of gripping gameplay to keep you on the edge of your seat.

First aired in 1958, The Twilight Zone was created by Rod Serling. Through several reincarnations in the 1980s and 2000’s, it’s popularity continues. IGT have capitalized on this enduring success by launching The Twilight Zone slot machine into land-based casino across the globe.

Unfortunately, you won’t be able to enjoy this creepy slot online, on iOS, or Android mobile. It’s not the end of the world though, as we’ve found a similar haunting slot that’s found at some of the top casino sites online. We will take a closer look once we’ve delved into the mysteries of The Twilight slot machine from IGT.

Features of The Twilight Zone include prize-picking rounds, free spins and a progressive jackpot presented in 3D effect. If you are ready to enter The Twilight Zone, let’s head to what the opening quote of each episode described as ‘’a dimension as vast as space and as timeless as infinity.’’

Setting Up The Twilight Zone

The way that you set up The Twilight Zone slot is a little unusual. You can play 15 paylines winning when you match three or more symbols across a line, or choose a 243 ways to win format, where you only need symbol stopping in any places on adjacent reels from the left.

Either way, stakes range from just 0.15 per spin, up to 125.00. This is a very easy game to play, as once you select your bet level, all you need to do is click a button to spin the reels. Like most IGT slot machines, The Twilight Zone gives you a couple of advanced options such as auto-spinning the reels and speeding things up with a fastplay mode. You can also play in 3D mode, which makes the symbols seem to float above the reels. 2D option is also available.

Rod Serling, creator of the TV show, can be heard over the classic Twilight Zone music. It adds to the eerie style of the game.

The reels are filled with symbols from the show such as a scary old lady, blinking eye, floating window, dinosaur and UFO. These pay out the best prizes, while standard playing card symbols return the smaller rewards. If you take a look at the paytable, you will see how much each symbol is worth as well as some details on the bonus features.

Although the bonus rounds can look a little complicated, on-screen instructions tell you exactly what to do. The Twilight Zone slot game is suitable for complete novices, as well as experienced punters.

The Twilight Zone slot machine comes with three main bonus features. Two of these are linked to episodes from the show. The 'Future Photo' round involves a camera that takes pictures of events yet to happen. If a camera symbol stops on the first three reels, you touch any of them on the screen to win an instant prize of between 25x and 100x your stake.

The glowing orb from The Twilight Zone triggers the other related feature when it lands on reels 1, 2, and 3. Once more, you need to touch a symbol on the screen to reveal a prize, this time it’s a number of free spins. During the free games, floating windows can appear and a touch on any in view will add further bonus games to the end of the current round.

While you have a great chance of launching either of these features, there is one more bonus hidden within The Twilight Zone. If you land the game logo symbol right across the reels, you claim a Mega Jackpots progressive prize. This can be worth a fortune as a small part of all bets placed on the game and across all casinos is put aside, waiting for one lucky player to land the prefect combination.

The Verdict And An Online Alternative

The Twilight Zone slot from IGT is an outstanding game that appeals far beyond the core fanbase of the TV show. The 3D effects, creepy style and exciting bonus rounds have turned it into one of the top attractions and physical casinos. If you can find it, this is a slot machine that we highly recommend.

However, the big problem is that it can't be played online or on mobile devices. If you can’t get to a bricks and mortar casino, check out A Nightmare on Elm Street from Section 8 Studios. Although the images of Freddy Kruger’s blood-spattered victims and the scratched playing card symbols could give you nightmares, the gameplay and features could lead to some sweet dreams.

The clawed hand of Freddy triggers up to 30 free spins, while a shadowy image of this terrifying character is a wild symbol that can expand to fill whole reels and double wins at the same time. You can enter a prize-picking feature with guaranteed rewards, and the 'Never Sleep Again' bonus is sure to keep you awake at night.

A Nightmare on Elm Street is a five-reel, 30-line game with a medium volatility and generous average returns of 94.87%. Unlike The Twilight Zone slot from IGT, it’s fully optimized to play on desktop PCs, iOS and Android mobiles. If you are feeling brave enough, track down this macabre game and other top-rated slots featured here.