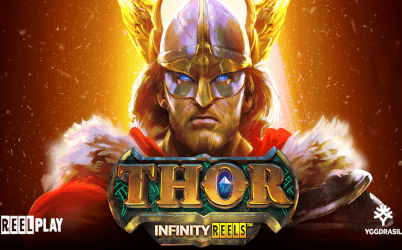 Yggdrasil brings a mighty Norse god to desktop and mobile casinos with their Thor Infinity Reels online slot. Developed in partnership with Reel Play, Thor Infinity Reels starts out as a 3-reel game with 4 rows of symbols. The number of reels grows on a win, and keeps on increasing for as long as you improve on the triggering combinations.

A progressive multiplier rises on the appearance of each new reel, and if you expand the game to 12 reels there’s a special bonus prize worth 888x your wager. Wild symbols help to complete wins, and a respin feature can lead to jackpots of 2,000x the stake.

Thor Infinity Reels is a high volatility game that has an average payback percentage of 96.2%. You can enjoy all of the style, features, and potential rewards on PCs, Android, iOS, and Windows mobiles.

How to Play the Thor Infinity Reels Slot

A frosty Northern forest, filled with the leftover swords of battle, stretches out behind the 3x4 grid of symbols. This dramatic image sets the scene for the Thor Infinity Reels slots game, and the highly detailed symbols add to the overall vibe. Playing card emblems in a Viking style join a horn, shield, helmet and axes on the reels, along with the hammer of Thor in various shades, and the god of thunder himself. He’s a wild symbol and can act as others to complete wins.

The Thor Infinity Reels slot machine is nice and easy to set up, and won’t be much of a challenge to even the least experienced players. You can play for between 0.20 and 40.00 on each spin, selecting a wager level via a click on the button that looks like a pile of coins.

Autoplay and fast-spin buttons customise the gameplay, and the ‘I’ button reveals the paytable. This shows you how much you win when 3 examples of the same symbol land across the reels, although as we shall see, any win triggers a thrilling bonus feature.

Whenever 3 matched symbols, with or without the help of the wild symbol, appear it triggers the Infinity Reels mechanism. An extra reel is added to the right side, and if this improves on the win by holding the same symbol or wild, another reel appears.

This carries on until a new reel doesn’t improve on the initial win, and there’s no upper limit to how many new reels can get added on. Also, the value of a combination rises by 1x for each additional reel, which can lead to some huge payouts. If you create a total of 12 reels, you also get a jackpot of 888x your wager on top of any winnings at the top New Jersey and top Pennsylvania online casinos.

Thors’ hammer, Mjolnir, triggers a respins feature when it lands in at least 6 places at once. The triggering symbols lock on the reels and only more colorful hammers or blank spaces appear for a series of respins. You get 3 spins to start with, but hammers reset the counter back to 3, and also lock in place. The feature ends on 3 respins without the appearance of Mjolnir, or all symbol positions are filled. You then collect cash awards of between 1x and 100x for each hammer in view, while the green, blue, red, and gold symbols pay jackpots of 10x, 50x, 250x, or 2,000x, respectively.

A combination of jackpots & hammer wins can lead to a prize of up to 6055x your total wager, or 242,200.00 at the highest stakes. This is a highly volatile game, with a decent average return to players percentage of 96.2%.

The Thor Infinity Reels online slot certainly looks the part, with some impressive style and symbols. The expanding reel set and rising multipliers on every win are an exciting feature that’s become hugely popular in a number of Infinity Reels games.

It’s not easy to extend the game to 12 reels for that 888x jackpot, but certainly possible, and even just 2 or 3 more reels can lead to high value prizes. Once the respins round begins, a win is guaranteed, and it’s here that you can scoop the biggest prizes of all at the best Pennsylvania slots sites and the top New Jersey slots sites.

Each time you land a winning combination across the 3 reels of the Thor Infinity Reels slot, it adds an extra reel to the right side. If this improves the win, another appears, and so on. A win multiplier rises by 1x on each successive reel.

Is the Thor Infinity Reels slot a successful game?

By following a popular theme and adding in plenty of exciting gameplay, the Thor Infinity Reels online slot is popular with many players. It’s available at some of the most widely-played online casinos, such as the ones we recommend here.

What symbols does the Thor Infinity Reels slot machine use?

The realistic images used in the Thor Infinity Reels slot include playing card symbols, a Viking helmet, shields, swords, and the famous Hammer of Thor. The hammer appears in several different colours during a respins feature, and Thor is a wild symbol.

Are there any games similar to the Thor Infinity Reels slot machine?

Norse gods star in several popular games, including the Odin Infinity Reels slot, which is part of the same series from Yggdrasil. Other games similar to Thor Infinity Reels include 2 Gods, Zeus vs Thor, where Norse and Greek legends battle each other across the reels.

Where should I play the Thor Infinity Reels online slot?

You can play the Thor Infinity Reels slot machine at the top-rated Yggdrasil online casinos. These sites welcome you with generous bonus packages, and feature a huge collection of great games, as well as plenty of safe, secure deposit and withdrawal options.

How much can I win playing the Thor Infinity Reels slot?

Wins from the Thor Infinity reels slot can reach 6055x the total wager. At the highest stake of 40.00, that adds up to a prize of 242,200.00, which is a little less than many highly volatile games such as this. However, it means the top prize is easier to reach.

Is there a free spins feature in the Thor Infinity Reels slots game?

Instead of free spins, the Thor Infinity Reels online slot has a respins bonus round. You get 3 respins with only hammer symbols and blank spaces, with more hammers resetting the spin counter back to 3. This carries on and at the end, you can collect win multipliers and jackpots.

Does the Thor Infinity Reels slot have a good payback percentage?

As a long-term average, players win back 96.20 for every 100.00 placed in wagers on the Thor Infinity Reels slot. This translates as a 96.2% return to players figure, which is about what we expect to see from a high volatility game.

The Thor Infinity Reels slots game is developed by Reel Play, and released under the Yggdrasil brand. By working together, these developers can offer more games and more variety to online casino players.

When was the Thor Infinity Reels slot released?

The Thor Infinity reels slot was launched on 8th February 2021.