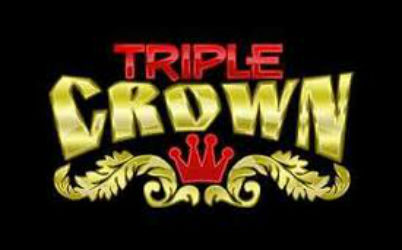 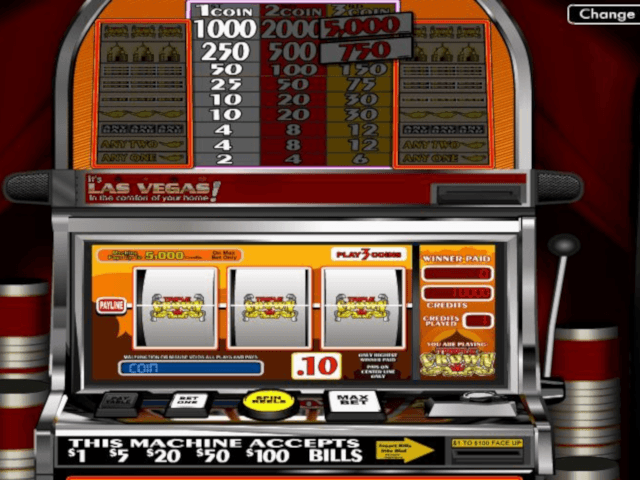 There are some slot machines that you need a manual to understand and there are those that are as straightforward as possible. Betsoft's Triple Crown slot is a proud member of the latter category, giving you an online slot experience like you could once have found in your land-based casino. Featuring a simple three-reel screen with a single fixed payline, Triple Clown may not impress you with its features but it can still pay you good prizes when you play at a real money casino, up to 5,000 coins a spin.

What traditional gamblers will like about the slot is that it perfectly replicates the feeling of playing an old mechanical machine, offering no more bonus features than its special three-coins prize. If you're interested in retro casino games, check out our in-depth review below to learn more about the Triple Crown slot machine.

Triple Crown by Betsoft would be a great game to start playing slots with as it is just so simple. Like with old coin-operated machines, you'll need to start this game by choosing the size of your coins with the clickable coin control. Once you do, just push the "bet one" button to place one, two, or three coins per round and then hit the spin control to begin earning real money. The wagers start at 0.01 credits per spin with the minimum coin size but they can also go up to three credits if you go all in.

One of the unique things about the game is that it has but one fixed payline, which makes it really easy to track your winnings. If you play in "wide" view, you'll also be able to consult the paytable any time you want because the prizes will be displayed at the top of the machine. The payouts are always shown in coins and they are split into three different sections that you can access by betting more coins per round. If you play with a minimum bet, you'll only get prizes of two to 1,000 coins. Play with three coins per round and you'll get a shot at the 5,000 jackpot!

Like most old slot machines that are still active online, the Triple Crown slot can't be played on Android and iOS-based smartphones and tablets. While some of Betsoft's early works were updated with a mobile-friendly version, Triple Crown was kept active only as a Flash game.

The gameplay of Triple Crown by Betsoft is as old-school as can be. After each spin you play, the slot asks you to use the "bet one" control again to place a coin and think about whether you want to increase your bet to win more. The prizes increase proportionately as you bet more coins per spin, offering you double or triple the returns you get on a minimum bet.

Most of the time, you'll need to collect three of the same symbols on the middle payline in order to get paid. The best-paying icons are the triple BARS, temples, and crowns which offer the biggest returns in the slot, starting with 20, 250, and 1,000 coins, respectively, when playing on a minimum bet. You can also win consolation prizes by collecting just one or two lamp icons as well as by collecting a mixed set of any BAR symbols.

The only bonus offered is the special prize given by the crown symbols when playing with three coins per round. Instead of paying a top prize that's only three times higher, a combination of three of these symbols on the max bet will pay you a jackpot of 5,000 coins – a prize that is five times bigger than the best payment you can receive on a minimum bet.

As one of the simplest slot games that you can play online, Triple Crown by Betsoft will mostly attract old-school players or gamblers who are trying out slots for the first time. It's a game of medium volatility that offers you a chance to bank a wide range of payouts, from small returns of two coins to prizes as large as 5,000 coins per spin, even while playing with only a few pennies per round. As implied by the game's low hit rate, bigger payouts won't be unreachable when you play for real cash, although it will take some patience to bank a proper win. Play through a real money casino if you're looking for a straightforward slot game, but only if you don't mind playing on a desktop or a laptop.

For those searching for something more rewarding, Betsoft also has a couple of high-variance classic slots that offer more risk and better prizes which you may want to try. Check out the very simple Mega Lines for another three-reels slot machine, but one with a bonus repeater screen that can end up producing a series of free prizes. For even more rewarding games, you also have the Jackpot Ultra, which gives you two three-reels screens and a progressive jackpot, and the Jumbo Joker, which likewise gives you two screens but also mobile-optimized gameplay. When these slots aren't enough either, you can head down to some of our top-rated online casinos to try other Pennsylvania slots or New Jersey slots.