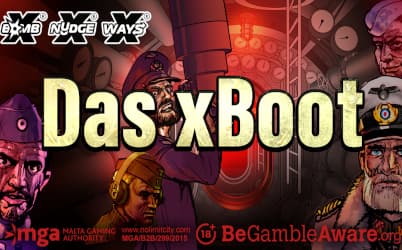 Play Das xBoot For Free!
Bookmark It For Later 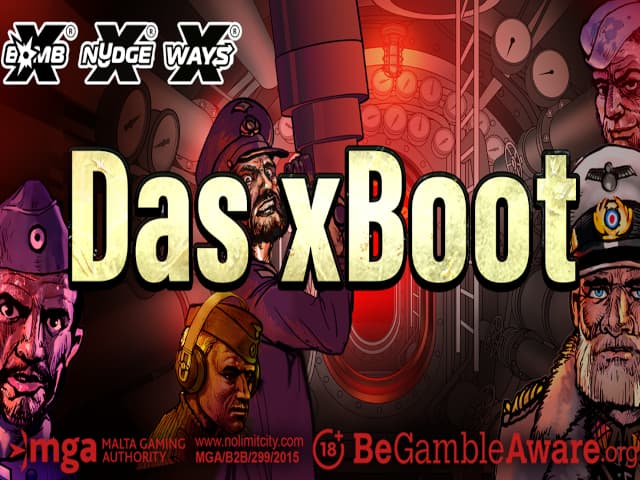 Nolimit City have built an excellent reputation for exciting games and their Das xBoot online slot will certainly enhance it even further. Set within the confines of a German U-Boat, this thrilling game comes with an incredible array of extra features. Stacked wilds with multipliers, split symbols, and 2 free games rounds are among them.

You’ll find 6 reels of undersea adventure crossed by anything from 576 to 75,712 ways to win. It’s a highly volatile slot with average returns of 96.03% and a massive win potential of 55,200x your wager. Avoid the minefield and play the Das xBoot slot game at our carefully chosen desktop and mobile casinos.

How to Play the Das xBoot Slot

Clearly influenced by the classic 80’s Das Boot TV series, the Das xBoot slot sees a battle-weary crew across a 2-3-4-4-3-2 grid of symbols. Playing card emblems, designed to look like serial numbers on the side of the vessel, also appear, along with mines and radar screens. Various pipes, valves, and pressure gauges sit above the reels, with the submarine patrolling the depths behind. It’s a fantastic-looking game, accompanied by a soundtrack of metallic noises, sonar pings, and dramatic music.

Once you load the Das xBoot slot onto your PC, Android, Windows, or iOS mobile, you’ll be able to start playing in seconds. Choose a wager from 0.20 to 100.00 via a click on the ‘$’ symbol at our recommended online casino sites. Other user-friendly controls include the lightning bolt that triggers a fast-spin option, and the arrow pointing right which activates Autoplay mode.

Tap the 3 dots to open up the paytable, and you can see how much each symbol pays when you land at least 3 of a kind on sequential reels from the left. The white-bearded captain is the most valuable, and worth 20x your bet when seen across all 6 reels.

As far as bonus features go, the Das xBoot slot, along with similar Nolimit City games, blows others out of the water. xNudge wild symbols act as others if needed and will nudge up or down until they fill whole reels, with a multiplier increasing by 1x for each step. Several xNudge wild multipliers can combine for big wins.

xWays symbols are another Nolimit City specialty, and they have the power to split into stacks of 2 or 3 examples of another symbol. This increases the number of ways to win, improving the chances that you collect a prize.

A sea mine xBomb wild symbol explodes to blast away all non-winning symbols at the end of a spin. The remaining symbols drop to the bottom of the reels, along with xBombs, and new symbols fall from above to potentially create a new win.

Any 3 sonar screens trigger 8 Silent Hunter free spins. Reel 3 expands to 8 rows high. A wild periscope appears on this reel, and whenever it completes a win, an outstanding animation sees you fire torpedoes at enemy ships. Hit a ship to expand the periscope wild and increase a win multiplier by 1x.

Land 4 sonar screens to launch the Wolf Pack free games feature. A torpedo appears below the middle reels and wild torpedoes above will see xWays symbols fill 1 of its 4 sections. Multipliers increase as you build the torpedo and add xWays symbols to the main game, giving you many more ways to win, along with an extra multiplier.

Das xBoot is classed as a game with extreme volatility, so be prepared for a greater number of losing spins than in many other games, countered by higher than average prizes. The long-term payback percentage is 96.03%.

Our Verdict on the Das xBoot Slot Machine

Hold your breath for a high pressure game with incredible features. Das xBoot looks great and you’ll discover real depth to the gameplay, with xNudge wilds, xWays, and 2 thrilling free spins features. It’s a complex game, so perhaps not suited for beginners, but if you like slot machines packed with action and adventure, be sure to unleash Das xBoot at the top online slots sites today.

Where can I play the Das xBoot Slot?

We’ve sourced the best online casinos that feature the Das xBoot slot machine. These sites have great bonus offers, a huge choice of games, safe deposit and withdrawal facilities, and a guarantee of fair play at all times.

What is the maximum win from the Das xBoot slot game?

You can win 55,200x your total wager from the Das xBoot slot. This vast prize is achievable during a bonus round, and if you reach it, the feature comes to an end automatically. It’s an impressive potential win multiplier that could lead to a multi-million payout.

What is the xNudge feature of the Das xBoot online slot?

xNudge wild symbols move up or down, one row at a time, until they fill a reel. A multiplier increases by 1x on each nudge, and it’s applied to any win made by the wild symbol once it is in position. Multipliers from more than one xNudge wild will combine with each other.

Does the Das xBoot slot have any other features?

The Das xBoot slot is packed with other features. xWays symbols can give you up to 75,712 ways to win as symbols split at any time. An exploding wild symbol helps to complete wins and there are 2 free spins features with stacked wilds, more xWays, and other perks.

Should I always wager the maximum on the Das xBoot slots game?

The maximum wager on a spin of the Das xBoot online slot is 100.00. You should only ever play at a comfortable level and there’s certainly no need to wager this much if you don’t want to. Lower-stakes players can go for wagers of just 0.10 per spin.

What symbols does the Das xBoot slot use?

The Das xBoot slot is based around the high-pressure environment of a German U-Boat. Symbols include various members of the crew, a sonar screen, and playing card symbols which resemble letters on the side of a submarine.

What slots are similar to the Das xBoot slot machine?

If you like the style of the Das xBoot slot, you should try similar games like Battleship from IGT, or Submarine by Octavian Gaming. For similar features, but a different theme, be sure to play the Mental online slot by Nolimit City.

Is the Das xBoot slot a good game?

The Das xBoot slot is an excellent choice for anyone who likes action-packed games and a WW2 theme. You’ll find fantastic animations, and an incredible collection of features. Like the subject matter, it’s filled with drama and excitement.

When was the Das xBoot slot machine released?

Launch day for the Das xBoot slot was 14th September 2021.