Indeed, some golf betting sites have priced Woods as big as 55/1 to win the PGA Championship. That’s a fair bit wider than the 33/1 odds on his claiming the Masters in April – but it’s still enough for Woods to be in the top 20 golfers most likely to taste success this weekend.

Fast-forward two months and top-seed Scheffler – 9/1 to win here – has played in just one further tournament. The 25-year-old is hoping to carry his Masters form straight into the PGA Championship and is keeping a low profile heading into the weekend. 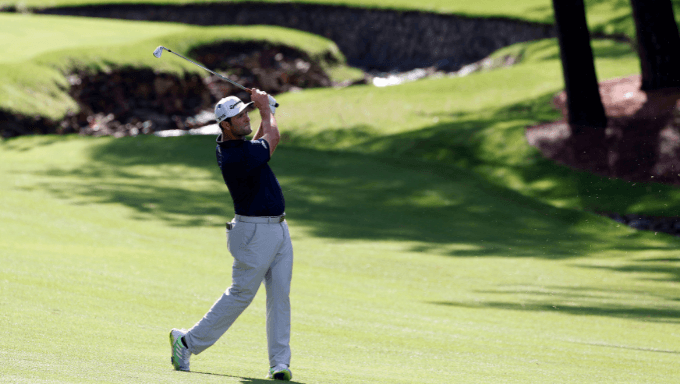 At 11/1 Rahm has attracted around 5% of all wagers on the PGA Championship winners odds so far. That could well change if he starts fast here.

Another Masters went past without Rory McIlroy donning the Green Jacket this spring but his second-place finish was at least a career best at Augusta for the Northern Irishman.

Now attention turns to the Championship he first won a decade ago. McIlroy has twice won the USPGA but his recent performances in this tournament have been woeful. What’s more, McIlroy is still seeking a trophy this year.

He has, however, regained a modicum of form in the guise of two top-five finishes in his last two outings. On top of this, McIlroy is hitting the ball well and his approach game is as good as anyone’s.

The bookies price McIlroy as the third favourite at 14/1 to win here. That’s a tall order for a player who last won a major in 2014, and who can often fade into obscurity before the weekend truly gets going.

Best of the Rest

Woods is a 55/1 outsider to win the PGA Championship and there are 19 players ahead of him, according to the bookies. Of those, Jordan Spieth is well priced at 18/1 considering the Texan won the RBC Heritage in April. Spieth also placed second behind Lee Kyoung-hoon at the AT&T Byron Nelson last weekend – a result that probably revealed more than the Heritage Classic about his recent form.

Shorter than Spieth at 16/1 is Justin Thomas, who hasn’t really impressed since the Valspar Championship in March. Thomas has been one of the biggest critics of the defecting golfers to Saudi Arabia’s LIV Golf Tour, and could well be a popular figure on the course in Tulsa.

Collin Morikawa (16/1) was one of the favourites to win the Masters but his odds have slipped here after a 26th-place finish at the RBC Heritage. Meanwhile, Patrick Cantlay has seen his odds come in from 22/1 to 16/1 off the back of an impressive second-place finish at Harbour Town.

Other players whose odds have recently come in include Hideki Matsuyama (to 25/1), Shane Lowry (28/1) and Matt Fitzpatrick (33/1). Some bookmakers are even offering Woods odds as high as 70/1 – although this is currently the outlier price that is going against the trend.

© PA
Jamie Casey
3 mins
Liverpool Quadruple Odds: Can Liverpool Win All Four Trophies This Season?
Can Liverpool do something that has never been done in English football history?

© PA
Martin Green
6 mins
Premier League Sack Race: Which Club Will Blink First This Season?
Gambling.com analyse the odds on who will be the next Premier League boss to leave his post.

© PA
James Leyfield
6 mins
Love Island Odds 2022: Davide And Ekin-Su Are Clear Favourites Going Into The Final
We analyse the latest odds on who will be crowed king and queen of Love Island 2022.