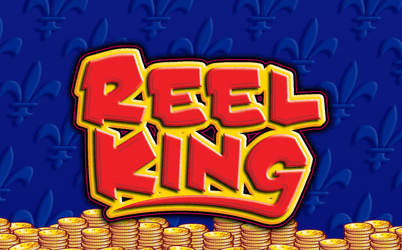 With a fun theme and a handful of rewarding bonus features, Novomatic's Reel King knows how to keep the nationals of the online casino world satisfied!

Politics can be complicated, but the Reel King seems to know what he’s doing. This video slot from Novomatic seamlessly mixes the old with the new. Fans of classic slot machines will immediately recognise the theme, while modern punters will be happy to see a few extra features added.

The Reel King slot has 5 reels and 20 paylines and basically looks like an extended fruit machine against a royal blue background. Players can choose to de-activate some of the paylines, which can be handy when you’re on your last couple of cents. However, players needn’t worry about their money, because this slot can be enjoyed from as little as 0.01 per line. The maximum bet is 40.00, meaning you can bet 2.00 per line at most.

Betting is made simple by the handy Auto Play button that is present on all Novomatic slots. There is no limit to the amount of times you can let it spin on its own. It’ll keep going until you hit the Stop button or until you’re out of money, so make sure to keep an eye on your bankroll.

Symbols of the Reel King online slot include a bunch of colourful card symbols (10, J, Q and K), cherries and plums to generate some low value winnings. The symbols pay from left to right and must be consecutive. The wild symbol, a jester hat, can help to complete a winning combination on reels 3 to 5. Unlike most online slots, the wild symbol in this game can take on any symbol, which can lead to some nice payments.

Players should also look out for the jackpot symbol. Not only is this symbol the highest paying symbol in the game, if you manage to land 15 jackpot money bags, covering the whole grid, you will be rewarded up to 20.000!

Lastly, there is the Reel King bonus feature. This feature can be achieved a lot easier as it can be triggered at random. This means that a losing spin could potentially still be a winning one! During the Reel King bonus a new symbol is thrown into the mix: the seven. There are three winning combinations in this bonus game:

Up to 5 special Reel King characters can appear on the reels and reward you with a whole bunch of prizes based on the winning combinations above. The feature pays between 5 and 500 times the total bet.

Despite its simple layout, the Reel King has certainly proven why it belongs among royalty in the world of online gambling. The gameplay is easy to understand and there are plenty of interesting bonus features to rack up those winnings. If only every king was that generous!