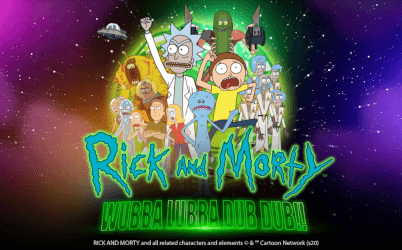 Join a mad scientist and his high-strung grandson in the Rick and Morty Wubba Lubba Dub Dub online slot, the second game based on the Cartoon Network show. This 5-reel, 20-line slot has stacked wilds, random wilds, respins and free games. This medium volatility Blueprint Gaming online slot has a 96.14% average RTP and it’s possible to win a massive 5,000,000 credits at the highest stakes. 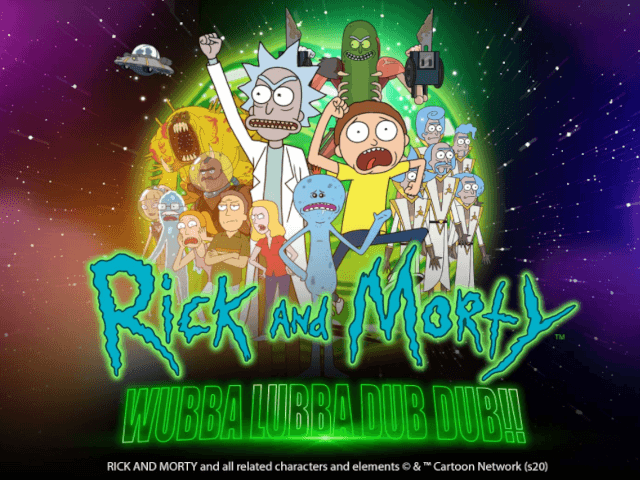 If you haven’t seen the Rick and Morty TV show, you might wonder what the heck is going on. But fans will absolutely love the images of the two main characters, aliens, spaceships and strange planets on the 5x3 grid of symbols. The show is filled with crazy adventures and this slot – suitable for PC, iOS, Android and Windows – is just as action-packed and has numerous bonuses.

There are 9 in-game reel modifiers, such as the stacked and random wild symbols, plus 6 bonus rounds triggered by a spin on a special wheel. You can enjoy free spins, prize-picking features and a multiplier trail. The maximum win is 50,000x the stake, which is way more than most games can offer at the top online slots sites.

You can select stakes of between 0.10 and 100 credits on each spin of Rick and Morty Wubba Lubba Dub Dub at the best online casino sites. User-friendly controls make it easy to set up across desktop and mobile versions, plus it comes with control options such as Autoplay and Fast-Spin.

It’s a 20-line slot and you win by matching symbols across a line from the left side. Click the 3 little lines on the left side of the controls to open up a paytable, where you see how much each symbol is worth, and where you can read an introduction to each of the many features. The game logo is the most valuable symbol, paying 25x your bet when it lands right across a payline.

Few games have as many bonuses as this one, and somehow, Blueprint Gaming has managed to link each round to the crazy adventures of Rick and Morty. The randomly awarded in-game features include:

Any 3 or more scatter symbols take you through to a bonus wheel. You can gamble for enhanced features, or spin the wheel to see what bonus plays out. These could be any of the following: Rick ‘N’ Roll Megabucks spins played on a 5x5 grid with prizes hidden behind portals; Mr Meeseeks free spins, where multiple wilds appear on the last of the 10 bonus games; Unlimited Evolution of the Pickle free games played out on a 5x4 grid with 40 paylines; expanding wilds during the Anatomy Wild Monster free games; Pilot Bonus, where you select portals to match various characters from the show for prizes; or Rick, Rattle & Roll Chase, where you help them to flee the Gromflomites through a multiplier trail.

As well as having a lot of bonuses, the Rick and Morty Wubba Lubba Dub Dub slot machine also has one of the biggest win multipliers. You can win a massive 50,000x your real money slots stake here, which at 100 credits per spin equals 5,000,000 max payout! The average payback percentage of 96.14% is also quite good for a medium volatility game.

The Rick and Morty Wubba Lubba Dub Dub online slot is highly likely to draw fans of the show. But the bonus features, massive potential returns and hilarious comedy will certainly appeal well beyond the existing fanbase. If you like games with multiple bonuses, play it at the best Blueprint Gaming casinos, such as the ones featured here, where you can collect the biggest online casino bonuses.