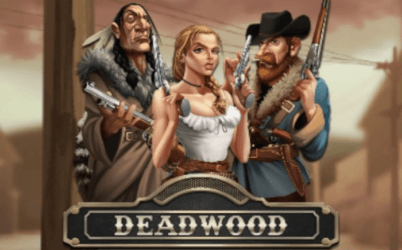 Deadwood, Nolimit City’s sequel to Tombstone, takes you to a dusty old town serving as a hideout for some of the West’s biggest lawbreakers and degenerates. It’s a high variance, standard RTP game in which you’ll join up with three sharpshooting bounty hunters who are out to make a serious killing. So get ready to draw, gunslinger; the Deadwood online pokie is available now at top online casinos. Read our full review below!

If you’re a fan of classic movies like The Good, The Bad and The Ugly and Hang ‘Em High, then you’re going to enjoy playing the Deadwood pokie. The American Wild West serves as the terrific backdrop for this bounty-hunting, outlaw apprehending epic tale.

All of the recognisable emblems of cowboy culture are present in the Deadwood pokie; the symbols, for example, are made up of gold bars, dollar-signed swag bags, sheriff badges, whiskey decanters and double-barrelled shotguns. Nolimit City have really done a terrific job at putting the player in the shoes of a gunslinging bounty hunter.

The variance for the Deadwood pokie is high and the RTP of 96.03% is close enough to industry average for a pokie game. With 576 different ways to win, the maximum prize you can come away from a Deadwood play session with is a whopping 13,950x your stake.

The Deadwood pokie is a direct sequel to Nolimit City’s Tombstone, and as such the controls are extremely similar. On desktop the game is set up in a, by modern pokie standards, slightly unusual way, with the reels taking center stage but the controls falling to the bottom left and right of the screen.

If you wish to do so, you can put stop conditions in place when using the autoplay function for the Deadwood pokie. To do this you need to click autoplay and choose whether you’d like the game to stop when you win above a defined amount or stop when your balance dips below or goes above a defined percentage.

Deadwood is available to play on both iOS and Android devices and the experience doesn’t differ much from desktop play. The only noticeable difference is that the settings are placed differently to accommodate the game being played vertically as opposed to landscape.

The base gameplay in Deadwood, which uses a 3-4-4-4-3 reel format is very similar to it’s predecessor with one major difference: the 5 reels have been made bigger to allow for an extra symbol on each reel. This means that there are, in theory, 576 ways to win while playing in contrast to the 108 ways of winning in Tombstone.

How do the Deadwood Wilds Work?

The Wild that you’ll come across most often in Deadwood is the Hunter Wild, a fully stacked symbol that may appear in the center three reels. If it only appears partially then the xNudge feature can knock it into place, covering the full reel.

There are two free spins modes that can be activated in Deadwood. These activations happen when you land a minimum of three cattle skulls across any of the reels. You will then be given the option of 8 Hunter free spins or 8 Gunslinger free spins.

Gunslinger free spins are more volatile. For every Hunter wild that hits a multiplier will be triggered which keeps ascending after each nudge and won’t reset before the round finishes. If a sheriff’s badge lands in the first or fifth reel you’ll get an extra free spin. If it lands in both reels at the same time you’ll be given a chance at the Shoot Out free spins upgrade.

In the lower volatility Hunter free spins round at least one of the Hunter wilds will land per spin. The same rules apply when it comes to the sheriff’s badge, so there’s also a chance to upgrade the feature and grab yourself some Shootout free spins too.

The biggest wins you’re going to get while playing Deadwood will come during the Shootout round. During this mode the sheriff’s badges stay in position. The Shoot Out feature transforms all of the low value symbols that come up on the middle three reels into wilds.

The Deadwood online pokie has a max win of 13,950x your stake and has a slightly above average return to player percentage of 96.03%. The base volatility of the Deadwood pokie is high. This means that you should expect less frequent but bigger wins than you would experience in a lower volatility game.

The Deadwood online pokie places the player smack bang in the middle of the Wild West and delivers on all fronts. The theme has carried over really well from Tombstone and everything from the visuals to the music makes you feel like you’re in a Clint Eastwood flick. While you may not be a fan of the high volatility, the free spins rounds are absolutely thrilling in this game and make for some truly exciting classic pokies moments.

If you’d like to try a Wild West pokie but the high volatility is putting you off Deadwood we’d recommend trying one of the following in its place:

However, if you’re ready to holster up and play some Deadwood now check it out at one of our recommended online pokies sites now!