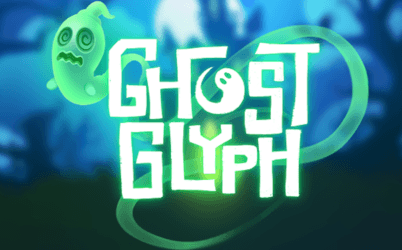 The Ghost Glyph online pokie from Quickspin features plenty of spirited gameplay and bonus features. It’s set in a haunted mansion, where cartoon spooks appear over a 7x7 grid, and has a cluster pays system where ghosts appear on every win. Fill any of 4 urns to trigger bonuses, such as symbol upgrades, random wild symbols, and free spins. Ghost Glyph is a medium to high volatility game with average returns of 96.18%. You can unleash the ghosts for a wide range of stakes across desktop and mobile platforms at the top-rated casinos featured here at gambling.com.

Play Ghost Glyph For Free!
Bookmark It For Later 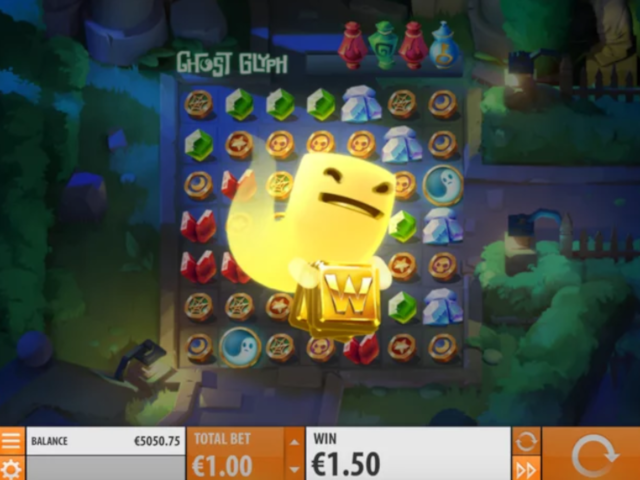 There’s no need to be afraid of the ghosts haunting the reels of the Ghost Glyph pokie, as these are cute, cartoon characters who only want to help you to collect winnings at the best online pokies sites. The action moves around the grounds and interior of a mansion, and there’s a suitably haunting soundtrack to accompany each spin of the symbols.

You need to see clusters of 5 or more matching symbols to win a prize, with 4 haunted coins worth less than the 5 colourful crystals. Winning clusters vanish and new ones tumble from above to fill the gaps, hopefully leading to new groups of matching symbols.

Ghosts appear in each win, which in turn, trigger the Urn features. Once all urns have activated, a free spins round begins, where every win in a series of tumbles adds giant wilds to the grid. You can spin up a prize equal to 2260x your stake, or 226,000.00 if you play with the maximum wager.

How to Play the Ghost Glyph Pokie

That maximum is 100.00 per spin, or you could play with as little as 0.20. The Ghost Glyph pokie machine uses the standard Quickspin control panel, which is good news as it’s very easy to use. Simply click up or down arrow buttons to select stakes, and then tap the circular arrow to spin the reels.

Options include fastplay and automatic spins modes, and you can play the Ghost Glyph pokie on PCs, iOS, Android, or Windows-powered mobiles. On the left of the controls, you’ll find 3 lines, and these open up the paytable. It’s here that you see how much each symbol is worth and how the various bonus features come together to boost your winnings.

When winning symbols vanish and new ones drop from above, 1 of the 4 ghosts appears on the grid, staying in place for any further tumbles in a series. The ghost is a wild symbol, and if it helps to create new wins, it fills an urn above the reels.

Once the urn is full, the ghost rewards you with its special powers. The yellow ghost adds between 4 and 10 extra wild symbols to the grid, while the red spook removes all lower paying symbols, making it easier to claim some high value wins.

If the green urn fills, 1 of the lower value symbol transforms into a high value one. The blue ghost urn triggers a free spins bonuses round, with an initial 8 extra spins. During this feature, new urns appear, along with a Parnormality Meter. Each tumble now adds to the 8 levels of the meter, causing a wild symbol to grow in size. If you fill the meter, this giant portrait of a king is added to the reels on the last free game to give you a huge win.

Fill the grid with the highest paying symbol and you win 2260x your bet. It’s not a huge win multiplier compared to many games, but still equals 226,000.00 at the maximum bet. This is a medium to high variance game, where as a long-term average, 96.18% of money staked on the game is paid back as prizes.

The fun cartoon style will appeal to many players, while the unique bonuses are enough to attract anyone to the Ghost Glyph online pokie. You can get win after win from the tumbling reels mechanism, especially from the wild ghosts that appear each time. You might not manage to fill urns each time, but once you do, the odds of collecting yet another prize goes up.

If you prefer scarier games, try the House of Doom pokie from Play’n GO, where devilish symbols appear across 5 reels and 10 lines. Expanding wilds and free games are among the features. Visit our top online casinos to enjoy these and many other games.