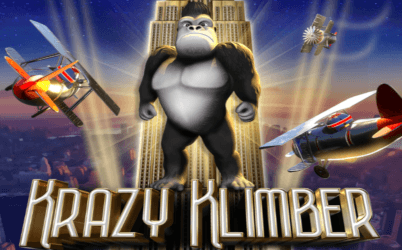 The Krazy Klimber online pokie from Yggdrasil is based on a famous tale that uses the same initials. The story of King Kong and his ascent up the Empire State Building is covered in this desktop and mobile-compatible game.

You’ll encounter biplanes, vintage movie cameras, the worlds’ most famous skyscraper, and a big ape across the 5 reels and 20 paylines. A fun bonus feature sees Kong climbing the tower, and he awards either win multipliers, or free games with giant wild symbols filling whole reels.

It’s a medium volatility game with an average payback percentage of 94.1% and maximum wins that can reach the dizzying heights of 1,257x your bet.

How to Play the Krazy Klimber Pokie Machine

We’re guessing that Yggdrasil and their partner studio Reflex Gaming can’t use the King Kong name, but there’s no doubt about the inspiration. A mysterious island with a skull on top, a blond woman in a white dress, and a wild ape all feature here, with a pleasing cartoon aesthetic adding to the fun. Playing card symbols also feature on the reels, and there’s an Art Deco style and Jazz soundtrack to match the 1930s setting.

The stylish controls are easy to use, with a couple of clicks on up and down arrows setting your bet level. There’s a range of 0.20 to 100.00 available, and lots of options in between to match different bankrolls.

You win by matching at least 3 examples of the same symbol on adjacent reels across any of the 20 paylines from the left side. Autoplay and Turbo modes can be switched on or off with the press of a button and it all works just as well on iOS, Android, and Windows mobiles as it does on PCs, at all the best online casinos.

Before you start any game for the first time, it’s always a good idea to check out the paytable, and you can reach the Krazy Klimber table by clicking the ‘I’ tab. This reveals how the bonus features work, and how much you win from each symbol. The game logo against the Empire State Building is the most valuable, at up to 50x your bet.

Kong is a wild symbol who can stand in for others to complete wins, although he’s not worth anything on his own. An image of Kong and a plane in any 3 or more places will start a fantastic Climb Feature, with guaranteed wins or bonus games. The game pans upwards until the scene changes to the Empire State Building, with Kong climbing up the side and a big bonus meter to the left.

He climbs up to a random height and you win whatever is on the same level, which could be 10 or 20 free spins, or an instant cash award of between 50x and 1,000x your bet. If you get the free spins, they start with a prize of 2x or 10x, so once triggered, the Climb feature will always pay a prize.

During the free games, Kong becomes a stacked wild symbol that fills reels, making it more likely that he’s in the right place to complete combinations. It’s a potentially rewarding feature, but you can’t retrigger the round and you return to the base games once the free spins come to an end.

You can win up to 125,700.00 from the Krazy Klimber pokie if you play with the maximum bet level. That’s quite low, but also slightly easier to reach than games with potential wins of many thousands of times the stake.

Krazy Klimber is a medium volatility game where the long-term expected payback percentage is 94.1%. We would expect a medium variance game to pay back at least 94.5 – 95%, so it’s a disappointingly low RTP.

In some ways this is an excellent game, but the relatively small maximum win and low average returns mean that it doesn’t quite climb to the heights of other pokie games. However, it looks good, with some fun animations, and once triggered, the Climb bonus feature is an enjoyable round, with the added benefit of a certain win.

Will you go ape for the Krazy Klimber pokies game? Check out the best Yggdrasil online casinos to find out for yourself.

What is the Krazy Klimber pokie themed around?

The Krazy Klimber pokies game is themed around King Kong. The symbols include vintage airplanes, an old movie camera, Skull Island, and a damsel in distress. Kong is a wild and bonus symbol, and the Empire State Building is the highest paying symbol of the game.

How much can I win from the Krazy Klimber online pokie?

You can win up to 1257x your total bet playing the Krazy Klimber pokie machine. That adds up to 125,700.00 at the highest possible stake. It’s somewhat less than many other games, but is also a more realistic target than others.

How many paylines does the Krazy Klimber pokie have?

The Krazy Klimber pokie is a 20-payline game. It features 20 defined pathways from left to right across the reels and to win, you need 3, 4, or 5 examples of the same symbol on adjacent reels. A wild symbol helps out by acting as others whenever possible.

What is the Climb feature of the Krazy Klimber pokies game?

Any 3 or more bonus symbols trigger the fun Climb feature. Kong starts to ascend the Empire State Building and you win a guaranteed prize when he stops. Rewards include bet multipliers of up to 1,000x, or free spins with stacked wilds in play throughout.

How volatile is the Krazy Klimber pokie?

This is a medium volatility game that pays out average-sized prizes, with an average frequency. Of course, this is a long-term figure and over the course of a session, the Krazy Klimber pokie payouts can vary substantially.

Should I always bet the maximum on the Krazy Klimber pokie?

The maximum bet on the Krazy Klimber pokie is 100.00 per spin. It’s not necessary to play at this level and you should only ever bet with money that you afford to lose. The minimum stake is 0.20 for each spin and you will find plenty of in-between levels to match your budget.

Can I play the Krazy Klimber pokie on my iPhone?

The Krazy Klimber online pokie is compatible with iPhones, iPads, Android, and Windows mobile devices. It’s designed to work in exactly the same way across all platforms, so you can enjoy the game wherever there’s a Wi-Fi or mobile connection.

Are there any games similar to the Krazy Klimber pokie machine?

King Kong is a popular topic with game developers and players. He’s the star of many other games, including the King Kong Cash pokie machine from Blueprint Gaming, and King Kong Fury by NextGen Gaming. Each of these pokies comes packed with exciting extra features.

The Krazy Klimber pokies game comes from Reflex Gaming. It’s released as part of the YG Masters programme from Yggdrasil and you can play it at Yggdrasil-powered online casinos. You’ll also find a huge selection of other pokies from these developers and many more.

When was the Krazy Klimber pokie released?

The Krazy Klimber pokies game was released on 17th June 2021.