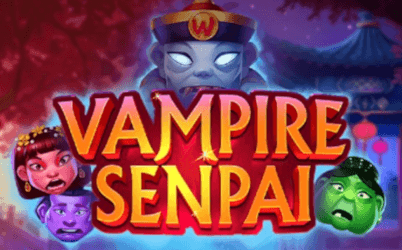 An Asian ghost haunts the reels of the Vampire Senpai pokie from Quickspin. This fun, cartoonish game takes you on a supernatural adventure over 5 reels and 40 paylines, where you can land up wins of up to 8894x your bet. Available to play across desktop and mobile casino platforms, Vampire Senpai uses a medium variance mechanism and has high average returns of 96.19%. Read our review of this spirited game, to see how it works. 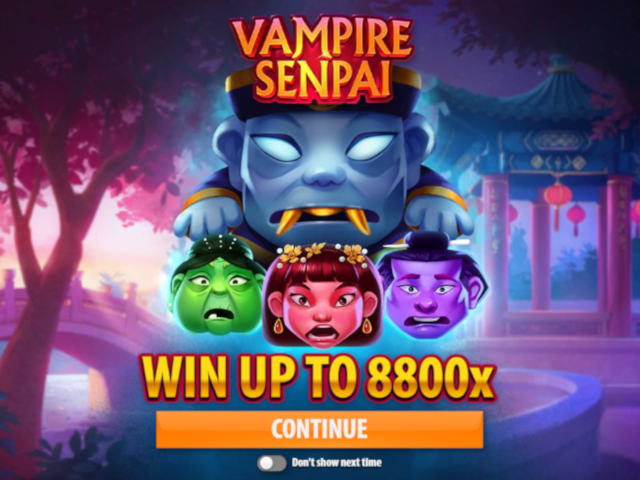 A 5x5 grid of Asian-style playing card symbols, high-paying characters, and the vampire sits under a classic pagoda roof. Red lanterns swing in the breeze and the Vampire Senpai online pokie sets the whole game in a tranquil Oriental garden.

It comes with features such as wilds that infect surrounding symbols, and a free games bonus round where wilds lock in place. You could also land mystery wilds in any spin, helping to complete combinations across the 40 lines.

Quickspin has ensured that the Vampire Senpai online slot is easy to use, attracting players with all levels of experience. But it also comes with the potential for big wins, and at the maximum stakes you could claim a prize of NZ$889,400.00 with the best online pokie sites.

How to Play the Vampire Senpai Pokies Game

The Vampire Senpai slots game has a very easy to use set of controls that makes it ideal for newcomers to online casinos, but flexible enough for those of us who have been playing pokie machines for years. A few click on the UP and down arrow buttons is all it takes to select your bet level, which can be from as little as 0.10 per spin to as much as 100.00.

Fast play and auto-spin modes are available, and the Vampire Senpai pokie works across PCs, Android, and iOS-powered mobiles without any compromises on the style, features, or control options.

Before you play, click the ‘I’ tab to open up the paytable. You’ll then see how much each symbol is worth, and how the multiple bonus rounds play out. The different wild features are worth looking at before you play for real cash.

The vampire is a blue-tinted character in a traditional Asian outfit. He’s a wild symbol who can stand in for others if needed, but also has the power to infect any of the other 3 characters adjacent to him. This converts them into Turned Wilds, making it more likely that you get a win from the feature.

The Talisman Mystery Wilds feature is a randomly awarded bonus, where between 3 – 9 scroll wilds are placed on the reels A bell bonus symbol in 3 or more places unlocks the Re-Animated Free Spins round. You get 7, 9, or 12 free games from 3, 4, or 5 bells, and any wilds add 1 extra spin to the total.

When the Vampire Senpai wild symbol appears, he stays on the reels, hopping around to different positions for any remaining spins. You could easily see several vampires leaping about at the same time before the end of the round. Talisman wilds lock into the same spot for the rest of the free games feature.

On top all this, Vampire Senpai is worth twice as much during the free games. A full line is worth 20x your stake in the base games, and 40x throughout the feature.

This is a medium variance game, so you can expect to land a win quite often, with average-sized prizes compared to other games. With the ideal mix of symbols, you win 8894x your bet, which is an excellent NZ$889,400.00 if you have 100.00 staked on the triggering spin.

Like all games from Quickspin, Vampire Senpai has a generous return to players percentage, which in this case, is 96.16%.

The cartoonish symbols add a sense of fun to the Vampire Senpai slot machine, but it has some serious winning potential, especially from the wild symbols. Spreading wilds will usually result in a win, and we found that the Mystery Talisman feature almost always created a winning combination.

Hopping wild symbols and locked wilds can turn the free games round into a fun to watch, and highly rewarding feature. Anyone who likes cartoon creatures should play the Thunderstruck II Online Pokie from Microgaming, where vampires, aliens, and she-devils race around the reels.

Be sure to play the Vampire Senpai pokie game at our top Quickspin sites.