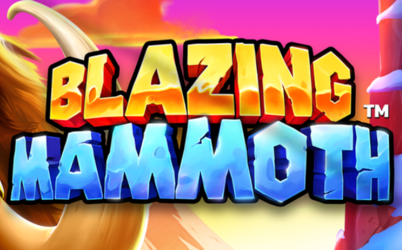 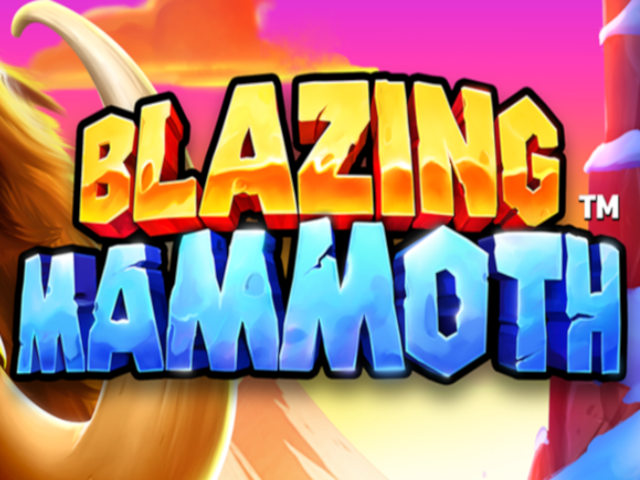 Unleash prehistoric beasts across the 5 reels and 20 lines of the Blazing Mammoth slot. This desktop and mobile game offers jumbo-sized payouts of up to 2,000x your stake, and you can trigger free spins with multipliers of up to 3x.

The Blazing Mammoth online slot is a cartoonish game that comes from the studios of Microgaming and PearFiction. You can play this low volatility slot on PCs, iOS, Android, and Windows mobiles, and there’s an average payback percentage of 96.24%.

How to Play the Blazing Mammoth Slots Game

Animated snowflakes drift down on the frozen landscape behind the Blazing Mammoth slot machine reels. This chilly setting is home to cartoon-style ice age creatures, such as a bear, sabre-tooth tiger, and wolf. Perhaps it’s the cold, but each of these beasts looks pretty annoyed, and none more so than the frowning, gold-colored wooly mammoth.

Single, double, and triple red 7s also appear, plus a golden ‘W’ wild symbol and free spins scatter icon. Despite the angry animals, this is a cheerful game with some decent animations and a lively soundtrack. It looks and sounds good on PCs and mobiles, with all of the style and features identical across all platforms.

You need to land matched symbols across any of the 20 paylines, starting from the left side. The amount won depends on your wager size, which can be set from a range of 0.20 to 120.00 on each spin. It’s easy to select a wager via a click on the button that looks like a pile of coins, while other buttons activate automatic and fast-spin modes.

The paytable is reached by tapping the ‘I’ button, and it shows you how much each symbol pays out when at least 3 or a kind land on any of the 20 paylines from the left. The wild symbol is worth the most, at 0.25x, 25x, and 125x your total wager.

If the Free Spins symbol lands in at least 3 places on the middle reels, a bonus wheel appears. You spin this wheel to reveal a number of free games that will then play out, plus a multiplier value that will apply to any wins during the feature. The possible results vary from 10 to 30 extra games, with multipliers of 2x, or 3x.

Golden mammoth symbols are key to the biggest wins in this game, with a feature that Microgaming term ‘Epic Strike.’. A prize meter sits to the side of the reels, (or above if you play on a mobile device in portrait mode.) If you land 3 or more mammoth scatter symbols in any places on the same spin, you win the corresponding scatter prize at the top New Jersey and Pennsylvania online casinos.

Three symbols are worth a payout of 1x your total wager, but values steadily increase until they max out at 2,000x for any 9 or more. You can trigger this feature from within the free games, but the multiplier doesn’t apply.

Blazing Mammoth is a low volatility game, so you should see relatively frequent winning combinations. The average returns of 96.24% are excellent for a low variance slot and mean that you can play for longer with less risk to the bankroll.

Our Rating of the Blazing Mammoth Slot

The colorful symbols and animations make the Blazing Mammoth slot machine look good on PCs and mobiles. Many players will like the low volatility, although it tends to take the edge off the excitement of higher variance slot games, where you win bigger prizes, but less often.

Extras like scatter jackpots are always popular, and by adding in a free games round with multipliers, Microgaming has ensured that players will want to revisit these prehistoric reels over and over again.

Meet the wildlife of the Ice Age at the top Microgaming casinos, with the biggest and best welcome bonus offers featured here.

What is the maximum payout of the Blazing mammoth slot?

If you land a full screen of wild symbols during a free games round with a 3x multiplier, you can win 7,500x your wager. Play the Blazing Mammoth slot machine at the maximum wager and that equals a prize of 900,000.00.

How do I win the 2,000x jackpot from the Blazing Mammoth online slot?

Does the Blazing Mammoth slot machine have a free spins round?

A Free Spin bonus symbol in at least 3 positions on the middle reels will award a free games feature. Before they begin, you spin a bonus wheel to claim between 10 and 30 extra games, and multipliers of 2x or 3x that will boost the value of any win during the round.

Can I play the Blazing Mammoth online slot on a mobile?

As long as you have a Wi-Fi or mobile network connection, the Blazing Mammoth slot machine works perfectly well on Android, iOS, and Windows smartphones and tablets. Some of the controls move around to fit the smaller screens, but otherwise it’s identical to the desktop game.

What symbols are used in the Blazing Mammoth slot?

The Blazing Mammoth slot is themed around prehistoric animals, such as bears, wolves, sabre-tooth tigers, and of course, the mammoth. These cartoonish creatures become animated when they are part of a winning combination, and other symbols include single, double and triple versions of the classic red 7 emblem.

Should I always wager the maximum in the Blazing Mammoth slot machine?

The wide wager range of the Blazing Mammoth slot runs all the way from 0.20 to 120.00 on each spin. You don’t have to wager the maximum and should only ever play with money that you can afford to lose, but the higher the stake, the greater the prizes can be.

Do I need to download the Blazing Mammoth slot?

There’s no requirement to download the Blazing Mammoth slot to play, but some casinos offer the option. Generally, however, you only need to reach the site via a desktop or mobile browser, so it won’t take up any space on your device.

How many paylines does the Blazing Mammoth slot have?

The Blazing Mammoth slot machine is a 20-payline game. Your stake is split among the 20 lines, and you win a prize whenever matched symbols land across a line, starting from the left side. The symbol will need to be on adjacent reels, although the wild can help out by acting as others if needed.

The Blazing Mammoth online slot comes from Microgaming and their development partner, PearFiction Studios. By working together, they can get more and more games out to a wider audience, which gives us players more choice.

When was the Blazing Mammoth slot released?

Microgaming launched the desktop and mobile versions of the Blazing mammoth slot machine on 30th June 2021.