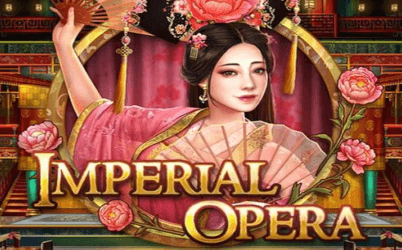 More than just a game that looks great, Imperial Opera by Play'n GO also comes pre-loaded with some exciting extra features. For better prizes in the base game, you have features that sync your reels, throw in extra wilds, create 3x3 symbols, and give you random symbol stacks. And if you want some big bonus payouts, you also have a free spins game where some of these features are guaranteed to show up and help you hit that jackpot. With prizes of up to 250,000 credits available on all devices, there will be plenty of exciting wins waiting for you in this slot, no matter what device you use.

How To Play The Imperial Opera Online Slot

Before you can start playing the Imperial Opera slot machine with real money, you’ll first need to set up your wager. Luckily, this slot offers you only one wagering control, making it really easy to set up and play. This control determines the size of your total wager and it offers you a wide wagering range, one that starts at 0.20 credits per round and goes all the way up to 100 credits.

Before you begin, you may want to press the “i” button and open the paytable to take a closer look at the game’s prizes and features. Since the payouts are always given to you in credits, they will vary depending on the size of your wager. The prizes start with the five card symbols (A-K-Q-J-10), which pay between 0.10x and 2.5x your wager per sequence. Higher wins are possible only with the four character symbols, all of which pay for 2-of-a-kind sequences and offer prizes ranging from 0.05x to 25x your stake. And thanks to the random bonuses incorporated into the base game, you’ll also get a special chance to collect jumbo versions of these icons and trigger more of the max payouts.

For mobile players, Imperial Opera by Play’n GO also comes in a more compact format that can be enjoyed on almost any iPad, iPhone, or Android device at the top mobile casinos. The mobile version of the game places the settings, wager, AutoPlay, and paytable controls inside a separate menu in your bottom-right corner while the screen features only a big spin button for easier playing.

Unlike any opera show where you have to pay to get in, this show actually pays you for attending. Every time at least two of the same symbols appear consecutively on a designated payline, starting with the first reel (far left), you’ll get to bank some of the available prizes. The most valuable symbols to collect will be the male signers of the opera, which pay 0.05x-6.25x your wager, but also the female singer, which doubles as both a wild and a paying symbol that offers prizes of up to 25x.

Once you start playing for real money, the slot will give you a hand in triggering more prizes with its four bonus features. The first feature is called Harmony and it can randomly appear to synchronize 2-3 adjacent reels in producing the same symbols. The second is called Crescendo and it can create up to 2 reels full of substituting wild symbols. The third feature, Showcase, can likewise randomly appear on any spin but it creates a stack of one randomly selected symbol (not the scatter). And the final feature, Mega Symbols, can turn all of the singer icons into 3x3 jumbo symbols.

Other symbols that can appear in a Jumbo format are the scatters, which trigger the free spins bonus game. The 3x3 scatters can only appear during the Harmony feature and each time they land fully on your reels, they will trigger a bonus of 10 free spins. For better prizes, the slot automatically syncs all of the three middle reels during every free spin you play and it also gives you access to the Showcase feature to help you trigger a full screen of the same symbols more easily.

If you like playing bonus-packed slots with big limits, and you don’t mind the volatility, this slot machine will definitely be worth your time, offering you a max jackpot of a whopping 250,000 credits. Couple this with a decent 96% RTP and you have a recipe for a top online slot game.

Proving once again its talent for designing stimulating casino games, Play’n GO has created another exciting slot machine with the Imperial Opera slot. Thanks to its random bonuses, this slot promises a good hit rate during every session, giving you payouts more often to sustain your bankroll while you’re waiting for bigger wins.

However, if you’re new to playing slots, you may instead want to look into some of Play’n GO’s less volatile games on our website. One of the most popular choices is the studio’s Golden Colts slot machine, which gives you a unique horror/western theme, 40 paylines, and seven bonus games, including one with payout multipliers of up to 30x. And for something more creative, you have the colourful Gemix slot, which is a Candy Crush-inspired game with a 7x7 screen, supercharge win multipliers, and three bonus levels you can unlock by clearing various patterns at our recommended Pennsylvania slots sites and the top New Jersey slots sites.