Play Top Gun For Free!
Bookmark It For Later 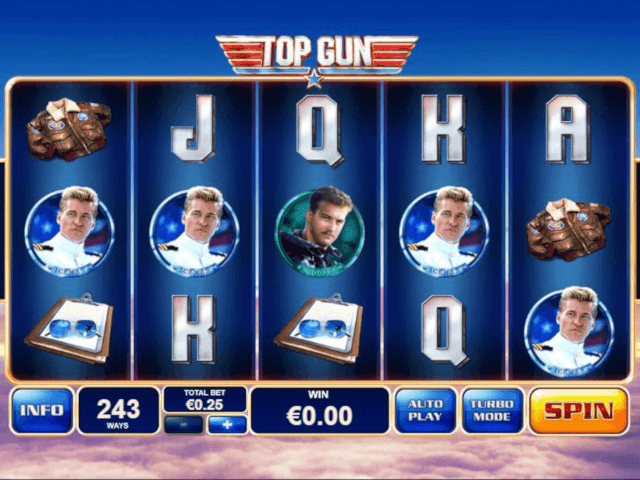 Get your leather jacket and aviator shades on because it's time to get a missile lock on the Danger Zone and collect some nice cash prizes. Based on the 1986 smash hit of the same name, the Top Gun slot is one of Playtech's most popular licensed slot machines and a medium/high-variance game with 243 ways to win that will appeal to most experienced players. Play it on top U.S. online casinos with real money on your smartphone, computer, or tablet for an immersive and fair (94.93% RTP) slot experience with prizes that can go over 500,000 credits per spin!

Just like the movie, the Top Gun slot machine will give you a wingman to cover your back and let you fire missiles, only here you might get paid more than a pilot's pay check. With hundreds of ways to win, a wild shower feature, and a free spins bonus with enhanced extras, you'll get all the chances you need to boost your bankroll with some fresh bags of coins. If you're interested in finding out more about the bonus features, prizes, and bet limits of the game, feel free to read our full review of Top Gun by Playtech.

No matter what device you want to use to play it, the Top Gun slot machine will be quite easy to enjoy. To start playing for real money, you'll have to set up only one bet control which determines the size of your total bet and the value of your coins. Since the bet is fixed at 25 coins per spin, the minimum bet is set at 0.25 credits or 0.01 credits per coin. But if you want to play like a high roller, you can also find plenty of higher bets to select between, up to a total of 125 credits per round.

What's unusual about the slot is its payout mechanics, which give you a total of 243 ways in which you can win a prize instead of the usual 20, 25, or 50. Just consider the number of win lines and some of the prizes offered by its symbols, and you'll realize how rewarding the Top Gun slot can be. While the card icons don't pay much, giving prizes between 5 and 50 coins per sequence, the picture symbols definitely pay a whole lot more. With prizes starting at 15 coins per sequence and going up to 500 and 1,000 coins, there will be plenty of juicy payouts to look forward to. If you want to take a closer look at each symbol and its payout, just press the “INFO” button on your screen.

For mobile players, Playtech offers an optimized version of the Top Gun slot machine which can be played smoothly on both iOS and Android tablets and smartphones. The controls are the same no matter whether you play on mobile or desktop, making it easier to switch between devices.

Prizes at the Top Gun academy can be earned a bit differently than with most slot machines. Instead of asking you to collect symbols on paylines, this slot will pay you every time at least three of the same symbols appear on three or more adjacent reels, regardless of their positions. But since the payouts can only be won from left to right, the first symbol of every matching sequence will need to begin at the leftmost reel to be able to trigger a prize.

Apart from the regular icons, the slot also gives you a bonus wild symbol which can substitute for every other icon from the paytable bar the scatter when there aren't enough matching symbols for a win. The wild can also pay prizes of up to 1,500 coins when not substituting for other icons. And when there aren't enough wilds on your screen, the slot can randomly create some with its Dogfight Wilds bonus feature. This feature can be activated randomly during any spin to have your wingman fly over the reels and create between 1 and 15 new wilds.

Another special symbol worth your attention is the fighter jet symbol, which here acts as the scatter symbol. Collect three fighter jets on reels one, three, and five, and you can win access to a bonus game of 8 free spins. This bonus game transports you to a new reel set where you'll be playing to the tune of Danger Zone by Kenny Loggins and enjoying enhanced Dogfight Wilds bonuses that appear more frequently and give out more wild symbols for bigger wins.

A game for all fans of one of the classic film but also those looking for some volatile action, the Top Gun slot can speak to a wide range of players, although not those who are trying out slots for the first time. Despite having 243 win lines, the Top Gun slot is a medium/high-variance game with a lowered hit rate, which makes it not suitable for those who don't like risky machines. Yet, this also means that the game can pay considerably well when it does, taking you to big prizes of over 500,000 credits!

If you're not much into high-variance slot machines, Playtech also has plenty of medium and low-volatility games you can check out at our online slots page. For another licensed slot but one that's less risky, you have the amazing Sopranos slot machine, which gives you free spins bonuses, win multipliers, and exciting side-games where you'll get to receive extra payouts from Tony Soprano himself. And for something really low variance, you have the A Night Out slot where you'll likewise enjoy free spins and nice wild payouts but also side-bets that activate special jackpots.