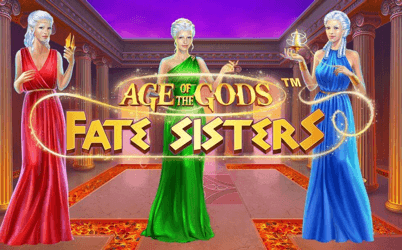 If you're a fan of epic adventures with equally epic jackpots, Playtech's Age of the Gods: Fate Sisters is the slot for you. Packed with colour, top-notch animations and, of course, plenty of ways to win, this progressive jackpot slot is capable of entertaining players at both ends of the skill spectrum!

If you're a fan of epic adventures with equally epic jackpots, the Age of the Gods: Fate Sisters online slot by Playtech is the slot for you. Packed with colour, top-notch animations and, of course, plenty of ways to win, this progressive jackpot slot is capable of entertaining players at both ends of the skill spectrum.

Fate Sisters is part of Playtech's ever-expanding Age of the Gods empire. Although each game in the series offers a slightly different angle and a few unique in-game features, the overall theme remains the same. What's more, each game in the series is interlinked to create a jackpot prizepool where you can win £100,000, regardless of the stakes you play for!

About Age of the Gods: Fate Sisters Online Slot Game

From an aesthetic perspective, Age of the Gods: Fate Sisters is as ornately decorated as you'd expect from a game with a divine name. Naturally, goddesses are the main characters and the gilded reels provide the perfect complement to the oversized special symbols and heavenly background.

Sitting and looking pretty doesn't count for much in the online slots world. Fortunately, you can bring this game to life by setting the five reels and 25 paylines in motion from as little as 0.01 per line. In real terms, this means a minimum spin will cost you just 0.25 or, depending on your bankroll, an amount worth as much as 2,500.

Once you've offered up a gift to the goddesses, the chances are you'll expect some sort of blessing. Well, if that's the case then you're in luck because prizes start when you match three or more symbols. At the bottom of the payout table you'll receive a prize worth 5x your line bet (three 9s), while the fixed jackpot will return 10,000x (five gold coins). If that wasn't enough, three or more scatters (the three sisters) on an active win line will unlock one of three bonuses:

Finally, just in case you were worried this game wasn't capable of living up to its heavenly theme, there are four progressive jackpots up for grabs. That's right, not one but four ways to win some serious cash. What's even better about these progressive jackpots is that they can strike at any time, on any spin and, most importantly, at any stakes. Basically, you could be playing at any level and you'll have a chance to win one of the four jackpots.

Anytime the goddesses decide the time is right, they'll take you to the jackpot game where you'll have to match three symbols from a 5x4 grid to win the Power, Super Power, Extra Power or Ultimate Power Jackpot worth as much as £100,000+. Put simply, when you take a turn on Age of the Gods: Fate Sisters, you have the chance to become a divine force thanks to a ton of clever features and a progressive jackpot that literally anyone can win.