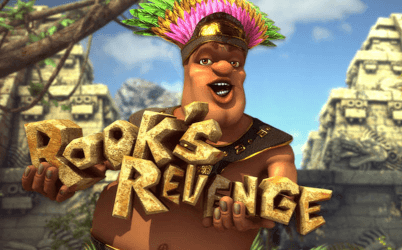 Spare some time to hang around with the most popular Aztec chief in the world and get showered with humongous stacks of fresh gold coins! With a 95% RTP and some interesting multiplier mechanics, this medium-variance slot game could yield huge rewards. Try it out at one of our recommended online slots sites or learn all you need to know about the features and prizes in our complete review below. 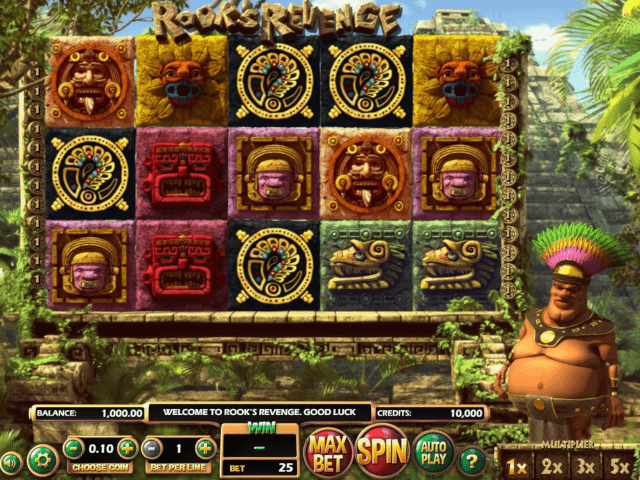 Riding on the wave of popularity of Aztec-themed casino games, Rook's Revenge by BetSoft pays homage to the ancient civilizations of Latin America with some stunning 3D graphics and symbols that can pay impressive prizes. Use any device you want to discover the right Aztec artefacts anywhere on its 25 paylines and this slot will pay you up to 2,330,000 credits for your troubles!

Similar to one of NetEnt's biggest hits, Gonzo's Quest, Rook's Revenge comes with cascading reels that explode winning symbol combinations. While playing, you'll also get to experience other bonuses like free spins games but also some whopping prize multipliers that can make huge jackpots happen with a little bit of patience.

Playing Rook's Revenge is no rocket science. Even if you are an inexperienced player, you'll have no problems enjoying this 3D slot since it only features two betting controls. Click the coin control to pick your preferred coin value and then increase or decrease your bet per line to choose the size of your prizes and the amount of money you pay for each spin. There's a wide selection of bets you can place depending on your budget, from a starting bet of 0.25 credits to a high-roller's stake of 125 credits per round.

If you want to learn how you can win money in this Betsoft game, you only need to take a look inside the paytable with the "view pays" button to see all the paylines together with the slot's symbols and their prizes. Rook's Revenge has seven Aztec-themed symbols that can pay cash and all of their prizes vary according to your bet per line. But what's great is that even with the lowest bet the payouts are still decent, offering you returns of 3-2,500 coins per sequence. However, if you increase your line bet, you can unlock more attractive prizes, ranging from 15 coins to a whopping 12,500 coins for a single sequence! Add the unique payout opportunities of the cascading reels mechanics on top of these huge prizes and you get a slot that can be exceptionally profitable when playing for real money.

Rook's Revenge also comes in a mobile-friendly package that was designed for playing on both iOS and Android mobile devices. No matter which device you use, you'll always be able to play in both manual mode as well as AutoPlay mode. However, instead of having a full range of buttons on your screen, most of your controls will be relocated to the game's menu when you go mobile.

Once you hit the spin button, keep your eyes out for any sequences of three or more identical symbols that land on a payline from left to right, because that is how you get paid in the Rook's Revenge slot. Fairly standard, one might say, but only until you consider the cascading reels feature. Namely, instead of just paying once, this slot automatically wipes out any winning symbols from the reels, letting new ones fall down from above to replace them and give you a free chance to earn one more payout. And if you ever need help with the first win or any other, you also have a bonus wild symbol that appears on reels two-five.

Moreover, not only do the cascading reels add new symbols to the screen but they also trigger win multipliers that can significantly boost your profits when playing at a real money casino. During the base game, connecting two, three, or more wins in a row will increase the game's multiplier meter by 2x, 3x, and 5x, respectively, allowing you to earn free prizes that are boosted by up to five times. And if you enter the free spins round, these multipliers will be even bigger, starting at 3x for a first win and going up to a very attractive 15x for the fourth consecutive payout. However, in order to trigger the free spins, you'll first need to collect three golden mask symbols on an active payline and reels one, two, and three.

In short, Rook's Revenge is a product for fans of modern slots and Aztec-themed pokies who want a game that can pay really good money. The similarity with NetEnt's Gonzo's Quest is striking, except that Rook's Revenge is a medium-variance game, so if you liked that slot machine there's a high chance you'll like this one as well. The main benefits this game offers are its huge win multipliers and prizes which can be combined to win a massive jackpot of 2,330,000 credits anytime you play for real cash. Still, with the high hit ratio of the slot, we suspect that such a humongous prize will be a rare exception as opposed to the smaller but steadier wins.

Alternatively, if you prefer playing pokies that are more volatile with their payouts, there are plenty of enticing high-variance slots online you'll find more to your liking. Gonzo's Quest itself is a high-volatility slot machine that's basically identical to Rook's Revenge and it also comes in VR mode that you can enjoy with special goggles. There are also volatile games like BetSoft's Blood Eternal slot machine, which offers a chilling vampire-themed presentation, multiple bonuses, and a jackpot of up to 965,620 coins. And if either game doesn't suit your taste, you can also browse around at some of our top online casinos to find dozens of other slots you can play for real cash.