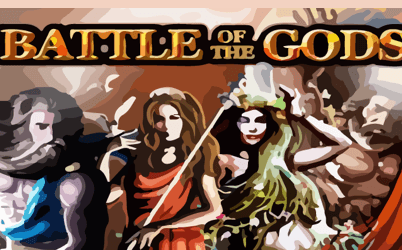 Game Provider: Playtech
Play Battle of the Gods For Free!
Bookmark It For Later
Demo Not Available, Use The Offer Below To
Play for Real Money Now!
Showing , United States
EDIT LOCATION
locale:
Loading...

Battle of the Gods Review

Enter Playtech’s epic Battle of the Gods slot at top New Jersey casino sites and top Pennsylvania casino sites and see if you’ll find favor with the Olympians or incur their mighty wrath. Inspired by the cosmic battle between the gods led by Zeus and the power hungry Titans, you'll be blown away by bonus features as you take a trip through Greek mythology.

Touting the traditional 5-reel, 25-payline layout, this slot game is choke full of bonus symbols representing all the popular Greek gods. Littered throughout the gameplay alongside the gods are wild, multiplier and scatter bonuses to ensure you, not the top New Jersey slots sites, take home more than just your pride but a pocket full of cash as well.

About Battle of the Gods Slot Game