Shergar: The Complete Story of The Abducted Race Horse

On February 1, 1983, TV-am launched on British TV screens. It was a fortnight behind the BBC’s ground-breaking Breakfast Time and the public had already shown themselves to be unsure about watching a news programme whilst eating their Cornflakes.

During those early days it looked like there was not enough interest to justify one televised breakfast show, let alone two.

To their rescue came Shergar, not the arrival of the wonder horse who landed The Derby by a record 10 lengths, but his disappearance. His abduction on the evening of February 8, 1983, became a massive news story and the mystery surrounding his apparent kidnapping had the British and Irish public spellbound.

Horse racing fans and the rest of the public in general were eager to know if there had been any significant overnight developments in the search for the equine superstar.

Of course, the early 80s were bleak times. In both the UK and Ireland unemployment was at a record high. The Irish were emigrating in their droves – 475,000 people would leave the country between 1983 and 1993 – an amazing number considering the Republic’s total population was 3.3 million in 1980.

The English had fought the Argentinians over the Falkland Islands a year earlier and they were slowly winning the battle on inflation which peaked at 22 per cent in 1980. But with the IRA (Irish Republican Army) and INLA (Irish National Liberation Army) bombing the country on a regular basis, tuning into the news was normally bleak and depressing. 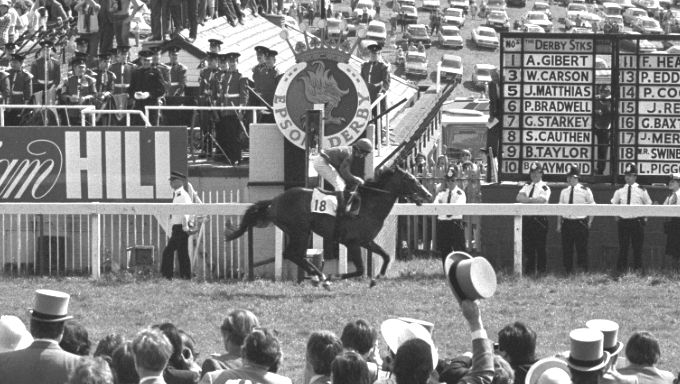 In June 1982 ‘victory’ in the Falklands was cause for rare upbeat ‘happy headlines’ but less than six weeks later bad news retuned. July 20, 1982 was a particularly dark day when two bombs, detonated by the IRA during British military ceremonies in Hyde Park and Regent's Park in Central London, accounted for 11 lives and injured 50 others.

Globally, this would normally be viewed as just another ‘act of terrorism’ on UK soil which was almost considered routine at this point in time and something even the British public had become accustomed to.

But the sight of seven horses lying dead in pools of blood outraged the viewing audience and galvanised opinion against those responsible. One seriously injured horse, Sefton, became a star subsequently featuring on countless television programmes and was eventually awarded the ‘Horse of the Year’ accolade. Ironically, he had been born and bred in Ireland.

Killing military personnel and civilians was one thing, but after £620,000 in donations and thousands of get-well cards were received by the horse, who underwent eight hours of surgery, the message should have been crystal clear: never mess with people’s affinity and empathy for animals.

Sadly, the IRA never got the memo, although they probably had no idea what a media circus the kidnapping of Shergar would become.

At this point it must be pointed out that Shergar’s kidnapping was a news story unlike any other. Wars happen, riots happen, bombs go off and planes crash but only Nick Leeson who left a note reading “I'm sorry” on his Barings Bank desk and vanished leaving £820 million in losses behind him in 1995 and the heart-breaking disappearance of Madeleine McCann in 2007 come close to Shergar.

The public’s yearning to know what happened to Shergar in the aftermath of his abduction was remarkable. The truth is, after almost 40 years, we still do not fully know. However, a general version of events has been agreed upon by expert researchers and, gradually, as the years have ticked by it has been accepted as fact.

It maps out a clear structure of those responsible for taking the horse, their intentions and the eventual fate of the dual Derby winner. We will come to that later. 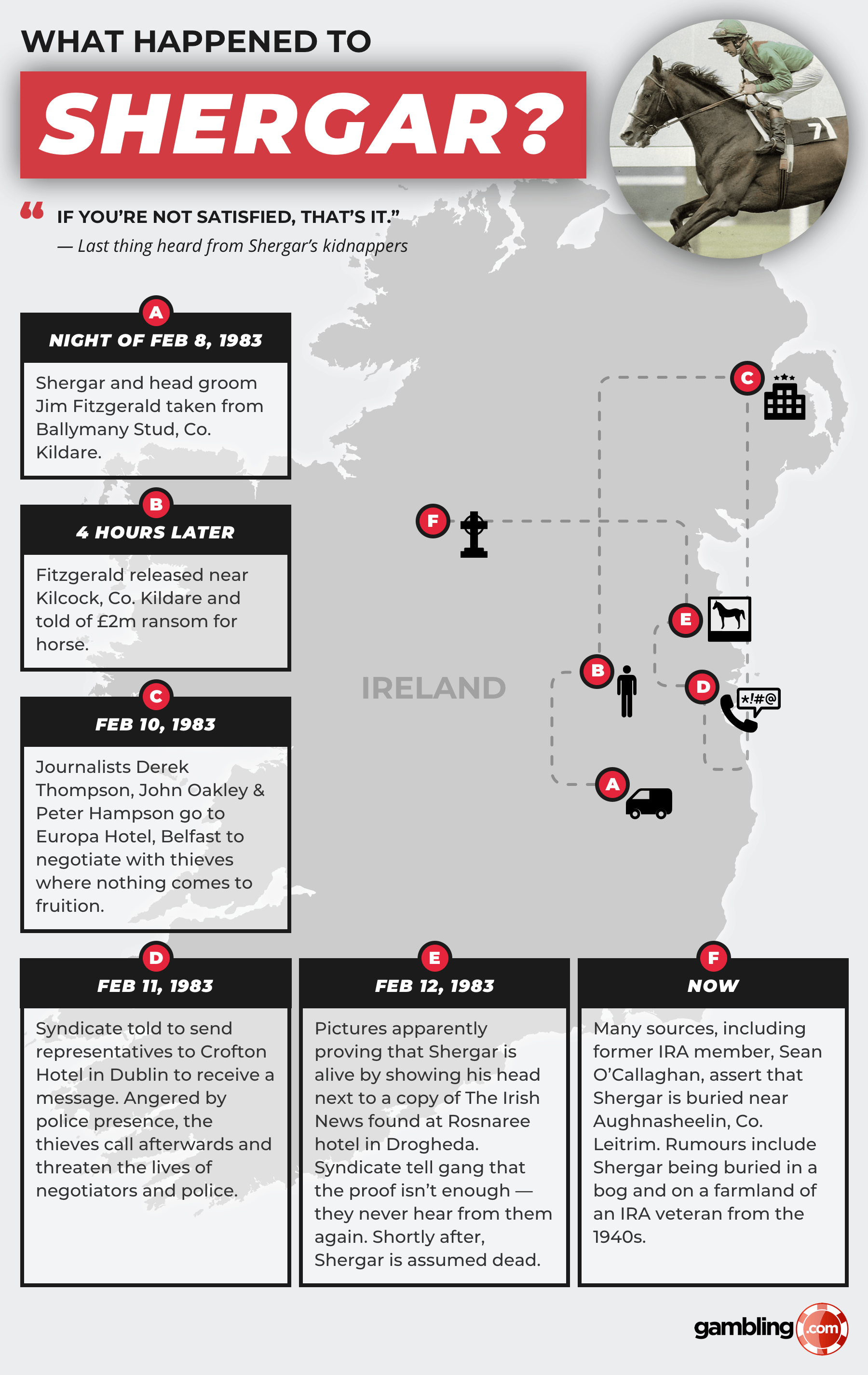 But just why was this story so big? Firstly, Shergar per se was massive. The Derby was still run on a Wednesday and you could barely see a blade of grass on the Epsom Downs for people, bookmakers and double-decker busses back in 1981.

Nowadays, if the domestic TV viewing audience approaches two million there is euphoria. Back then, despite the mid-week timeslot, three times more people watched the race live. Indeed, it’s a little-known fact the 1931 Derby played host to the first remote outside television broadcast in the world.

In the early 1980’s, by the time he was packed off to stud, as many people knew Shergar as knew songs by Duran Duran, Culture Club or Wham.

Secondly, Shergar was a champion at a time when the public needed one, a Phar Lap of Australian racing or an American version of Seabiscuit. Both those horses offered a welcome distraction to financial hardship during the Great Depression. In the early 80’s the UK and Ireland were wallowing in serious hardship.

For the record, Shergar’s other victories included the Chester Vase, the King George VI and Queen Elizabeth Stakes at Ascot and the Irish Sweeps Derby. The latter victory, another facile success, added sand to the cement which was Shergar’s ‘Irish bred’ status making him a rock-solid favourite with the Irish public.

In fact, when Shergar retired and was destined for the Ballymany Stud shortly after his famous Curragh victory, it was described as a ‘homecoming’. Huge tax breaks made Ireland the go-to place for owners of stallions at this time but the public took national pride in this great Irish-bred champion standing in County Kildare and the TV news cameras were at Dublin Airport to cover his arrival.

Who knows if his abductors were watching RTE television that day but according to Sean O’Callaghan, a former senior member of the IRA, his organisation believed kidnapping the horse was a convenient operation to raise some serious money for arms purchases.

It is unlikely the kidnappers considered the media frenzy that was about to happen. The IRA had been quietly and successfully topping up their coffers through kidnappings for years.

The Not-So-Easy Pay Off

Shergar was owned by His Highness Aga Khan, one of the richest men in the world and spiritual leader to 15 million Shia Imami Ismaili Muslims. Surely if anyone was going to pay up fast it was this guy? Wrong.

The kidnappers may not have been aware at the time, but Shergar now had multiple owners as he had been syndicated for £10 million (£250,000 for each one of forty shares) on his retirement from the racecourse.

HH Aga Khan kept just six shares for himself and the others were sold individually to bloodstock interests from nine different countries. As was commonplace at the time, every shareholder had the option each covering season to nominate a mare to be covered or of selling that option on. Technically, Shergar’s stud fee was around £60,000–£80,000 per-cover. 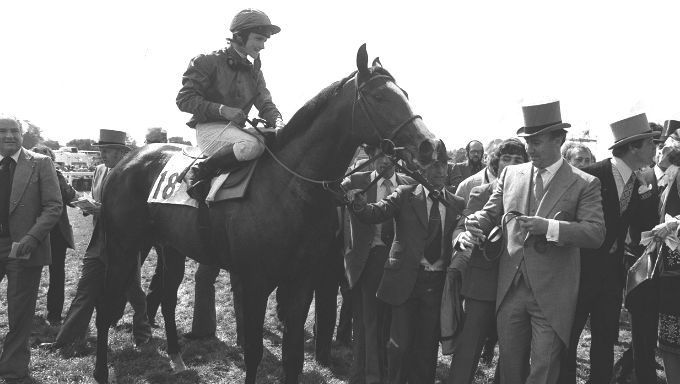 With authorisation needed from over 30 shareholders an agreement to negotiate with kidnappers was never likely to happen quickly and four days of phone calls between HH Aga Khan’s office in Paris and an individual using the code-name King Neptune ensued.

The ransom fee was Ir£2 million but before its payment was even considered proof the horse was alive was asked for. A Polaroid picture was delivered to a Dublin hotel and while it unquestionably showed Shergar and a Belfast newspaper headline from the previous day, the close-up head-shot did not verify if the horse was alive or dead.

With negotiations at a standstill, and when being asked for further proof of Shergar’s wellbeing, King Neptune never called the Aga Khan for a fifth time and no more was ever heard of Shergar’s abductors. The trail went cold pretty quickly thereafter.

The media, with two nations of Shergar-news-hungry viewers and readers to entertain, continued to have a field day for weeks and months. Chief Superintendent James Murphy and his press conferences became a favourite with them thanks to his strong Irish brogue, trilby hat and dry wit.

He once exclaimed “A clue? That is something we haven’t got”, he also explained how “diviners, clairvoyants and psychics” had offered to help with the case. These quotes later conspired to him being described as ‘the most richly comic copper since Inspector Clouseau’.

And while even the remains of the equine equivalent of Lord Lucan have never been found, even now the story refuses to go away. Many films and documentaries have been made to recount Shergar’s career and mysterious disappearance, but mystery still surrounds his whereabouts.

In 2000, there was another media-frenzy when a skull of a horse was found in County Kerry. Speculation spread like wildfire but no sooner had the TV cameras set up outside the Irish Equine Centre the scientists within declared it was not the fabled horse as the skull clearly belonged to a deceased two-year-old as it featured only short molars.

2023 will mark the 40th anniversary of Shergar’s disappearance when yet more conjecture will be made. But the theory Shergar was injured shortly after his abduction in his horse box and suffered his demise within days, if not hours, of his theft is unlikely to be bettered. It is also believed he is buried in or around Ballinamore, County Leitrim, on the northern-southern border.

Shergar vanished when just one of his first season foals had been born. He was days away from beginning on his second book of mares. Eventually, he sired 37 foals (35 lived), amongst those was Authaal, who was bought as a yearling by Sheikh Mohammed for £3.1 million guineas and went on to win the Irish St Leger plus the Queen Elizabeth Stakes and Underwood Stakes in Australia.

Maysoon, trained like Shergar by Michael Stoute, won the Fred Darling Stakes and was placed in the 1,000 Guineas and Oaks making her Shergar’s next best offspring, although she never bred a winner on the flat or over jumps and it is hard to find Shergar in the pedigree of any of today’s equine performers.

What happened to Shergar?

Shergar was kidnapped from a stud farm in Ireland on February 8th, 1983. He was the pride an joy of the Aga Khan, the Imām of the Nizari Ismāʿīli Shias and was one of the best winners of an Epsom Derby of the 20th century. His whereabouts remain unknown to this day and who was ultimately responsible is also a mystery, although many believe the IRA took the horse and disposed of him soon after when their plan to claim a handsome ransom went wrong.

It is widely believed that the IRA killed the most famous and valuable race horse in the world at the time when the multiple group 1 winning Shergar disappeared in 1983 following a raid on a stud farm in Ireland, carried out by a group of men in balaclavas. Owned by a billionaire, the plot fell apart when no ransom was paid and the horse is still missing.

What was Shergar worth?

At the time of Shergar's disappearance the colt was widely considered the most valuable horse on the planet with a value of between £10m and £15m and would have been a huge earner at stud for breeding future champions. His stud career was cut short following his kidnapping in 1983 and he only sired 35 foals before that fateful evening.

Did Shergar sire any future champions?

As a sire Shergar was very likely to have been a huge success and from the 35 foals he sired before being kidnapped in 1983 Authaal was arguably the best of them, winning an Irish St Leger, whilst another son of Shergar, Maysoon, won a Fred Darling Stakes and placed in two English classics, the Oaks and 1,000 Guineas.

Where is Shergar now?

The most widely believed answer is that Shergar is buried somewhere in County Leitrim, Ireland. There are suggestions that he may be part of the bog land on a farm, but the actual resting place for Shergar will likely never be disclosed.