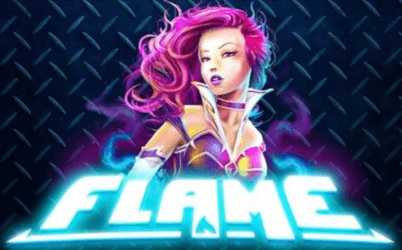 Become the master of fire in NextGen's Flame slot and learn how to tame the power of flames and get yourself some bags of fresh coins. Released in 2018, the Flame online pokie is a modern mobile-optimized casino game featuring a ton of bonuses and 20 fixed paylines, given to you for the price of 15. With an RTP of 96.610%, a medium-high variance gameplay, and prizes amounting to 150,000 coins per spin, this is one slot that can not only keep you entertained but it can also pay you quite well any time you play with real money.

Play Flame For Free!
Bookmark It For Later 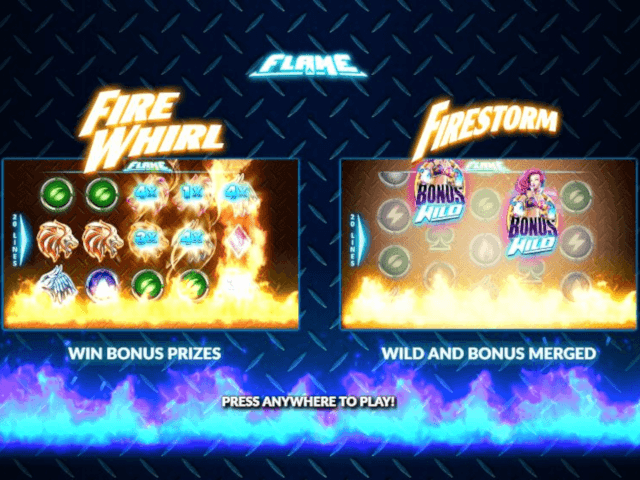 Play Free Demo
Version Directly in Your Browser
Play Flame For Free!
Bookmark It For Later

Full of thematic bonuses, the best thing about playing this pokie isn’t its immersive gameplay but its extra features. Other than a free spins bonus, Flame by NextGen also comes with seven different random features that can be triggered at any point to give you a variety of extras, ranging from both-way prizes and guaranteed wilds to big win multipliers, symbol upgrades, and more. Read all about them in our full breakdown below and prepare to scorch some symbols to get paid.

As one of the studio’s newer games, the Flame online slot features intuitive on-screen controls that make playing easy. What’s unique about the game is that it gives you a total of 20 paylines per spin but charges you only for 15. So, with the lowest coin size of 0.01 credits, you’ll get to spend only 0.15 credits for each round you play. You can also choose bigger bets with the controls next to your spin button, up to a total of 75 credits per round (5 credits per coin).

After you choose a stake, just press the spin control and you’ll get up to 13 symbols on your screen which you can collect to win some prizes. All prizes are awarded in coins and can be seen during any round by accessing the paytable (“i” button) from the game’s menu and bonus details. The symbols are split into three groups, two of which have the same prizes for each symbol. The payouts start with the four card suit icons, which pay 5-20 coins per sequence, and they continue with the element symbols, which pay 10-50 coins, and end with the animal symbols, which have different prizes ranging from 20 to 750 coins. These prizes can also be boosted up to 10x once some of the special features kick in.

Since it’s a modern slot machine, the Flame online pokie is also available for playing with real money on any mobile device. Whether you like to play on your Android smartphone/tablet or want to enjoy the game on your iPhone or iPad, you can do so easily thanks to the smart on-screen controls.

Like most slots online, Flame by NextGen will pay you for every sequence of three, four, or five of the same symbols that are collected on a payline, in a left-to-right direction. For the biggest wins, stay on the lookout for the eagle, wolf, and lion symbols, which can give you up to 150, 250, and 750 coins from every five-of-a-kind sequence you collect, respectively. You’ll also want to keep an eye on the fire princess, which is turned into a paying wild symbol in this game, substituting for all base symbols and giving you prizes of 75 coins.

Another special icon you’ll get to see frequently is the bonus scatter symbol, which is your ticket for the free spins game. Three of the symbols collected anywhere on the screen will get you a bonus of 15 free spins which can also be retriggered in the same way once the feature starts. But what’s really interesting is that during the free spins, the pokie's seven random bonuses will appear more frequently than during the base game. Since one of these features can help you turn your wilds into scatter symbols, you’ll have an easier shot at retriggering the bonus.

The seven special features can be activated randomly on any spin while you play with real money. The first feature (Cross-Flare) activates both-ways mechanics, allowing you to win prizes in two directions. The second feature (Flare Up) can multiply your prizes by 2x-10x. The third feature (Fire Whirl) will instead pay you a bonus prize of 1-20x your bet (15-300) coins for each animal symbol that appears. The fourth feature (Live Embers) will transform all card symbols into wilds. The fifth bonus, on the other hand, (Spontaneous Combustion) will turn all element symbols into animal symbols. The sixth feature (Wild Inferno) will get you respins with stacks of wilds. And the last feature (Firestorm) will turn your wild symbols into combined wild/scatter symbols.

Even though it’s a bit riskier (medium-high variance), the Flame online slot can be a very attractive choice. Immersive, affordable, and filled with a whole range of exciting bonuses, this game is a match for any experienced players looking for an ultra-modern and rewarding slot experience. If you have the patience and bankroll to chase after memorable prizes, the Flame slot will give you a chance to win up to 150,000 coins with a single bet. The hit rate is certainly not that high to suggest that big wins aren’t possible.

For players who prefer their slots to be more balanced with their payouts, NextGen also makes some very enticing medium-variance machines that can be explored freely on our website. We suggest the Foxin’ Wins slot machine, one of the studio’s most popular games, which offers you a chance to pay for extra wilds but also enjoy bonuses like free spins with doubled prizes and several instant-win features. You can also check out the Easy Slider slot, which features a unique slider tool that lets you choose the location and value of your wild multiplier symbols.

Check out the Flame online pokie at one of our top online pokie sites, where welcome bonuses can also be found!