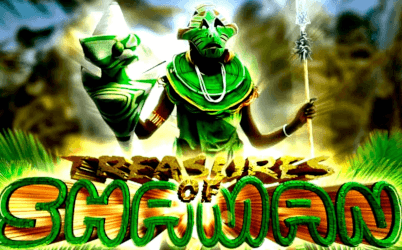 Designed by Fugaso, Treasure of Shaman brings 5 reels and 20 fixed paylines of tribal symbolism to the world of online casinos that are seasoned with lucrative bonus features and prizes. Its medium variance and 95.98% RTP should ensure a consistent gaming experience. Play the game for real money on any device you want, laptop, mobile, or tablet, and you can bank payouts of up to 100,000 coins per sequence! See what the pokie has in store or read our full review to get all the details you need before playing for real cash.

Play Treasure Of Shaman For Free! 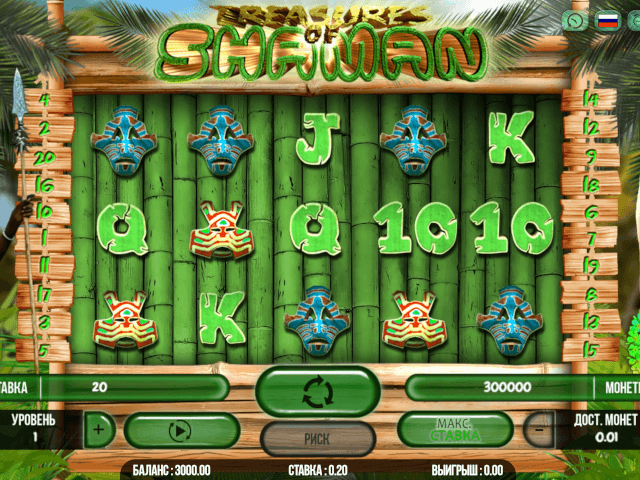 If you’ve ever dreamed about exploring the tropical Amazon rainforest, you now have a chance to do so and win money straight from the comfort of your home with the new Treasure of Shaman pokie game. With its top prizes alone, Treasure of Shaman has more than enough to attract most punters to try out the game. But when you add the extra free spins, win multipliers, click-me bonuses, and double-or-nothing games, this Fugaso pokie becomes even harder to ignore.

How does the Treasure of Shaman pokie play?

You don’t necessarily need prior experience in playing pokies to enjoy Treasure of Shaman because this casino game can be easily played even by novice punters. Before you start spinning away, you will only need to use the bet controls on both sides of the screen to select your coin value and choose how many coins per payline you want to spend. The smallest wager you can place is only 0.20 credits while the maximum stake is a whopping 200 credits at our recommended online casino sites.

There are 20 win lines that can trigger prizes and you can see each of them by pressing the numbers sitting next to the reels. You can win money by collecting ten different symbols, some of which can also trigger special bonus features. Play with only one coin on a payline at any real money casino and you can enjoy payouts ranging from 5 coins to up to 10,000 coins per sequence. But if you play with all ten coins, those prizes will increase tenfold, giving you a shot at hitting wins of up to 100,000 coins! And what’s even more interesting is that the pokie gives you a unique chance to double up any prize you collect with a special gamble function – something you don’t get with many other pokies machines online.

When playing on a phone, the experience is not that different from when you use a computer to play. Most of Fugaso’s pokie machines were built to work smoothly on any iOS or Android mobile device and Treasure of Shaman is no exception. A touch-sensitive spin control lets you play out your rounds while on the move while a dedicated Autoplay feature allows you to take a break and have the pokie play out a sequence of rounds for you.

To win some money on Treasure Shaman, you will need to form sequences of two or more identical symbols on a payline, starting at the leftmost reel. There are only two symbols that pay for a two-a-kind combination and they offer the best prizes in the game. The most valuable symbol of them all is the wild symbol as it can substitute for all but the bonus symbols to complete your sequences and get you paid. And when it’s not substituting, this symbol can pay up to 10,000 coins, and that’s only when you’re betting a single coin per line.

Another bonus symbol you can collect is the shaman scatter. This symbol can pay up to 5,000 coins, regardless of its location, but also trigger a free spins bonus. When you collect at least three scatters on your screen, the pokie will award you with 12 free spins, each of which will be played with a payout multiplier of 3x. And the best part is that the free spins can be retriggered again during the bonus feature for an indefinite number of times.

And the last special symbol is your bonus symbol and it triggers a multi-level pick-and-win feature. When three of the symbols are collected on a payline, the pokie only triggers the bonus game. But when you collect four or five bonus symbols, you can also win multipliers for your bonus prizes of 5x and 27x, respectively. Play the first stage of the game to collect some instant cash payouts but progress to the second stage and you can win an additional payout multiplier for a chance to win up to 14,175 coins when playing with real money.

Maximum Win, RTP and Volatility for the Treasure of Shaman pokie

This mobile-friendly pokie machine is packed with bonuses and can pay prizes up to 100,000 coins per sequence when played for real cash at the online mobile casinos, depending on your bet level. Still, you shouldn’t expect to see colossal payouts so easily while playing because, after all, the pokie still retains a high hit rate. The medium volatility and 95.98% RTP should mean the spins are more consistent than you'll find in other online pokies.

Treasure of Shaman by Fugaso was built to attract a wide range of players thanks to its simple bonus features, medium-variance gameplay, and broad betting limits. If you’re looking for pokies that can pay good prizes without too much risk at the top-ranked online casinos, Treasure of Shaman will answer your needs.

On the other hand, if you can take the risk for a chance of hitting huge prizes, Fugaso also has a few high-variance games that you might want to look into. Revenge of Cyborgs is one of the studio’s most immersive pokie machines that offer riskier gameplay but also a variety of bonus features. The Mummy 2018 and the Carousel are also popular choices and so is the Crazy Bot pokie. Make sure to check out our pokies page for even more popular Fugaso pokies you can play for free but also plenty of other top games from other software providers.