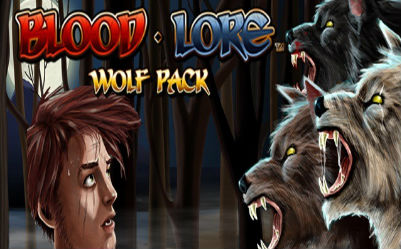 NextGen’s Blood Lore Wolf Pack slot is a great game based on the ageless and deadly rivalry that was the focal point of many Hollywood movies including the major (teenage) hit Twilight. You’re thrown right in the middle of the neverending between a vampire clan and a bloodthirsty wolf pack called Blood Lore clan. A 20-payline slot with medium to high volatility and an industry-standard RTP, Blood Lore Wolf Pack is a great game for beginners thanks to the wide range of betting options.

The Blood Lore Wolf Pack slot by NextGen gives you a chance to potentially win up to 400,000 coins on a single spin on your mobile and desktop devices. It’s a pretty simple slot in visual terms, but don’t let that fool you. Blood Lore Wolf Pack offers exciting and scary action with a re-spin feature that can be quite lucrative if you’re lucky. Pick a side in this exciting horror slot at top real money sites and it should satisfy your hunger.

The Blood Lore Wolf Pack online video slot offers 20 paylines which you can adjust to your preferences. Playable 1p to £4 per spin, you can spin the reels for a total bet that reaches all the way up to £80. If you’re not that of a high roller, you can easily lower the bet size and the number of lines to your liking. Of course, if you want to hit a max win, you’ll need to max out your bets as well.

Visually, the slot looks nothing like all the current modern 3D slots. Not that it looks bad – in fact, the graphics and animations fit nicely with the theme. You’ll find common card suit symbols on the reels as well as symbols that fit right in with the whole werewolf-vampire lore – holy water, crucifixes, and the wolf pack itself. All wins occur on selected paylines except scattered wins that include the Moon symbol. If you were wondering if there’s a wolfman somewhere in the game, there is, and it acts as the game’s wild. Appearing on reels 2 and 4 only, the wild substitutes for all symbols including the scatter – that’s a new one.

The base game offers pretty solid prizes. Land 5 wolf pack symbols on a payline to win 5,000 coins. As a member of the vampire clan, you can track the wolf pack by following the dead deer remains (yuck!). Five of these symbols on a payline will give you 1,000 coins. Moonlight helps the Wolfman transform to a werewolf in movies, but in this game, scattered Moons can give you a prize worth 100x of your bet if you manage to land five of them. If those prizes don’t look great to you, wait until you get to the bonus round.

In terms of bonus features, the Blood Lore Wolf Pack slot is a bit lacking. With that being said, you still get a re-spin feature which should be enough to satisfy yours and the wolf pack’s hunger. The bonus is triggered when two Wolfman symbols appear together on reels 2 and 4. At that point, the reels will expand and stay in place while the other reels are spun together not one, but five times. Thanks to the two fully wild reels, you can expect prizes to rain in this bonus feature. Although we would have liked to see a bonus round with a cool animation of a fight between the two clans, the re-spin feature offers bold prizes that can give your bank account a boost.

Win big during the re-spins round and you can double it thanks to the gamble feature. A frequent addition to many online slots, the gamble feature gives you a chance to double or quadruple your wins by picking a card suit or color. Of course, you can also lose it all in a second if you guess wrong, so we’d stay away from it or try our luck with smaller wins. If you manage to land a big win, you should certainly not throw it away that easily.

A simple game in terms of layout and design, the Blood Lore Wolf Pack slot by NextGen offers plenty of action for newcomers and high rollers. It’s another decent outing by the famous game studio. With a unique atmosphere that puts you right into the action in the neverending rivalry between the two clans, it’s a supernatural slot like no other. The graphics, sounds, and background will appeal to horror fans just like the symbols. The image of half-eaten dead deer may be too much for some slot fans, but it surely fits in nicely with the theme.

Blood Lore Wolf Pack is not the richest slot out there, but it can still pay out solid wins. A medium-to-high volatility game, you can expect to land a big win from time to time. If you’re a newcomer, we suggest keeping your bets small and playing fewer lines until you’re ready to splash the cash. Of course, you’ll have to max your bets out if you want to hit the 400,000 coin major prize.

The battle between werewolves and vampires is as old as time itself. It is nicely executed in this solid NextGen slot, which, although simple visually, offers solid action. With werewolves on the loose, a spooky atmosphere, and satisfying prizes, Blood Lore Wolf Pack is a slot worth giving a shot at one of our recommended top New Jersey slot sites or top Pennsylvania slots sites. Just don’t use silver bullets on it.