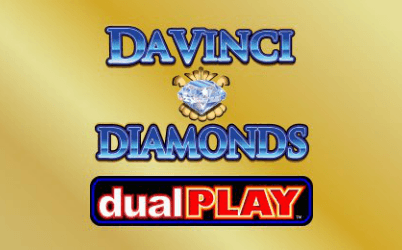 It’s said that diamonds are a girl’s best friend. But it doesn’t matter what sex you are, as the Da Vinci Diamonds Dual Play slot machine could is a great friend to anyone playing at online or mobile casinos that carry games from IGT.

If you have ever played a slot machine, chances are that you will be familiar with the original Da Vinci Diamonds games, as it’s one of the most popular in the world. But get ready for a new level of thrills, as this version stacks two sets of reels on the screen to double the odds of a winning spin.

If you have never heard of the Da Vinci Diamonds slot game, here’s an introduction. Colorful gems and paintings from the Italian master will appear across the screen, with any symbols that make up a winning combination disappearing, which can lead to new win-lines being made.

A wild symbol can replace any other if it means that you get another win, plus there’s a free spins feature which can get retriggered several times over. Always looking for new ways to thrill the players, IGT have decided to double the excitement. By having two sets of stacked reels, Da Vinci Diamonds Dual Play gives you twice the chances to claim a win in any spin.

With payouts that can reach a staggering 250,000 in a single spin, and with mobile compatibility that means you can play across iOS, Android and Windows-powered devices, it’s easy to see why the Da Vinci Diamonds Dual Play slot machine has become so popular. Read on for an in-depth look at this classic slot game and check it out at top New Jersey casino sites and top Pennsylvania casino sites.

You’ll be playing 40 paylines in this game, which equals a minimum wager of 0.40 per spin. There’s the option to raise stakes to a maximum of 200.00, so whatever your budget is, there’s likely to be a bet level that matches it.

IGT have been in the casino games business long enough to know that players don’t want to spend time trying to understand the control buttons, so always make their games as easy to play as possible. The controls are just as easy to use on your iPhone, iPad or Android device as they are on desktop platforms.

Apart from deciding how much to bet on each spin, you can also choose to set the reels spinning on their own for up to 50 times. If you like the traditional bells and beeps that classic fruit machines often use, you may like the soundtrack that accompanies the Da Vinci Diamonds Dual Play slot. If you prefer more sophisticated tunes playing along, then you’re out of luck here and may want to just mute the volume.

However, it’s the gameplay that really matters, not how it sounds, and there’s little that we can find wrong with how this slot machine works. Click the paytable button above the reels to see what you win each time 3 or more matching symbols land across a line, and to find out how the unusual bonuses, such as the stacked reels and extra paylines in the free spins will work.

Anyone who has played the original version will be very familiar with the Dual Play slot machine, as it uses exactly the same symbols. Three colourful jewels and three of Leonardo Da Vinci’s most famous works, plus the game logo, are the only standard symbols, with his most famous painting, the Mona Lisa returning 1,000x the line stake when landing right across a payline. The Da Vinci Diamonds logo symbol is worth even more, with 5,000x your line bet to collect when it’s seen on all five reels.

You will also see a wild symbol, that can act as any of those listed above if it’s then able to complete a combination. The Da Vinci Diamonds Dual Play slot game uses a Tumbling Reels feature which can lead to several wins for a single stake when winning symbols vanish and new ones drop into their places. A special Tumble Thru format has symbols from the top set of reels falling right down to the lower set which doubles the odds of new winning lines being made.

This slot machine also treats you to extra paylines during a free spins feature, for even more winning chances. If the scatter symbol is seen in any three or more places at once, you trigger six free spins, with 60 lines running across the game, not just 40. In theory, this should lead to lots more wins during the bonus round and as they can be retriggered several times over by more scatters, you could get plenty more free games added on to the original six.

Our Summary of the Da Vinci Diamonds Dual Play Slot

Don’t expect sophisticated 3D graphics or stunning animations from this game as it comes with a relatively simple deign. But take one look at the gameplay and few people are going to be worried about this in the slightest.

The way that winning symbols vanish to be replaced by new ones is a great feature that should boost your win rate by some margin and with wild substitutions plus free spins, this is a low volatility slot that’s become a huge success at IGT-powered online casinos.

Check it out at the top slots sites in New Jersey and Pennsylvania, and while you’re there, try out the original version of the game, which is probably better suited to inexperienced players who want straightforward features.