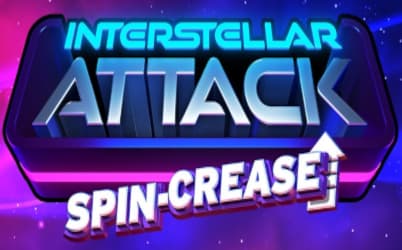 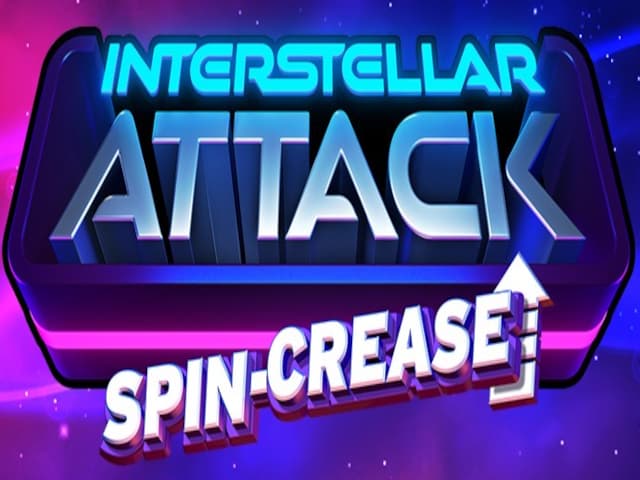 High 5 Games has a new game, called Interstellar Attack, that will take you down memory lane, with its arcade-style gameplay. It is a slot with an obvious space theme, filled with asteroids, aliens and spaceships, taking you to stellar wins.

The slot is based on a 5x5 grid, plus one special reel, offering 25 paylines, where you’ll need to shoot down aliens and asteroids in order to receive crystals and trigger additional bonuses. In terms of gameplay, you have the Spin-Crease and the Free Spins bonus games, as well as Power-Ups, to add to the excitement. Ready to go through our Interstellar Attack review? Let’s do it!

How to Play Interstellar Attack Slot

If you’ve ever played a game by High 5 Games, you know that in the past, these games were Flash titles, but today, they are all HTML5 titles, playable across all devices. The moment you load the slot, you will see the Spin-Crease meter on the left of the grid, the grid in the center of the screen, and the Power-Up meter and the control buttons on the right.

First, you see the + button. Clicking or tapping on it, a pop-up appears giving you the Homepage, Speaker button where you can adjust the sounds of the game, and the “i” button, where the paytable is. Go to the paytable, and you’ll see that it is not your usual paytable, displaying the symbols and their payouts. Here, you learn more about the symbol upgrades, and the symbols necessary to accumulate to trigger the bonus features. These symbols are multicolored asteroids and aliens, which give you payouts of 0.5x to 100x the stake, depending on where they land. The telescope is the Scatter.

Next, you see the Play and Autoplay button, and below the reels, you see the Balance and Win displays, followed by the Bet Configuration field. You can place wagers from 0.20 to 40 credits at the best Pennsylvania and the best New Jersey slots sites.

High 5 Games slots are all but simple to play, as you may have noticed, and Interstellar Attack is no exception. The game is packed with features and rules, so we’ll try to lead you through them all.

We said that the grid is 5x5, but there’s one extra special reel added as well. This is the last reel, where the spaceships appear. When a spaceship lands on the reel, it shoots for asteroids. These asteroids are accumulated in the Power-Up meter. When enough spaceships appear in the Spin-Crease meter, they upgrade the crystal symbols on the grid and give you a corresponding payout. When the Power-Up meter is full, you shoot the row bomb to explode every symbol on that row, you get a diverter or a 10x Multiplier.

In the meantime, the Scatter may appear floating above the five reels. If you manage to shoot it during the base game, you’ll trigger the Interstellar Attack bonus game. You will get 10 Free Spins, during which you won’t be collecting green crystals in the Spin-Crease meter, but Power-Up symbols will be placed at random on the reels. The Free Spins arrive in six levels, each arriving with its special payout.

Interstellar Attack is a medium volatile game, with a rather low default RTP of 94.00%, which can increase up to 97.20%, as stated by the developer.

The max win potential is not known really, since the developer has not stated it, but when you start playing the game you realize that it has huge potential. Huge wins land when you least expect them, due to the interactive gameplay, so make sure you give it a try.

There’s no doubt that arcade-style slots fans would greatly enjoy playing Interstellar Attack, as this is a slot that will definitely take them down the memory lane, both in terms of graphics and gameplay. Astro Newts Megaways by Iron Dog Studio and Hypernova infinity Reels by Reelplay are similar slots to Interstellar Attack in terms of theme. Of course, these two are presented with more modern graphics, so the fan base would be different. Since we do not have the exact max payout potential info about Interstellar Attack, if you want to play a slot with a space theme, you might want to try any of these two titles at our recommended Pennsylvania slots sites and the top New Jersey slots sites, the former offering 20,000x the stake and the latter 2,000x the stake payout potential.

Who makes the slot Interstellar Attack?

Interstellar Attack is a slot developed by the experienced developer High 5 Games.

What is the minimum wager in Interstellar Attack online slot?

The minimum wager you can place on each spin to play Interstellar Attack is 0.20 credits.

What online slots are similar to Interstellar Attack slot?

The space theme is a very popular one, so you will find many slots similar to Interstellar Attack in terms of theme, such as Astro Newts Megaways by Iron Dog Studio and Hypernova infinity Reels by Reelplay.

Can I play Interstellar Attack on my mobile device?

Sure, why not? This is an HTML5 slot that can be loaded and played on any desktop and mobile device, be it a smartphone or tablet, running on Android or iOS.

No. Interstellar Attack is actually a medium volatile slot, allowing for frequent and decent payouts.

Does Interstellar Attack offer a Free Spins round?

Yes, it does. You trigger the 10 Free Spins when you successfully shoot down the telescope Scatter. During the bonus game, the Power-Up feature is enhanced, and you get to play through six levels to get to the most lucrative rewards.

What other features does the Interstellar Attack slot offer?

You have the Spin-Crease meter which upgrades symbols, the Power-Up meter which gives you three different modifiers, including a Multiplier, and of course, the Free Spins round.

How many red asteroids do you need in the Power-Up meter to trigger one of the three special modifiers?

You need to collect 10 red asteroids in the Power-Up meter to get an exploding symbol, a diverter to shoot or the Multiplier of up to 10x.

When was Interstellar Attack released?

Interstellar Attack’s release date is the 8th of September, 2021.