The quarter-finals of World Cup 2022 take place on Friday and Saturday, so this is a good time to take a look at some of the key markets offered by the best betting sites.

There has been plenty of focus on the Golden Ball and the Golden Boot, but they are not the only individual prizes up for grabs in Qatar.

The top-performing goalkeeper, as judged by the FIFA Technical Study Group, will win the Golden Glove, an award which was first handed out in 1994.

So, who are the leading candidates to be named the World Cup’s best shot-stopper? Let’s get into it.

Alisson Becker was beaten for the first time in Qatar in the round of 16, as Paik Seung-ho notched a consolation goal for South Korea in a 4-1 defeat.

Brazil’s electric attack understandably stole the headlines after that victory, but their defence is just as important to their quest for a sixth World Cup.

Alisson is arguably the best goalkeeper on the planet. Comfortable in possession and able to dominate his area, Liverpool’s No.1 is particularly adept at repelling forwards in one-versus-one situations.

That is hugely important for Brazil, while that type of save is also likelier to stick in the minds of fans (and Golden Glove voters).

Alisson is the 3.25 favourite with football betting sites in this market.

But if Brazil’s backline is too effective at denying opponents shots at goal, that might actually work against their custodian.

Martinez In Running as Quarters Approach 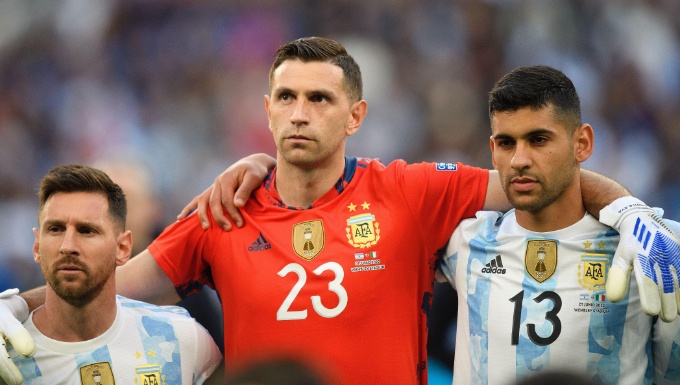 But Lionel Scaloni’s side have bounced back impressively since then, with Martinez keeping clean sheets against Mexico and Poland in Group C.

Australia found a way past the Aston Villa goalkeeper in the round of 16, but Craig Goodwin’s strike was going well wide before deflecting off Enzo Fernandez to leave Martinez helpless.

The 30-year-old, who only made his debut for the national team last year, is a terrific shot-stopper with a good penalty saving-record.

That could come in handy for Argentina over the next week and a half. Martinez is available at 4.50 to win the Golden Glove.

Jordan Pickford has never entirely won over the doubters, but that group is certainly less numerous than it once was.

The Everton goalkeeper has been consistently excellent at club level for a year and a half now, and there is no longer any question of him being usurped by Nick Pope or Aaron Ramsdale on the international stage.

Pickford had a tendency to get too hyped up earlier in his career, but he is a calmer presence between the sticks these days.

He has now kept three clean sheets on the bounce, keeping out the attacks of the United States, Wales and Senegal to help England through to the quarter-finals.

Like every other goalkeeper on this list, Pickford probably needs to reach at least the semis to be in the running for the Golden Glove. Expect his price with World Cup betting sites to shorten from 8.0 if England beat France on Saturday.

Lloris Aiming to Captain France to Glory Once More

Standing in the Three Lions’ way will be Hugo Lloris, who is set to become France’s most-capped player of all time when he takes to the field this weekend.

That is an outstanding achievement for the Tottenham Hotspur custodian, who captained France to World Cup glory in Russia and is looking to repeat the feat four years on.

Lloris, in truth, is probably past his best these days. Errors have crept into his game and he is, relatively speaking, not a particularly effective distributor.

But Lloris is still capable of pulling off world-class saves. And because France give up chances in virtually every game they contest, he is often busier than the likes of Alisson. Do not rule out the 35-year-old, priced at 9.0, in this race.

Livakovic and Costa Among the Outsiders

As things stand Dominik Livakovic and Diogo Costa are outsiders at 15.0 and 21.0 with betting apps respectively, in part because they both have lower profiles than some of the other contenders.

Livakovic is also likely to go out in the next round, with Croatia facing an uphill battle against Brazil.

However, the Dinamo Zagreb shot-stopper has already pulled off penalty heroics against Japan and a repeat performance against the Selecao would boost his chances significantly.

Portugal have the easiest quarter-final opponents on paper in Morocco, so Costa is well positioned to reach the semis.

Counting against him is the fact he has only kept one clean sheet so far, while conceding five goals against Ghana, South Korea and Switzerland.

© PA
Martin Green
4 mins
Qatar vs Ecuador Tips: Preview & Predictions For World Cup Opener
If you are seeking for Qatar vs Ecuador tips you got you covered, as we've got four punts to follow.

© PA
Shaun Cronin
5 mins
Qatar 2022: The Dirtiest Players At The World Cup
Who will be the dirtiest players at World Cup 2022 in Qatar? Gambling.com has analysed the data.

© PA
Martin Green
4 mins
World Cup Tips: Who Will Lift the Trophy in Qatar?
Bookmakers have installed Brazil as the favourites for World Cup glory, but can they win it all?

© PA
Martin Green
4 mins
Australia World Cup Odds: Preview & Predictions On Australia vs Argentina
We preview Australia's Last 16 game at the World Cup with a place in the quart-finals up for grabs.

© PA
Martin Green
4 mins
Australia vs Denmark Tips: Betting Preview With Best Odds & Predictions
We preview Australia's final group game at the World Cup with a place in the last 16 at stake.