One of the finest stayers ever to grace the turf was the French-bred Gladiateur, winner of the English Triple Crown in 1865, and dubbed “The Avenger of Waterloo” by his army of French fans. Owned by Comte Frederic de Lagrange and bred at his Haras de Dangu in Upper Normandy, Gladiateur was sent to be trained by Tom Jennings Sr at Newmarket. Jennings had previously been a private trainer to de Lagrange in France but had moved back to England with some of his employer’s better horses. The year Gladiateur arrived at his yard, he won the Oaks at the Epsom Derby Festival with Fille de l’Air.

A slow learner, Gladiateur showed only minor promise as a juvenile and was lame throughout the winter, but his trainer’s patience paid off as his colt became only the second to win the Triple Crown, improving as he stepped up in trip under regular rider Harry Grimshaw. As well as the 2000 Guineas, Derby and St Leger, he landed the Grand Prix de Paris, then run over 1m7f, and the Grand Prix de Prince Imperial, over two miles.

If he was impressive at three, Gladiateur was imperious at four, winning a series of important races in England and France, including the 3m7f Grand Prix de l'Empereur at Longchamp, which was renamed the Prix Gladiateur in 1869 in the great horse’s honour. It was at Ascot that he enjoyed his most defining moment, however, and ridden by Grimshaw won the Gold Cup by a record 40 lengths having at one stage been tailed off, beating Regalia and Breadalbane in the process. To beat horses of such calibre by a distance, and more having been reported as being 300 yards behind at one point, is the mark of a truly exceptional racehorse.

It’s impossible to understate the importance of Pretty Polly as both a racemare and broodmare. In the latter category, she is responsible for the distaff line which has produced Derby winners Psidium, St Paddy and Workforce as well as a host of other Classic winners, most notably Brigadier Gerard. On the track she won the fillies’ Triple Crown among an unbeaten run which stretched to 15 races from her juvenile debut to her victory in the Park Hill Stakes at Doncaster, which she won just two days after beating the colts in the St Leger. 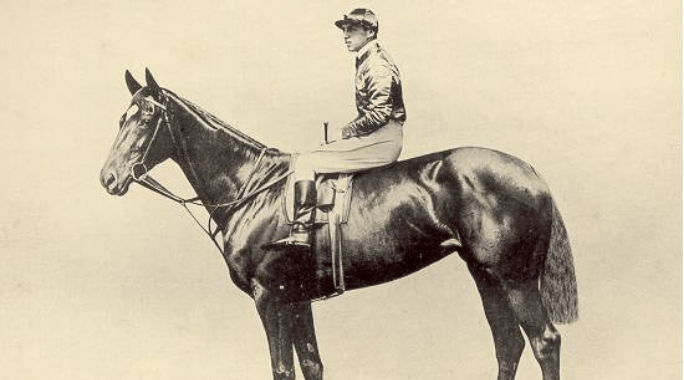 An artists portrayal of the great Pretty Polly

She won all four of her races as a four-year-old, and had taken her record to 22 wins from as many appearances in England when lining up for the 1906 Gold Cup against four others, including Ascot specialist Bachelor’s Button, winner of the 1905 Hardwicke Stakes and Doncaster Cup, and that year’s Derby winner Cicero. Despite the fact that she was virtually unbackable since early in her two-year-old campaign, the racing public adored her like no other, and defeat was beyond contemplation.

Only Bachelor’s Button’s jockey Danny Maher envisaged what was to come. He was convinced that Pretty Polly wouldn’t stay a well-run race over two and a half miles, and while most thought Pretty Polly had beaten his mount easily in the Jockey Club Cup the previous year, Maher was convinced that she was tiring at the line. He convinced trainer Charles Peck to run a pacemaker for Solly Joel’s tough stayer, and in doing so he made the race a true test.

In the straight, only Bachelor’s Button and Pretty Polly counted, but while the crowd were convinced that it was a matter of how far for their great favourite, Maher rode his mount to stick with her, and when jockey Bernard Dillon’s whip was raised inside the final furlong, the truth dawned that she could not get past the doughty Bachelor’s Button, and she failed by a length at the line.

Whatever the excuse, her defeat was a heavy blow to those who had come expecting victory. To say the winner was greeted by silence would be to underplay the sense of shock felt, and racegoers openly wept to think of their heroine beaten. “Alas and Again Alas!” echoed. “Pretty Polly beaten. Lamentations as sincere as they were loud were heard on every hand after the race.”

It’s one of the key features of modern Royal Ascot that as many high-profile international challengers as possible are invited to take on the best that Britain, Ireland and France have to offer. But while Wesley Ward has been making a regular pilgrimage with his explosive two-year-olds, it has not been easy historically to attract the best of the American older generation, with prestige and prizemoney in greater supply across the pond. It was quite a coup when among the entries for the Gold Cup of 1936 appeared the name of Omaha, US Triple Crown winner in 1935. 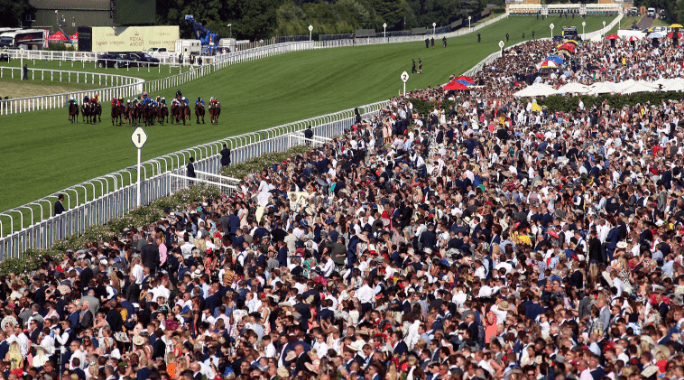 Omaha had no experience of racing right-handed, so was given practice for his Gold Cup task by taking in a couple of races at Kempton, winning the 1½m Victor Wild Stakes, and the Queen’s Plate over two miles, beating Lord Derby’s Champion Stakes runner-up Bobsleigh by a neck in the latter. He headed to Royal Ascot as a warm favourite at 11/8 with bookmakers ahead of the 1935 Oaks winner Quashed.

Quashed made her four-year-old debut in the Great Metropolitan Handicap at Epsom, winning despite a big weight for a filly, and added the Ormonde Stakes at Chester. She was a worthy opponent for the American Champion, and one with no stamina concerns, unlike Omaha, who was stepping up in trip by half a mile.

The race did not disappoint, with Quashed, ridden by Richard Perryman moving up into second place on the turn for home, ready to turn the screw, and Omaha poised under Rufus Beasley, albeit carried a little wide by another rival. Even as Quashed went clear over two furlongs out, it seemed that Omaha had her move covered, but just as Bachelor’s Button had made stamina count 30 years before, so Beasley found that his mount could not quite match the courage or stamina of his rival.

Although the American colt briefly edged to the front, he found the tenacious Quashed fighting back, and trying to switch his whip, dropped it. Omaha shifted out, losing precious inches, and allowing Quashed to nose to the front. Instinctively, he responded again, and at the line the pair were almost inseparable. Almost. The judge gave the verdict to Quashed by the smallest of margins, and both horses returned to a rousing reception.

Such was the nature of the duel up Ascot’s straight, that the clash was dubbed the Race of The Century until such times as Grundy and Bustino reprised their roles in the 1975 King George, and stole that epithet in the process.

The Sensational Disqualification of Rock Roi - (1971)

Few horses are unfortunate enough to lose a Gold Cup at the hands of the stewards but to lose two, to paraphrase Oscar Wilde, seems rather careless. The horse in question was Rock Roi, owned by Mr. and Mrs. Roger Hue-Williams, and trained initially by Sir Gordon Richards.

As a three-year-old, Rock Roi was placed in the Craven Stakes, but came into his own when stepped up to 1½m and beyond, winning two races at Glorious Goodwood, including the Gordon Stakes, and finishing fifth behind Nijinsky in the St Leger. His trainer believed that he would come into his own at four, and the son of Mourne proved him right in no uncertain terms.

A close third in the John Porter Stakes to Meadowville showed that he had trained on, and a second to the outstanding Ramsin in the 2½m Prix du Cadran, the richest staying race in Europe, showed that he had stamina in abundance. Unfortunately, he was also becoming somewhat arthritic and walked out of his box stiff most mornings. Walwyns vet suggested treating him with the anti-inflammatory medication equipalazone, whose active agent, phenylbutazone is routinely referred to as “bute” in racing circles.

Rock Roi started a heavily-backed favourite within horse racing betting circles to win the Gold Cup. Aided by his pacemaker King Of The Castle, he ran out an easy winner from Chester Cup winner Random Shot, only for a post-race dope test to show that minute quantities of oxyphenbutazone, a metabolite of the medication he had been taken. Despite a spirited defence by Walwyn’s legal team, and the guidance on medication altered, the horse had to be disqualified.

In order to prove that Rock Roi wasn’t in any way aided by bute in the Gold Cup, Walwyn ran him during the period of investigation in the Goodwood Cup. Having received no medication since before Ascot, Rock Roi beat Random Shot twice as far at Goodwood as he had the time before, and he went on to add a brave win in the Doncaster Cup. He was undoubtedly the best stayer in the country, but the most cherished prize would have to wait.

In 1972, Rock Roi was at least as good as ever, going two places better in winning the John Porter Stakes at Newbury on his return, and then went to Longchamp to try again in the Prix du Cadran, where he was challenged for favouritism by Irish St Leger winner Parnell. Since landing a host of races as a three-year-old when trained by Stephen Quirke in Ireland, Parnell had moved to the Newmarket yard of Bernard Van Cutsem, who employed Willie Carson as his stable jockey.

Parnell had won the prestigious Prix Jean Prat for Van Cutsem, and so confident were his connections of victory in the Cadran, that they had prepared a table to celebrate their imminent victory, decorated in Parnell's colours, and with champagne at the ready. Sadly for them, the expected victory did not materialise, and despite Carson’s best efforts, Rock Roi proved himself the best stayer in Europe with a length win.

It was only when Peter Walwyn took his owners upstairs for their own celebration that the scene was discovered. As for the vanquished, Parnell did indeed justify their opinion of him and was only narrowly beaten by the great Brigadier Gerard in the King George later than summer. This was just another compliment to the underrated talent of Rock Roi, who now had unfinished business to attend to.

And so it was off to Ascot again, where without Parnell, he faced a weak field and started at the prohibitive odds of 4/11. With defeat seemingly out of the question, but Rock Roi preferred softer ground, and the very fast turf meant that he was not at his best. Passed by the Pat Eddery-ridden Erimo Hawk inside the final furlong, Rock Roi showed that his courage had not deserted him, fighting back to regain the lead close home and win by a head. Unfortunately, in trying to find extra on ground he was hating, Rock Roi shifted markedly left in the last hundred yards or so, and a look at the head on film confirmed the inevitable.

He was disqualified, correctly, but heartbreakingly, for causing interference to the runner-up, and for the second year running victory in the Ascot showpiece had turned to bitter defeat, although it’s some consolation that this brave battler was never aware that his victories didn’t count. Bought by Daniel Wildenstein and sent to France to be trained for the Arc de Triomphe, Rock Roi was unable to stand training on the firm ground which prevailed, and never raced again.