Will VAR Be Scrapped From Premier League Football Next Season?

VAR has dominated the headlines after every weekend in the Premier League this season and the odds on it being scrapped altogether have been cut by bookmakers.

After each round of fixtures in its inaugural season, fans have been reduced to debating the inconsistencies in the use of VAR – which stands for Video Assistant Referee – rather than the wonderful players, the exciting games and the stunning goals.

The Premier League are expected to review the VAR system at the end of the season and the chances of it being taken out of the English game appear to be increasing.

Ladbrokes have cut the odds on the Premier League abandoning the use of VAR in the 2020-21 season from 3/1 to 2/1 amid continued criticism within the football fraternity.

What is VAR in Football?

VAR was introduced to the Premier League in August 2019 to try and resolve controversial decisions, but it has arguably complicated matters further for managers, players and fans, causing consternation in stadiums up and down the country.

Indeed, it has been accused of 'killing' football and turning fans away from the beautiful game and with that in mind the Premier League could act if there’s reason to believe it’s decreasing the quality of their product. 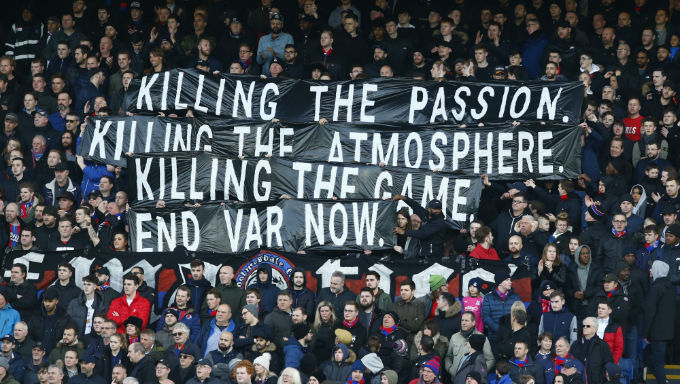 Crystal Palace fans hold up a banner objecting to VAR during a match against Arsenal on January 11, 2020 (© PA Images)

For many, the excitement and spirit of the game is in danger of being damaged by the use of VAR and the emotion of the players on the pitch is being affected with players and managers unsure as to whether to celebrate a goal as they wait for it to be checked.

Players, coaching staff and fans inside the stadiums are often left in the dark for several minutes, staring up blankly at a big screen, awaiting a decision.

The use of VAR to make rulings on offside calls has come in for the most criticism with some goals being disallowed this season because a player's armpit has been in an offside position.

VAR in Other Sports

Technology when used in an efficient manner can enhance a sport like it does in rugby and tennis, who both use similar systems to reach debatable decisions, but right now VAR in football is threatening to spoil the top level of world’s most popular sport.

The Premier League are understandably protective of their brand and it's following across the world, but the introduction of VAR this season has cast a cloud over the spectacle.

As we head into the first Winter Break in the Premier League, we want to know:

The organisation addressed the growing concerns with a statement in November which vowed to improve the standards of the new protocol, meaning VAR will at the very least continue in the Premier League until the end of the 2019-20 season.

Also in November, Paddy Power ran an online poll in which 68% of 5,709 voters said they would prefer VAR to be ditched, but in the intervening months little improvements appear to have been made with patience running out.

© PA
How Soon Could We See The European Super League?