Which Players Have The Best Premier League Penalty Records?

As has been the case on many occasions throughout the history of the Premier League, the addition of one player can make all the difference.

United hope that history repeats itself with the addition of Bruno Fernandes from Sporting Lisbon midway through last season.

The Portuguese playmaker made an immediate impact at Old Trafford and single-handedly turned the club's fortunes around last term.

A season that looked set to end with a possible bottom-half finish ended with a third-place finish in the Premier League which led to qualification for this season's Champions League.

Fernandes ended the last campaign with eight league goals and has started this season with three more.

Of those 11 league goals, seven have come from the penalty spot. He has also scored five from five in cup competitions for the Red Devils.

With more and more penalties being awarded following the introduction of VAR, it pays to have a reliable spot-kick taker which Fernandes most certainly is with 31 of his 34 career penalties finding the back of the net.

Fernandes missed his first penalty for United at Newcastle on Saturday as Karl Darlow pulled off a brilliant save to keep the score at 1-1 with just over half an hour to play. The United man got his revenge later in the game though, scoring from open play as United ran out 4-1 winners.

Fernandes saw his next penalty saved by Paris St-Germain keeper Keylor Navas in their Champions League clash on Tuesday night, but when the kick had to be retaken after Navas moved off his line prior to the kick, Fernandes made no mistake with the second attempt.

Fernandes' penalty miss on Saturday dropped his Premier League percentage from the penalty spot to 87.5 per cent from 100.

So who in the history of the Premier League has the best penalty conversion rate from 12 yards?

As you can see, Southampton's Matt Le Tissier sits top of the list with just one miss from the 25 spot kicks he took for Saints.

Le Tissier is one of those players whose career began in the old First Division and carried on into the Premier League era.

In total, Le Tissier took a total of 48 penalties and missed just one to earn the nickname 'Le God' with Saints supporters.

That one miss was against Nottingham Forest in the inaugural season of the Premier League when Mark Crossley managed to do what no other keeper did during Le Tissier's career which included eight England caps.

Next on the list is Thierry Henry with 92 per cent of his penalties finding the back of the net. The Arsenal striker took 25 penalties and missed two.

Indeed, Henry was involved in one of the most infamous penalties in the history of the Premier League when a pre-planned routine for Robert Pires to tap the penalty to Henry to score backfired horribly when Pires miscued his part.

The French pair were taught how to do it properly last season when Shakhtar Donetsk pulled it off to perfection in a UEFA Youth League game against Atalanta.

Maybe Henry should have taken that penalty against Manchester City and his percentage would be slightly better. 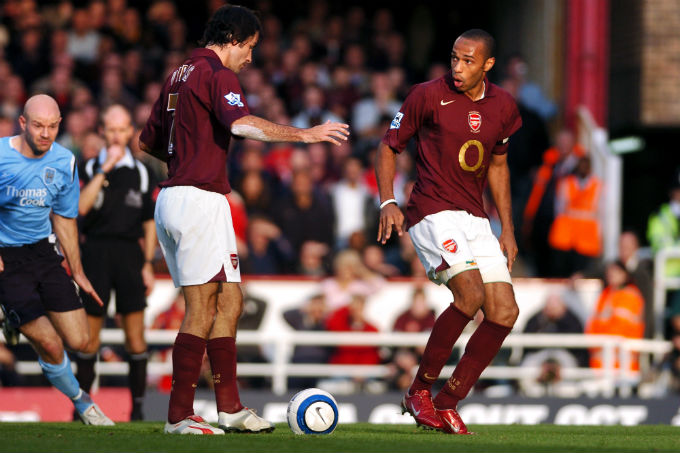 Luka Milivojevic has been Mr Reliable for Crystal Palace when it comes to Premier League penalties.

Since joining the Eagles in January 2017, Milivojevic has stepped up to take 23 penalties and converted 21 of them.

Two of the three goals Milivojevic scored last season were penalties but the Serbian midfielder has yet to score this season.

Former Everton defender Leighton Baines is next on the list with 20 of his 22 penalties beating the goalkeeper. The 35-year-old announced his retirement in June so his percentage will remain at 90.9.

Mark Noble is in the twilight of his career so his opportunities to add to his 27 spot kicks from 30 attempts are going to be limited.

Noble's last Hammers' goal was a penalty in January when he slotted his spot-kick past Casper Schmeichel in West Ham's 4-1 loss to Leicester.

Michail Antonio and Andriy Yarmolenko have both scored penalties for the Hammers since Noble's last success to suggest they will be their spot kick takers going forward.

With more penalties being awarded than every before in the VAR era, there is a chance Le Tissier's record could be broken.

Already this season, a total of 25 penalties have been converted from the 29 that have been given.

The most penalties scored in a single Premier League season stands at 87.

If this season's trend of penalties being called because of the intervention of VAR and the changes to the handball rule, the league is on course to see 220 spot kicks given.

On the flip side, with so many penalties being awarded, teams are spending more time researching the penalty takers they are facing.

If a penalty is awarded, the goalkeeper facing the spot-kick will have all the data he needs to know where the taker prefers to place his penalties.

With that in mind, it would take a brave person to bet on Le Tissier's percentage record being broken.

To put his record into perspective, Fernandes will have to score his next 19 penalties in the league to take his percentage past the Saints' star.

© PA
How Long Will Solskjaer Last As Manchester United Manager?

© PA
Firmino vs Jota: Should Liverpool Drop The Brazilian Forward?

© PA
Flutter Increases Stake in FanDuel to 95% with $4.2B Deal
© PA
Hancock Still Leads Cabinet Sack Race Odds Despite Vaccine Lift
© PA
Who’s Favourite To Win I’m A Celebrity Get Me Out Of Here?
© PA
Ohio State Senator: We’ve Made Progress on Sports Betting Bill
888 to Enter Colorado, Iowa & Indiana Sports Betting Markets
Christmas Number One Betting Odds 2020
By continuing to use our site you agree to us using cookies in accordance with our Cookie Policy .
Got It
×