The Triple Crown is not at stake but the Belmont Stakes on Saturday is a competitive betting race and a chance to take a stand for or against long-shot Kentucky Derby winner Rich Strike.

The third jewel of the Triple Crown is the first start for Rich Strike since the first Saturday in May when he stunned the horse racing world by winning the Kentucky Derby at 80-1. Rich Strike then skipped the Preakness to have additional time to prepare for the Belmont Stakes, the longest of the three Triple Crown races at 1 1/2 miles.

Rich Strike is expected to vie for favoritism with Peter Pan Stakes winner We the People (2-1 morning line) and Mo Donegal (5-2), who finished fifth in the Kentucky Derby.

Looking beyond the top three might be a good strategy: Five of the last 10 Belmont Stakes winners were sent off at 9-1 odds or higher.

In order of morning-line odds

We the People (2-1): Is 3-for-4 lifetime, including a resounding 10-length victory in Peter Pan Stakes at Belmont Park last month. His lone loss was a well-beaten seventh in Arkansas Derby, a race in which he appeared washed out at the start. He’s the controlling speed and has a tactical advantage over all others in the field.

Mo Donegal (5-2): One of two horses in the field trained by Todd Pletcher, who has won the Belmont three times. Had the misfortune of drawing the No. 1 post in the Kentucky Derby, where he broke slowly, was forced 10 wide around the second turn and finished fifth. He beat Preakness winner Early Voting in the Wood Memorial, but he's a late runner and is somewhat pace dependent.

Rich Strike (7-2): Kentucky Derby winner passed on the Preakness to prepare for this. Was 1-for-7 lifetime before the shocking Derby win. Late-running colt won’t get the same hot pace to close into like the Derby, which might compromise his chances. He does face an easier field in the Belmont and won’t have to pass 20 horses this time.

Creative Minister (6-1): Spacing of Triple Crown races is no problem for this gray colt, who won on the Kentucky Derby undercard. He ran third in the Preakness and wheels backs for the Belmont. Was beaten only three lengths in the Preakness and finished well clear of the rest of the field. Logical contender if he wants the distance.

Nest (8-1): Filly taking on the boys adds some intrigue to the Belmont field. Kentucky Oaks runner-up has four wins in six lifetime starts. Only three fillies have won the Belmont Stakes, most recently Rags to Riches in 2007, who like Nest was trained by Todd Pletcher. Clearly has the pedigree to handle the 1 1/2-mile distance.

Barber Road (10-1): Winless in five starts this year, yet has more than $500,000 in earnings after in-the-money finishes in four stakes at Oaklawn Park, Was sixth in Kentucky Derby, a length behind Mo Donegal, after an impossibly wide trip. Gets a change of jockey to more experienced Joel Rosario and will be running late,

Skippylongstocking (20-1): Wasn’t much of a factor in the Preakness, finishing a distant fifth after a somewhat wide but uneventful trip. In 10 lifetime starts, has just two wins and neither was in a stakes race. His speed figures to make him a fringe player and he’s likely to go off as one of the longer shots on the board.

Golden Glider (20-1): Was a non-threatening second in the Peter Pan, more than 10 lengths back of We the People. Won first two career races, but winless in last four. Has yet to win a stakes race and appears a cut below the rest. 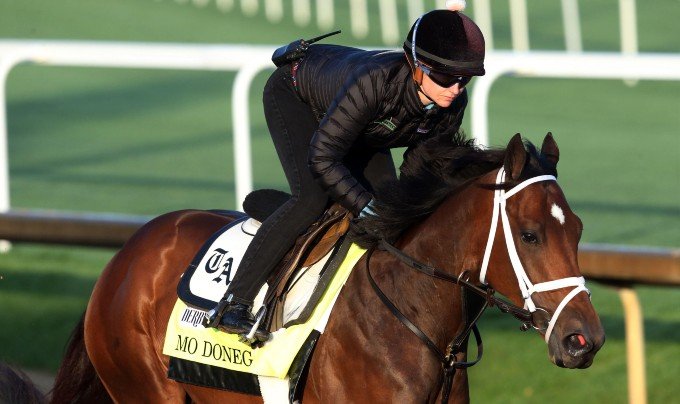 Mo Donegal ran a credible fifth in the Kentucky Derby after a difficult trip from an awkward post. Before that, he won the Wood Memorial by beating Early Voting, who came back to win the Preakness. Mo Donegal has won at Belmont Park before and looks like a horse who will appreciate the added Belmont distance. His lack of early speed is a concern — jockey Irad Ortiz just needs to keep him from having too much to do in the last half mile.

Barber Road is the price play in the Belmont Stakes. He finished a length behind Mo Donegal in the Derby after a similar wide trip in which he passed several horses late. Barber Road gets a jockey change to Joel Rosario and a possible change in tactics. Early in his career, Barber Road showed flashes of early speed and may be closer to the pace this time. An honest horse with seven on-the-board finishes in nine lifetime starts, he’s a must-use in exotic wagers.

Creative Minister ran a solid third in the Preakness and shows an encouraging pattern. Each of his four lifetime starts was better than the last. Another step forward makes him a solid contender here. The concern is if his third start in five weeks will take a toll. Trainer Ken McPeek won this race 20 years ago with 70-1 Sarava.

We the People will dictate all the fractions and may be talented enough to take this field wire to wire, as he did in the Peter Pan. But his previous Grade 1 attempt in the Arkansas Derby was a major disappointment and his three victories were against less formidable opposition. Lone speed is always dangerous, but 2-1 or thereabouts is poor value, especially in a race in which all are unproven at the distance.

Also taking a stand against Rich Strike, who won’t get the same pace set up here and will be hard-pressed to match his Kentucky Derby speed figure.

© USA Today
Chet Fussman
8 mins
Breeders' Cup 2022 Betting Guide
Whatever your preferred method of betting, the Breeders’ Cup offers endless options. All you have to...

Chet Fussman
3 mins
Breeders Cup Classic Could see Huge Favorite in Flightline
The Breeders Cup held its draw on Monday and in the Classic, the field could have one horse that is...