Hansie Cronje was a South African hero. The Rainbow Nation emerged from the sporting wilderness after the end of apartheid in 1991, and returned to test cricket the following April. Cronje made his test debut in their first match back, was made captain two years later and held the post until 2000.

In a national poll in 2004, he was voted the 11th greatest South African of all time. Yet four years earlier he was banned from cricket for accepting money from unlicensed bookmakers for providing information and fixing matches.

The public still held him in high regard afterwards, irrespective of his transgressions, and Cronje was far from the first cricketer to be enticed into lapsing by filthy lucre.

History of Fixing in Cricket

People have been gambling on cricket for longer than most other sports have even existed. The earliest recorded example was in 1646, when a court case concerned the non-payment of a bet made on a match in Kent.

Indeed, the first set of laws for cricket were drawn up in 1744 to enable the settling of gambling disputes. Back then, where betting existed, corruption usually followed.

“Matches were bought and matches were sold and gentlemen, who meant honestly, lost large sums of money, till the rogues beat themselves at last.”

So said Billy Beldham, a legendary 19th Century cricketer. In his era, the ingredients for fixing were greed, poverty and alcohol. Bookmakers would buy booze for players, making them susceptible to monetary offers for throwing a match. It took more than a free pint to seduce Cronje, but avarice led to his downfall.

Gordon Gekko said “greed, for lack of a better word, is good”. It wasn’t for Cronje though, as he explained when testifying at the King Commission, the inquiry into cricket match fixing which occurred after his wrongdoing was exposed in 2000.

“Driven by greed and stupidity and the lure of easy money, I was increasingly pushed to manipulate results and found I had got into something from which it was very difficult to get out,” said Cronje.

So how did he reach that point? The journey had begun five years prior to Cronje’s tearful confession in a Cape Town courtroom.

In January 1995, ahead of a one day international (ODI) against Pakistan, Cronje was offered $10,000 to throw the match. He declined, but a year later his interest was piqued.

‘MK’, as he was known, was a bookmaker who gave the South Africa captain $30,000 to convince his team to lose wickets on the final day and lose the match. Cronje didn’t convey the offer but kept the money.

His team had lost anyway, so where was the harm? "I had effectively received money for doing nothing and I rationalised to myself that this was somehow acceptable because I had not actually done anything," said Cronje.

Harmful or not, he had been hooked by a crooked bookmaker. It was never going to be a one-off case.

The final match of the India tour was an ODI staged as a benefit, a perfect opportunity for fixers. What could be better than a dead rubber of little consequence? Cronje was offered $250,000 to throw the match, so called a meeting asking his side if they wanted to fix the result.

“The team meeting was held the evening before the match attended by all the players in the squad. I conveyed the offer to the team, which rejected it,” he said.

“After the meeting, a few players remained and we chatted about the matter. We were curious to see whether the offer could be increased.”

The initial offer may have been rejected, but the fact they were open to negotiating is telling. And not only with regards to the players’ morality, but also the hold Cronje had over them.

He was above suspicion from the wider world too. However, journalists have since said Cronje’s spotless reputation wasn’t merited. South African cricket writer Neil Manthorp admitted as much to the BBC.

He said: “He did misbehave and he did do some poor things during his reign as captain. There was just an unwritten rule that you didn't mention that. It was in the good of the nation and the cricket team to keep things the way they were.” 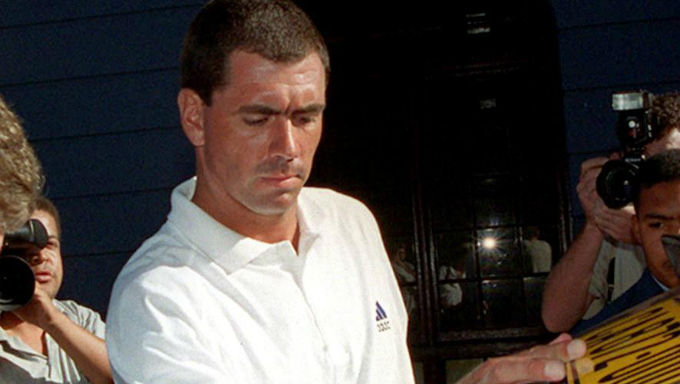 Less than two weeks after the ODI, India were in South Africa on a reciprocal tour. So was ‘MK’. Cronje supplied him with information about team selection for the first test and the declaration score for the second, earning $50,000 for his troubles. He was also offered $300,000 to lose the third test, but refused.

Cronje always maintained he only received money for information, never for fixing. The known payments totalled nearly $130,000, but were there others? After all, he was famously tight and obsessed by money, and happy to make a quick buck whenever possible.

“Hansie was available to anybody with a well-padded envelope full of cash for half an hour in your executive box at the end of any day of a test match,” remembered Manthorp.

And according to Agnew, “he never spent a penny, he never bought a drink, he was as tight as they come. He was fixated with money.” Cronje’s sister Hester backed this up. “He was such a cheapskate, he was always giving away his freebies as Christmas and birthday presents.”

And so to the infamous final test with England, at Centurion in January 2000. South Africa were 2-0 up in the series and rain had decimated the match. There was no chance of an outright result on the final day, and it mattered little. The home side were 155/6, carried over from the first day, and England were +1600 to win.

Cronje suggested they make a game of it, by setting a target for England to chase down. To do so, he became the first (and still only) international captain to forfeit an innings.

The visitors were tasked with getting 249 runs to win, which they duly did. Speaking afterward, England captain Nasser Hussain was full of admiration for Cronje’s actions:

“It was a great gesture from him this morning to try and put on a game. We both chatted, I just said I hope he gets the praise from everyone for the efforts that we both made today.”

Michael Holding, the legendary West Indian bowler, was on commentary duty but was not as enthused. “When this happened I said, ‘If this was in Asia we would all be talking about bookmakers’. The producer was straight in my ear: “How can you back that up?” My fellow commentators shared such sentiments. They thought I was talking rubbish.”

Needless to say, the idea to ensure there was a result did not originate with Cronje, as he explained at the King Commission inquiry.

“On the evening of the fourth day, I received a call on my cell phone. The caller identified himself as Marlon Aronstam (a well-known bookie in South Africa). I do not know where he got my cell phone number. And I had not previously heard of or spoken to him”.

Not knowing him obviously didn’t matter, and neither did the specifics of payment. “Marlon said that if we declared and made a game of it, he would give 500,000 Rand to a charity of my choice and would also give me a gift. We did not discuss either which charity or what the gift would be,” said Cronje.

“After the game, Marlon visited me at the Sandton Sun where we were staying and gave me a leather jacket and 50,000 Rand.”

The jacket and money were, according to Aronstam, a down payment for future information, future pitch reports. As he told the BBC: “If you get pitch reports you’ve got an insight as to where the market is going. You try to look for any advantage you can get when you’re betting on the game, as to whether the pitch is going to be high scoring, low scoring, what type of match it will be.”

Following the England series, South Africa headed to India. While on tour, Cronje accepted the gift of a mobile phone, and was soon receiving upward of 50 calls and text messages a day. Unbeknownst to him, some conversations were being recorded.

One of the people calling was Sanjay Chawla, an Indian bookmaker who was being monitored by Delhi police. They were looking into threats against a local businessman, not investigating match fixing. Yet they were handed evidence of cricket corruption on a platter.

The final tour match was an ODI in a series South Africa had already lost. Sound familiar? Yet another dead rubber, ripe for fixing.

Cronje said: “I was under severe pressure to provide some results. And my attempts to string Sanjay along were no longer effective. The morning of the fifth one day match at Nagpur Sanjay phoned me and urged me to go ahead with fixing the match. And I gave in”.

He conspired with Herschelle Gibbs and Henry Williams to underperform. Both accepted $15,000; the former to score fewer than 20 runs – though he scored 74 – and the latter to bowl poorly, but injury ensured he only bowled 11 deliveries anyway.

In a call with Chawla which was later released, Cronje said: “financially the guys want 25, they want 25 each.” He wasn’t just dragging his teammates down with him, but also creaming off a personal commission from their sordid gains.

And with police having recordings of conversations setting the scam up, what followed was inevitable.

Fall Out And Downfall

He said: “I want to make it 100% clear that I deny ever receiving any sum of money during the one-day international series in India. I want to also make it absolutely clear I have never spoken to any member of the team about throwing a game.

“If you check my cash, bank accounts, that I think is the only thing that's going to clear me because, as I said, you know, I've not received any money.”

It was later revealed Cronje held over 70 bank accounts in the Cayman Islands. It was a poor bluff, which perhaps played on his mind, forcing him to confess two days later. However, Cronje only acknowledged receiving $15,000 for "providing information and forecast but not match-fixing" in India.

In reality, there had been so much more. And two months later, at the King Commission inquiry, Cronje read a 22-page statement which revealed far more about his dirty dealings.

In October 2000 he was inevitably banned for life by the United Cricket Board of South Africa. And tragically, less than two years later, Cronje would be dead. A light cargo plane in which he was travelling crashed in bad weather, killing all on board.

In light of the dubious company he had kept, foul play was suspected. However, a 2006 inquest into Cronje’s death ruled the crash was caused by pilot negligence. Whatever the truth, a sorry chapter in cricket history had been brought to a horrific conclusion.

Cronje concluded his King Commission statement by noting: “As long as there is gambling on sporting events, legal or otherwise, players will continue to be approached, pressured and tempted.”

He wasn’t wrong. In October 2019, Bangladesh captain Shakib Al Hasan became the 26th player banned from international cricket for corruption, after failing to report an approach from a bookmaker. The methods of corruption which ensnared Cronje still linger on.

Writing in the Independent after his death, former England bowler Angus Fraser remembered Cronje as “an excellent speaker, he once spoke at a dinner I attended without notes for 40 minutes, reciting from Hamlet word for word.” And a quote from the play sums up Cronje succinctly: “One may smile, and smile, and be a villain.”