Will More Premier League Stars Reject A Return To Training?

With Troy Deeney being the first high profile Premier League player to reject the opportunity to return to training whilst the global pandemic continues, there is speculation more stars could take up his stance.

On Monday, Premier League clubs voted to resume non-contact training in small groups of no more than five in preparation for a return to football fixtures next month, with sessions permitted to last no longer than 75 minutes per person.

Indeed, there are many stipulations involved, but a Premier League statement said: “The health and wellbeing of all participants is the Premier League's priority, and the safe return to training is a step-by-step process.”

With the support of the club’s hierarchy, Watford captain Deeney will have no part in their initial return to training, citing his five-month-old baby – who has endured breathing difficulties since birth – as his primary concern.

With the UK’s Office for National Statistics highlighting ever-evolving trends in relation to COVID-19, it is understandable that more players could follow Deeney’s lead in order to protect their loved ones.

Former Premier League player Jason McAteer, who played over 100 games for Liverpool and was capped 52 times by the Republic of Ireland, can empathise with current pros.

“I think now we’re well into it, we’re more aware of what this virus is and what it’s doing to people,” he told Gambling.com. “The situation became real very quickly and I think there came a point when everyone realised how important this all was.

“For me, personally, I would also feel that my family have to come first. My mother is 74 and has been in isolation for several weeks, hasn’t been out of the house. She’s scared stiff and the most interaction we’ve had is a conversation from a car window from about 14 foot away.

“I wouldn’t want to be in the situation where I was offered the chance to return to football, but that there was a chance – even a very small chance – that I could catch it and pass it on to anybody in my environment.

“It would change my whole aspect of life. If I was in that situation, I wouldn’t be comfortable going to visit my mother after playing. I wouldn’t want to leave the house at all if I thought there was any slight chance that I had contracted the virus through playing football, and potentially impacting someone else’s life as a result.

“It’s a really difficult position to put players in. It only takes one thing to slip through the net – it’s a contact sport after all.”

For McAteer, the only vaguely similar experience he can draw upon to compare the current predicament with is his memories of travelling with Ireland to Yugoslavia in 1998 and Iran in 2001 while political tensions were at their peak. 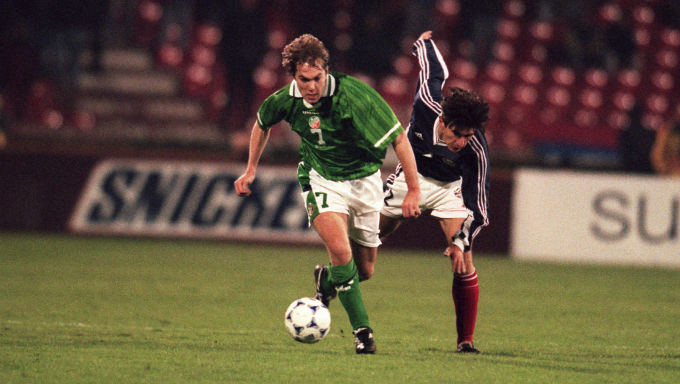 McAteer pictured playing in Yugoslavia in a Euro 2000 qualifier in November, 1998 (© PA Images)

And while the 48-year-old concedes that the situations are very different, he believes modern footballers will be brave enough to reject the opportunity to train or play if they do not feel comfortable with doing so.

“I was thinking to myself if I’ve ever been in a situation where I’ve been asked to play under extreme circumstances and there was a couple of times playing for the Republic of Ireland, albeit they were security issues,” he said.

“One experience that sticks out in my mind was when we went in to the old Yugoslavia, when tensions were really high.

“We were given the opportunity to go and play, or not. I remember the team meeting quite vividly actually. It was a simple question – it won’t be held against you if you don’t want to go, but would you like to go?

‘Bravado Came in to Play’

“I was a lot younger back then and football was different in how we dealt with problems, and bravado definitely came in to play. You didn’t want to be seen as weak and you definitely didn’t want to be the first person to put your hand up and say ‘I’m feeling a bit scared about it actually, I’ve got a family and I’d rather not go’.

“Back then, we would have been afraid of being ridiculed or scared of what people might think. But we were asked the question and no one put their hand up, we all went and we were kept safe with our own security. We were in and out like clockwork.

“The only other example I can think of was Iran. Around that time, 9/11 had happened, and the Iranians were supposedly harbouring Al-Qaeda in Iran – at least that’s what was being reported at the time – so tensions were really high and Iran wasn’t a place you’d really want to visit.

“But we had a World Cup play-off to win and it was a similar feeling to what we went through in Yugoslavia. No one wanted to be the first person to put their hand up. The circumstances are completely different, but that’s the only way I can relate to current players being asked to play when there’s a global pandemic ongoing.”

The Premier League has been pencilled in for a return to fixtures on June 12, but there are already concerns that the date will come too soon. McAteer’s former club Liverpool need just two more Premier League wins in the 2019-20 season to mathematically confirm their first league title in 30 years.

© PA
Is Now The Time To Back Harry Kane For Euros Top Scorer?
© PA
Betting Opens On Joe Biden Completing Full Term Of Presidency
By continuing to use our site you agree to us using cookies in accordance with our Cookie Policy .
Got It
×