How Harry Kane’s Club Form Compares To His England Record

Harry Kane’s 32nd goal for England helped his country wrap up their Euro 2020 qualifiers with a resounding 4-0 win in Kosovo.

It was the first of three goals scored in the final 11 minutes to emphasise the Three Lions’ dominance in Group A, which they won by six points to qualify for next summer’s finals when England will host their three group games at Wembley.

With the semi-finals and final also held at Wembley, England are 9/2 joint-favourites to win their first ever European Championship, and if captain Kane can continue his prolific form for his country they may even eclipse world champions France to claim outright favouritism in the build-up to Euro 2020.

After scoring in every qualifier in Group A, the 26-year-old is now 21 goals behind Wayne Rooney at the top of England’s all-time scoring list, and online bookmakers Bet365 now make it 1/6 that Kane beats the former Manchester United star’s personal haul of 53.

Rooney was 33 when he last represented his country and if Kane plays until he’s 33, he’ll only need to score three goals per year over the next seven seasons to draw level with the man he replaced as skipper.

But the question being asked this season is why is Kane so much more prolific for his country than his club? 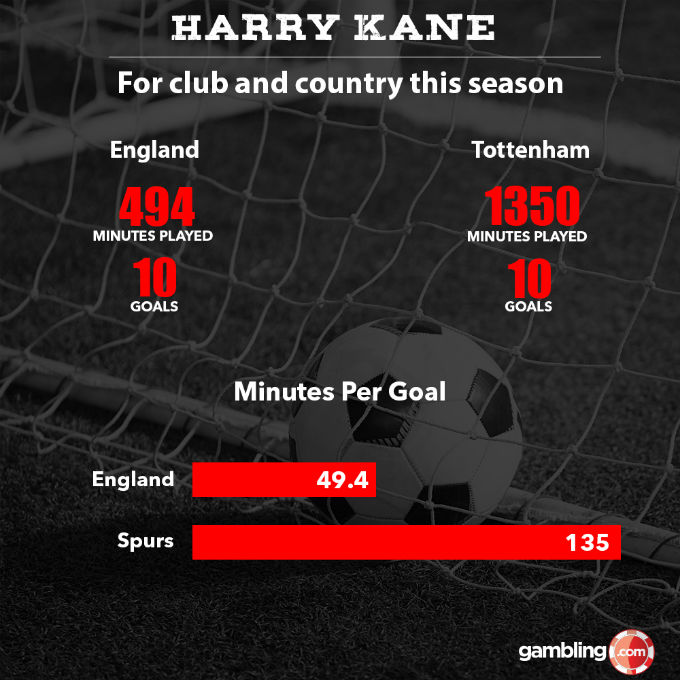 He has 10 goals for both, but the contrast is a concern for Spurs supporters. In the white shirt of Tottenham, Kane averages a goal every 135 minutes, but while wearing the Three Lions he finds the net every 49.4 minutes.

Is it the way Tottenham play that is limiting Kane and his fellow team-mates? Harry Winks and Christian Eriksen, who hasn’t scored in the Premier League since September 1, were also on target on international duty over the break.

While Kane has been in terrific form serving his country, he has scored in just one of the last seven games for Spurs immediately after an international break, including the three in this qualifying campaign. He will hope to put that right when they travel to West Ham on Saturday.

‘It Comes Down To Confidence’

Speaking exclusively to Gambling.com, former Tottenham defender Pascal Chimbonda suggested Kane is scoring more regularly for England because he has more confidence in those around him when representing the Three Lions.

“It all simply boils down to confidence,” said the former France international. “When we’ve seen Kane in a Spurs shirt this season, he hasn’t looked at his best, but yet when he’s on England duty he’s on top of his game.

“When he’s playing for England he has players around him like Raheem Sterling and Jadon Sancho and you can tell he’s on the same wavelength as them. These guys are creating chance after chance for him on international duty and that is fuelling his confidence.

“He’s not quite getting that from his Spurs team-mates so far this season.

“Maybe Pochettino will have to come up with something different in order to get the best out of him. Perhaps he could benefit from having someone alongside him as a classic front two, someone to link up with more closely."

With Kane’s minutes-per-goals ratio having dipped at club level, and given the limitations of England’s opponents in the qualifiers, some critics have floated the idea that the 26-year-old is no longer England’s best striker. 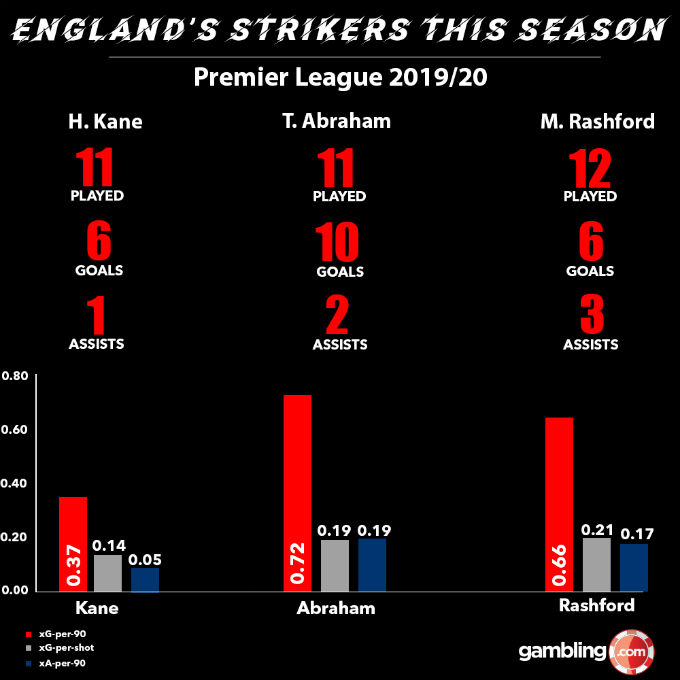 However, Chimbonda refutes such claims, insisting Kane – like Cristiano Ronaldo – can go on to play his best football during the second half of his career, but admits the Spurs striker may have to leave the club if he is to realise his potential.

“I don’t think for one second that Harry Kane’s best days are behind him,” said Chimbonda.

“When you look at someone like Cristiano Ronaldo, he’s 34 and you could argue that he’s as good as he ever was. Ronaldo improved after his mid-20s and I don’t see why Kane can’t do the same.

“The only question is, will he be able to improve if he stays in the Premier League? Ronaldo had to leave Manchester United to reach another level at Real Madrid.

“If Kane was to stay at Spurs, and they don’t improve much, can he fulfil his individual potential? If he goes abroad maybe to a Spanish team he could improve more and more and win more and more.

“He still has plenty of time, so there’s no rush to leave. And I don’t think his club form is anything to be worried about – he’s still got 10 goals this season, which isn’t bad.

“Sometimes strikers just need a little confidence in those around them as well as themselves, and maybe Harry doesn’t quite have that at club level right now.

“But all it will take is for him to score three or four goals in two or three games for Tottenham and everyone will be saying ‘he’s back’ – so I’m not concerned at all.”

Former right-back Chimbonda does not believe Kane has the desire to leave his boyhood club, but if he did, a powerhouse club may have to break the world record transfer fee – the €222million Paris Saint-Germain paid Barcelona to sign Neymar in 2017 – in order to convince Daniel Levy to sell.

“If Harry Kane was to go to Daniel Levy and say ‘listen, Mr Chairman, I want to leave so I can go play in a big team and win trophies’ then I think Levy would maybe let him go. 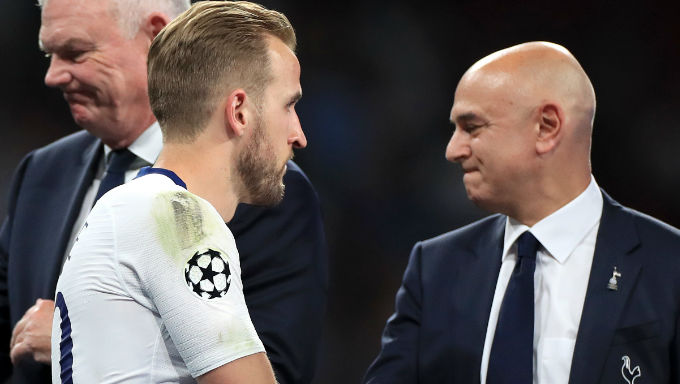 “But unless Kane makes that move, I don’t think he’ll leave. He seems happy there, he’s a Spurs boy, he’s the main man and he’s got everything he needs. If he stays, he will be the club captain pretty soon too, so maybe he won’t ever want to leave.

“Levy is a shrewd businessman. When he does business, he does it well. We saw it with Gareth Bale when he sold him to Real Madrid – he held out and held out until he got the absolute maximum Madrid would pay for him, which turned out to be a world record fee.

“If he was to sell Kane, you know Levy is not going to let him go lightly. I don’t think he’d accept anything less than what PSG paid Barcelona for Neymar so it might have to be another world record if anyone wanted to buy him.

“I wouldn’t put it past Real Madrid, Barcelona or even PSG paying that sort of money though, because what we’ve seen over the past couple of years is that money is no real object if one of the top, top clubs really want a specific player.”

For all Kane’s exploits in an England shirt, his club-mate Dele Alli has been left out of the last two England squads as his Tottenham form continues to elude him.

With just five Premier League goals and three assists last season, Alli’s loss of form and struggles with injury have carried over into the current campaign.

Bookmakers Bet365 have opened a market on who will make Southgate’s final 23-man squad for next summer’s tournament, and their traders are somewhat sceptical about the attacking midfielder’s chances of making the grade, going 5/6 on Alli.

Chimbonda, however, is much clearer about the situation, admitting Alli is not making life difficult for Southgate with his current club form.

“At the moment, it’s really hard to see how Dele Alli gets back into the England set-up,” said the Frenchman. “He’s got to hit some form very soon because there aren’t too many international opportunities between now and next summer’s tournament.

“He’s going to have to force his way into Gareth Southgate’s plans through his club form, but it’s difficult to see how he’s going to do that because it’s just not happening for him at the moment. 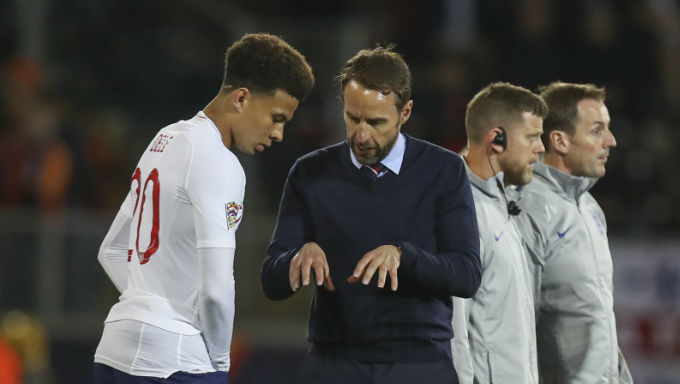 “England have enough people firing, they’re scoring lots of goals and clicking well. Southgate has no reason to disrupt that flow, so I fear for Alli, I think he’ll miss out.

“But you never know, sometimes all it takes is one goal, one moment of magic to rejuvenate a player’s season, and injuries could yet force Southgate to reconsider Alli. We’ll just have to wait and see, but the onus is on him to rediscover his form.”

In the meantime, Chimbonda still believes Mauricio Pochettino is the right man to get Tottenham out of the current hole they find themselves in – some 20 points off the top of the table and 11 points behind fourth-placed Manchester City.

“They definitely need to sign one more striker, whether that’s as a direct back-up to Kane or someone to play alongside him if Pochettino decides to change shape,” he said.

“If they want to get back up the table and compete for third and fourth place then they need to become less reliant on Kane’s goals.

“They can forget about going for the title – 20 points off the top is far too far off the pace – but if they can bring a striker in and maybe strengthen the defence, then they might be able to claw their way back into top four contention.”

Spurs have drifted out to 4/1 to finish in the top four, while Pochettino is second favourite in the sack race betting odds at 5/2.

© PA
Is This Premier League Campaign The Season of Comebacks?
© PA
How Bruno Fernandes Transformed Manchester United in a Year

© PA
Why Prince Khalid Abdulla’s Passing is a Great Loss For Racing
By continuing to use our site you agree to us using cookies in accordance with our Cookie Policy .
Got It
×