Lack of Conviction Starting to Tell on Unai Emery’s Arsenal

Unai Emery’s decision to replace Granit Xhaka with Bukayo Saka in the 61st minute of Sunday’s 2-2 draw at home to Crystal Palace led to an angry confrontation between the Gunners skipper and Arsenal fans near the tunnel at the Emirates.

A number of Arsenal supporters have criticised Emery for not knowing his best team due to the number of changes he has made in the Premier League, especially during the half-time interval.

Since taking over from Arsene Wenger at the start of last season, Emery has made unforced half-time substitutions in 21 games, involving a staggering 25 player changes in the 48 Premier League matches he has been in charge of the Gunners.

In stark comparison, Arsene Wenger made only five half-time substitutions in his final 48 league games at the Emirates, despite the constant pressure and calls for him to depart from a large group of supporters that were very openly #WengerOut. 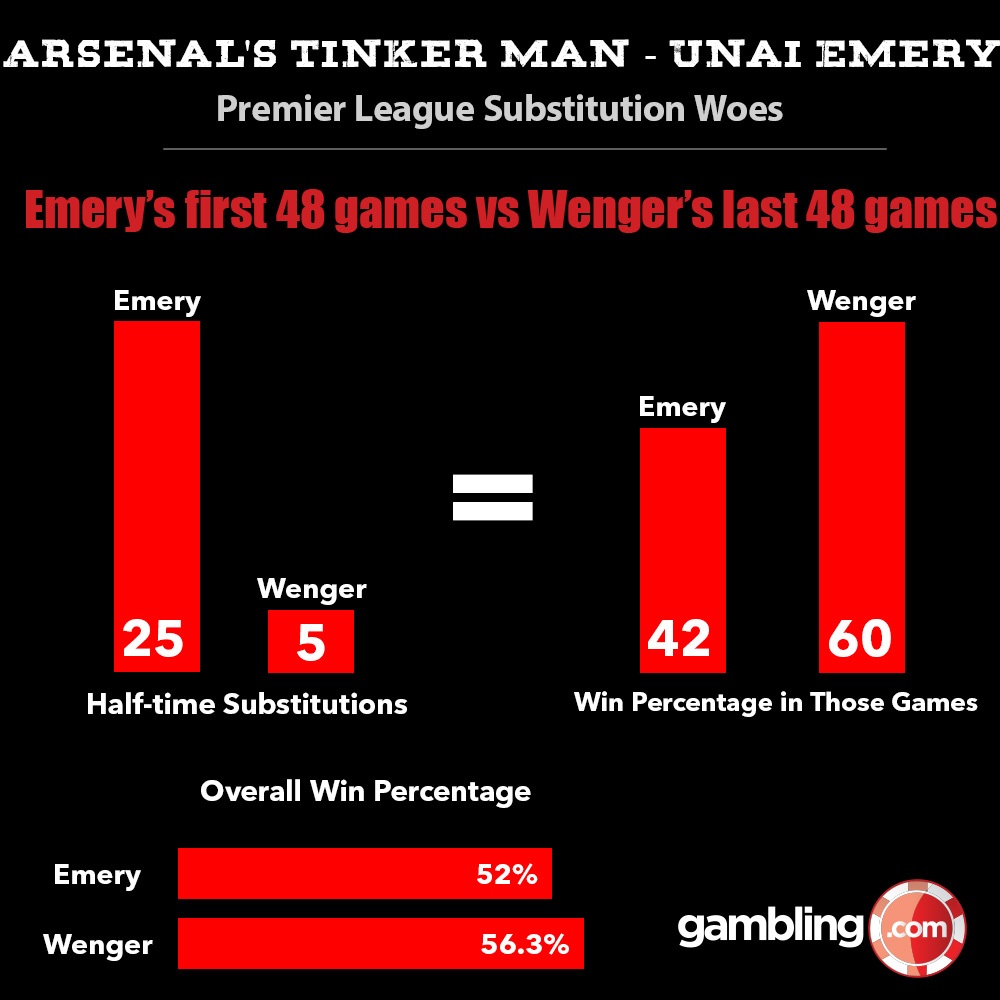 Statistics show just how much Emery tinkers with his team at half-time (Data: Charlie Mullan)

Digging deeper, Emery has made 18 of those 21 half-time change-ups when his side has been level or trailing at half-time. After making his substitutions, Arsenal have still failed to win 11 of those matches.

It suggests that not knowing his tactics and his ideal team set up prior to the game has been Emery’s biggest problem at Arsenal to date. Nine of the 21 league games Emery has made substitutions during half-time came when the Gunners were losing and, despite the corrections and with 45 minutes still to play, they have only come away with the three points on two occasions.

Wenger historically showed conviction to his plans where perhaps Emery is quick to abandon his, and it has seemingly had a knock effect to his side's performances on the pitch.

Emery’s win percentage overall as Arsenal manager across all his games in charge is only marginally worse than Wenger’s, 52% v 56.3%, but dramatically poorer at 42% when he tinkers at the half-time break.

Wenger only made similar moves in five games of his final 48 and managed to win three, draw one and lose just one of those games.

‘He’s Being Quite Brave’

Emery continues to have the opposite effect on his side when swinging the early axe on his starting line ups.

Speaking to Gambling.com ex-Arsenal legend Nigel Winterburn reckons this is something that if the squad aren't used to by now, then they better get used to it whilst Emery remains in charge.

"He's made a lot of decisions at half-time, and just after half-time throughout his time at the club.

"In fairness, I felt Arsenal seemed to be stronger in the second-half than the first-half in the majority of those games so he obviously wasn't happy with their first-half performances and acted accordingly. I'm surprised the number of half-time changes is as high as it is, but in another way, I'm not that surprised. It's something he seems to do. It looks like that trend will continue. 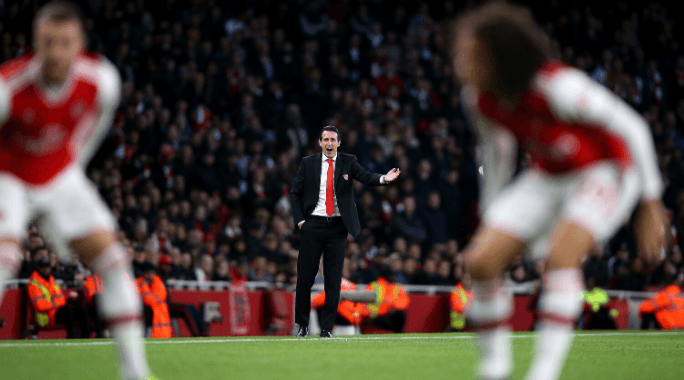 "In a way, you could say he's being quite brave because if he sees that something isn't working he's made a quick change to try and turn that around. Now the stats are saying these changes are not making a significant difference.

"It's something the Arsenal squad are used to and if they're not, they are going to have to get used to it."

How Long Will Emery Get as Gunners Boss?

"All clubs are looking and analysing what's happening at their club. I've always said that when Unai Emery came in he would get at least two years. Last year it wasn't his team.

"Now he's had significant funds this season to make those changes. He's brought in younger players which I agree with. But I would think that if Arsenal don't get into the top four there will be a review.

"They can't get into the same position as with Arsene Wenger where 50% of the supporters want him to stay and the other 50% want him out and every time something goes wrong on the pitch it's almost as if the supporters are in crisis with each other.

"It wasn't pleasant sitting and watching those games at the very end of Arsene's reign. It was very uncomfortable as a former player to watch on from the sidelines."

Who Could Replace Emery – Would Mourinho Fit the Bill?

"Mourinho is a terrific manager in terms of records and the players he could possibly get to the club", explained Winterburn. "I just don't know if he would sit right with the Arsenal supporters, or if that's the line the board would go down.

"I get a feeling that if things don't work out for Unai Emery they may look to switch to a new and upcoming young manager. I don't know if they would be as brave to go with someone like Ljungberg or Arteta. They may be terrific coaches but when you take that manager's role it steps up another couple of levels again.

"I would say keep an eye on what's happening with Patrick Vieira. If someone like that could prove they are able to run a club in the right way then Arsenal may look towards them eventually.

"Unai Emery could get everything right in the next 3-6 months. If he can get back into the top four and the Champions League, he could very well be with the club for a decent spell longer."

The top betting sites will be keeping a close eye on Arsenal's fortunes under Emery given the interest in such a high profile job possibly being up for grabs.

Emery's Premier League Record Is a Tale of Two Halves

As the data shows, Arsenal's HT/FT record since the start of 2017/18 season underlines Emery's failure to get his starting XI correct regardless of the opposition he has faced in the Premier League. 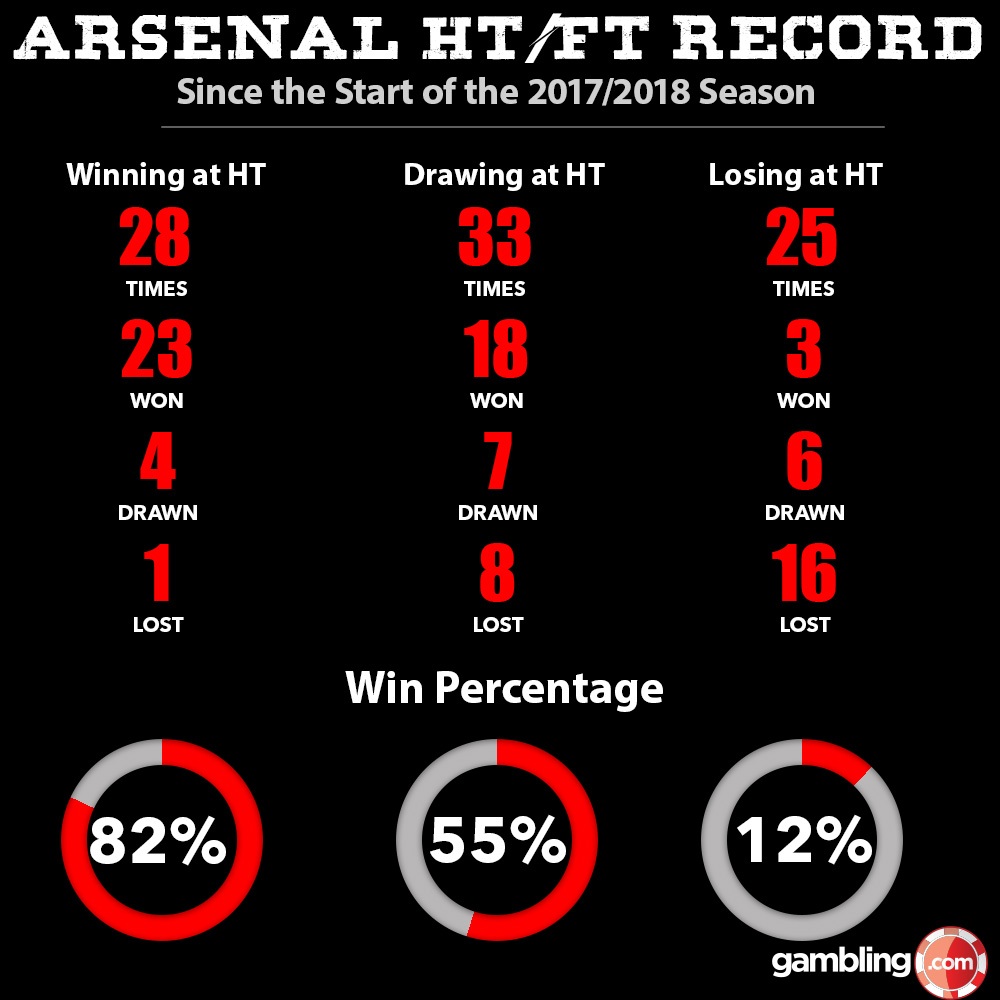 Numbers show that Arsenal have a terrible record when losing at half-time (Data: Charlie Mullan)

Arsenal take on Liverpool this Wednesday night in the League Cup and it will be Emery's fourth meeting against the Merseyside giants in a fixture he has yet to lead at half-time in any of the previous three meetings.

The Gunners have a poor record against Liverpool, with no wins in their last nine meetings since Arsenal beat the Reds 4-1 on April 4, 2015. Incidentally, this was a game in which they did get to the break ahead

Will Emery be able to resist the temptation to make changes if his side are losing at Anfield tonight, it's surely odds on that he won't?

Emery knows progression in the EFL Cup could help him stave off the pressure of the notoriously vocal Arsenal fan base, but this is a massive fixture in which to do just that. A solid starting line up and conviction in his tactics could be key.

Winterburn continued: "Every competition is important during a transitional stage. Arsenal's record at Liverpool of late is poor, to say the least. I think to go to Anfield and win, under the presumption that both teams will be greatly different, would still be a huge boost for Arsenal."

"Eventually, we have to sort out our away form which has been terrible for the last two years. It would certainly build confidence within the squad as well."

© PA
Are Manchester United in a Worse Decline Than 90s Liverpool?